A historic sloop thought to be more than 130 years old was removed from the H. Lavity Stoutt Community College and thrown away at the direction of Dr. Angel Smith, HLSCC …

END_OF_DOCUMENT_TOKEN_TO_BE_REPLACED 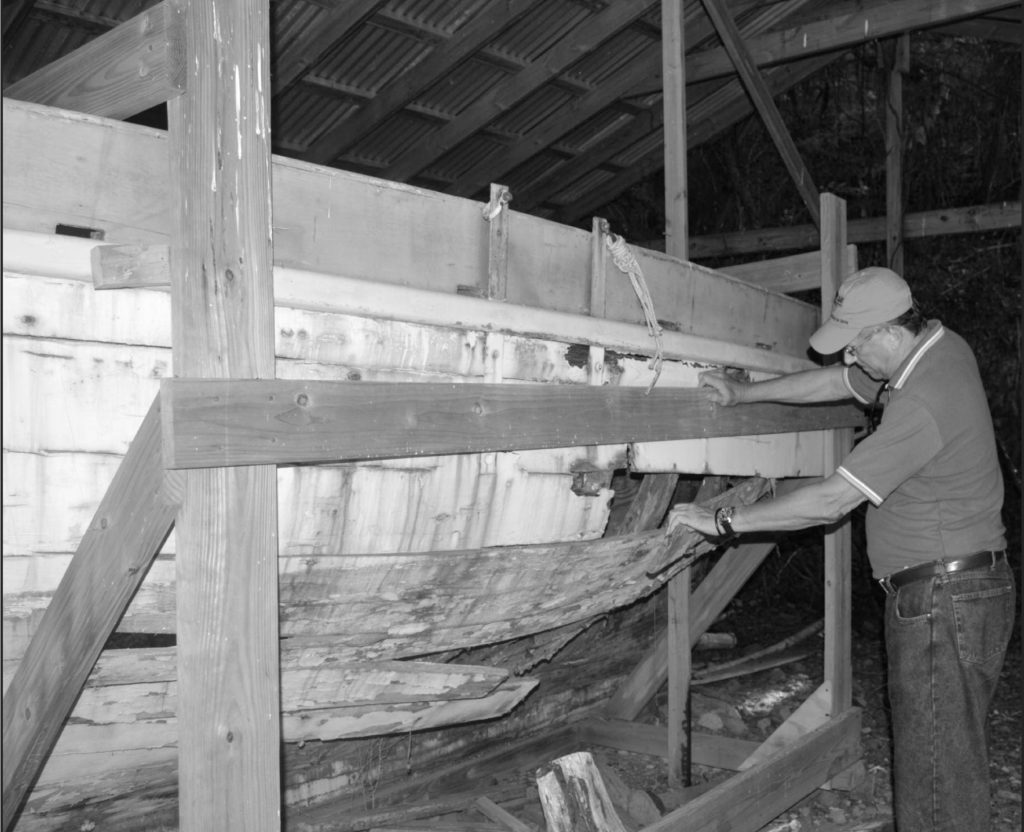 The above file photo shows the sloop Vigilant in 2016 in the shed that was constructed to house it beside the marine centre.

A historic sloop thought to be more than 130 years old was removed from the H. Lavity Stoutt Community College and thrown away at the direction of Dr. Angel Smith, HLSCC President Dr. Janet Smith confirmed last week.

Dr. Angel Smith, who previously directed the Virgin Islands Studies Institute, has served as the college’s director of recovery since shortly after Hurricane Irma.

In a written statement provided to the Beacon, the president said the institution had not made any decision about the future of the damaged sloop Vigilant — which some believed to be the oldest existing wooden boat in the Caribbean — when it disappeared from the campus two weekends ago.

“On the weekend of March 24, Vigilant was lost to clean-up efforts under way at the direction of the college’s director for recovery,” the president wrote in an e-mail last Thursday, two days after the Beacon first inquired about the boat’s whereabouts.

“Acting on his own, the director had determined that the Vigilant was no longer significant, nor could any portion of it be saved for historical purposes. The college sincerely regrets the loss of this very special and significant vessel at this time and in this manner,” the president added, although in a revised statement sent a few hours later she deleted the first sentence and the phrase “in this manner.”

Dr. Angel Smith declined to provide further information about why Vigilant was suddenly removed and where exactly it was taken.

“As you already spoke to the president, I don’t see why you’re calling me,” he said when reached by phone on Tuesday. “You said you spoke with the president, so that’s it.”

Dr. Janet Smith would not say whether the incident would impact the director’s job at the college, but said he reports to a recovery committee that is headed by the chairman of the college’s Board of Governors.

“This is a full-time job that involves such responsibilities as clean-up, repairs, re-consideration of the use of facilities, oversight for re-construction of facilities, etc.,” she wrote.

Attempts to reach HLSCC Board of Governors Chairman Dr. Charles Wheatley and Education and Culture Minister Myron Walwyn were not immediately successful.

Before Irma, Vigilant was kept under a shed on the HLSCC campus, next to the Centre for Applied Marine Science, as it awaited restoration.

After the shed was knocked down in the storm, the historic boat sat freshly damaged and exposed to the elements until it was thrown away late last month.

But in spite of the damage, Geoffrey Brooks, curator of the Virgin Islands Maritime Museum, said the sloop was “definitely salvageable.”

“The boat was very much restorable and there were people that were interested in doing it,” he said on Tuesday. “And you know … with an artefact that is really old, it doesn’t matter what condition it’s in: It’s still a valuable piece of history. Even if this boat couldn’t sail again it could be made a museum piece. And that was certainly still the case.”

Mr. Brooks has advocated for Vigilant to undergo repairs since at least 2016.

Government Culture Director Luce Hodge-Smith said early last week that she was unaware the vessel had been moved, but said this week that “someone” at the college had called to inform her about it shortly after the Beacon’s inquiry.

She was not consulted about Vigilant’s fate before it was destroyed, she added.

“It’s just disheartening,” she said. “I wasn’t called as the director of culture for consideration for it not to be destroyed.

The college acquired Vigilant in 1997 from Trellis Bay by “sheer persistence,” Dr. Janet Smith wrote in her statement. The sloop was built around 1881-82 by William Penn of East End.

“Up until about 2012, she participated in just about all the local regattas including races on August Tuesdays between the chief minister/premier and the governor. In 2012 she ran aground at Sopers Hole and was retired at that time,” the president wrote, adding, “Vigilant represented an invaluable part of BVI history.”

The HLSCC logo itself depicts a sloop, Dr. Katherine Smith, the acting director of the VI Studies Institute, pointed out in a Facebook post.

“The sloop is our territorial gift, was made from our territorial tree, is on our territorial dress, is on the HLSCC logo. And the oldest tangible evidence we were known to have of these sloops is no more? Why?” she wrote. “We are playing dangerous games with our heritage.”

Ms. Hodge-Smith agreed that the loss of Vigilant impacts the territory’s sense of identity.

“Any decisions we make, we have to ask ourselves the question first: Where does it leave the generations to come? Without our cultural identity, who are we? You don’t make that decision on your own. Ask somebody that question,” she said.

“It’s a piece of our history that is long gone that we can never bring back — a symbol of Virgin Islands heritage.”

The impromptu scrapping of Vigilant felt personal for many.

Mr. Brooks, for one, has spent years studying the design of sloops and tending to the last remaining ones in the territory. He helped craft the boat Sea Moon with an Anegada shipbuilder in 2003 and wrote a book about the experience.

In November, he said he still had hope that Vigilant could be restored as a museum piece. Now, though, that option is gone.

“The loss of that boat broke my heart,” he said on Tuesday.