Sharks, seas no match for Wahoomania

Waves were rough but skies were clear early the morning of April 16 as five teams set out from Virgin Gorda, all hoping to see that first flash of silver …

END_OF_DOCUMENT_TOKEN_TO_BE_REPLACED 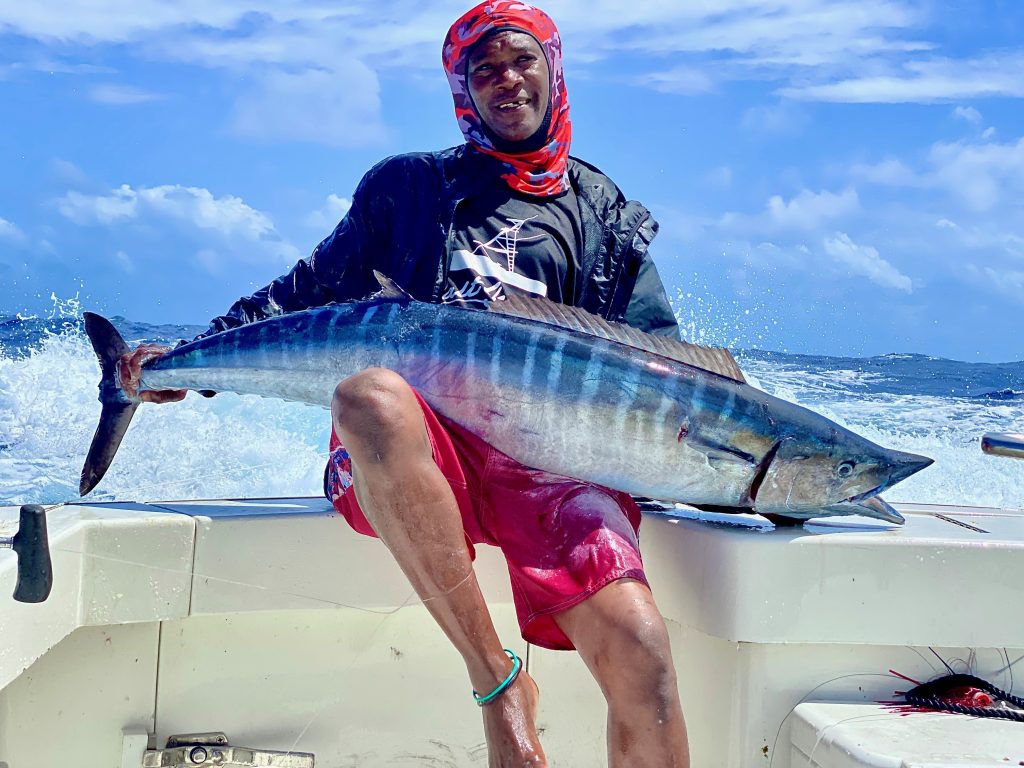 The team aboard the Salt Shaker won the $3,000 grand prize for biggest wahoo of the day during the Wahoomania fishing tournament out of Virgin Gorda on April 16. (Photo: DANA KAMPA)

Waves were rough but skies were clear early the morning of April 16 as five teams set out from Virgin Gorda, all hoping to see that first flash of silver and blue during the 2022 Wahoomania fishing tournament.

Jerome Emmanuel Sr. from Bad Dog Charters won for the second heaviest wahoo at 36.26 pounds, and secured the heaviest overall weigh-in of sportfish caught that day with 107.52 pounds. Eight-year-old Jerome Emmanuel Jr. also took home $300 for being the youngest angler to catch a fish in the tournament.

Teams faced some tough conditions as a few catches were snatched by sharks and the waves were enough to occasionally unsteady even the most seasoned sea legs, but participants were eager to get out and compete for a title. 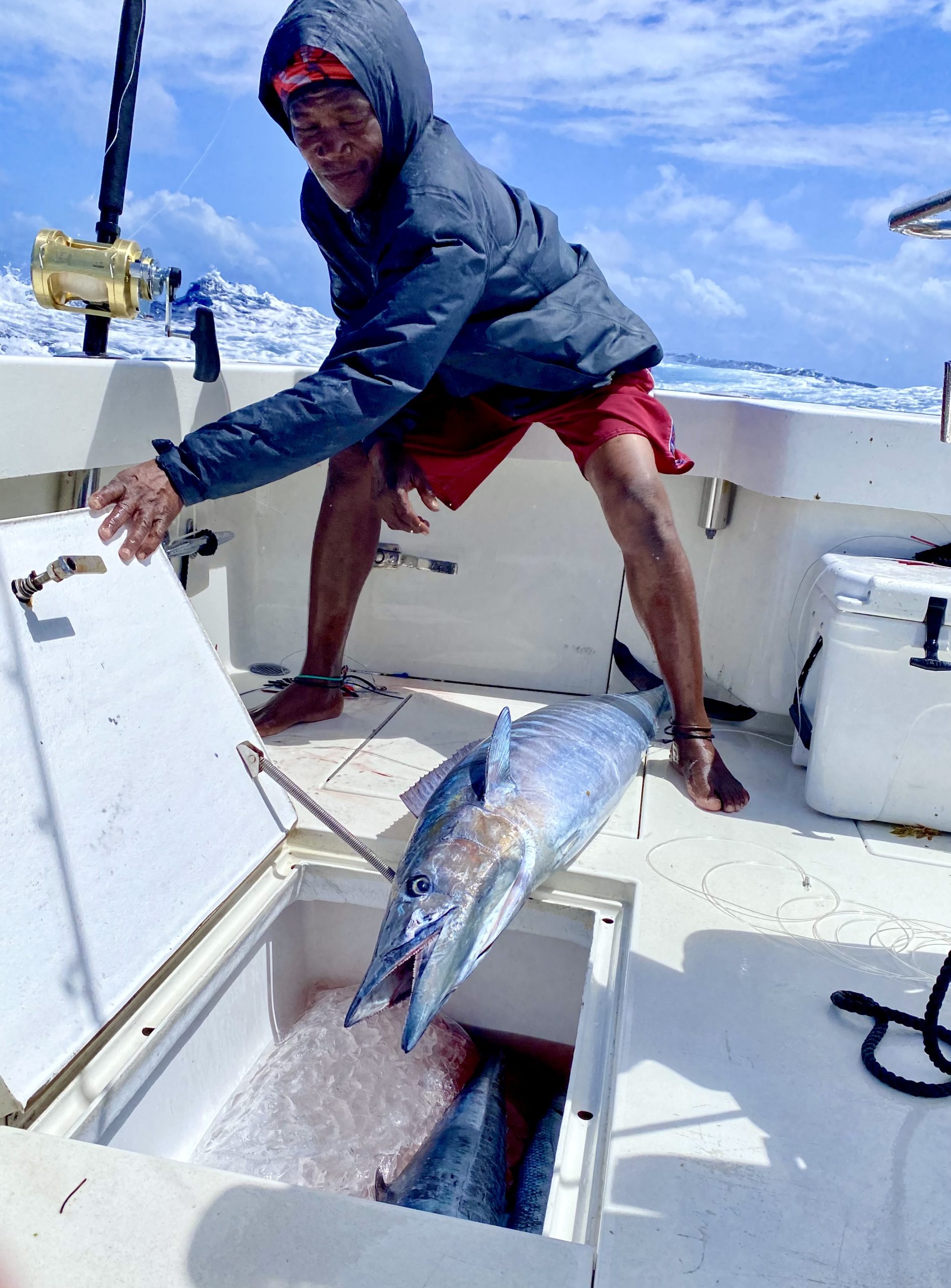 As the sun rose, boats headed out of Spanish Town to hit the open water near Virgin Gorda, where captains hoped to navigate to promising fishing grounds in time to capitalise on the moment when opposing currents would let the big game fish more easily rise from the depths. The captains had some tough decisions to make considering the goal wasn’t just to have a great day of fishing, but to find the biggest fish out there.

Aboard the Salt Shaker (www.saltshakerbvi.com), there was an early flurry of activity as a few barracuda hit the deck and some fish shook a hook before breaching, but no wahoo appeared.

From there, several boats quickly trolled to the north side of Anegada, chasing frigate birds and any other signs that fish were nearby. The Salt Shaker crew tied on fresh leads, frequently checked that bait was fresh, and waited in anticipation at another shot to land the fish of the day.

Finally, the squeal of fishing line peeling out from the reel was heard across the boat, and the team leaped into action.

Captain Chad Lettsome and his nephew William Bridgewater handled steering the boat and clearing other lines out of the way. Mr. Lake hopped in the chair and worked to keep steady pressure on the line, one of the biggest challenges with landing a wahoo. It was no easy task with waves pitching the boat to and fro.

Eventually, the sapphire blue back of the fish appeared, skimming along until Messrs. Bridgewater and Lettsome helped pull it onto the back of the boat, bringing with it smiles and high fives for getting in the race.

Seas calmed slightly in the afternoon while crews hailed one another and tried to gauge how the tournament was progressing.

The team aboard Salt Shaker swapped stories of the biggest wahoo they’d seen while landing a few other gamefish, but the captain’s attention was on finding the big one.

Excitement rose with another call of “fish on!” and Mr. Lake could tell by a hefty bend in the rod that a potential prize-winning fish was on the line. A battle ensued that frequently required both hands, only for the fish to make repeated dives back down. When the fish broke the surface, it was confirmed to be a sizable wahoo, and the crew tensely watched each time it skipped over the waves.

The wahoo finally rose to the surface, and with an iridescent flash of stripes it slid aboard the boat. The team knew that fish alone put them in good standing, but they didn’t know for certain how their competitors were doing, and three hours remained before the final weigh-in at Virgin Gorda Yacht Harbour.

Mr. Bridgewater then reeled in a tuna, adding to the total gamefish bag. Just as the captain was planning out exactly when to start turning toward home, the reel again started singing. Mr. Lake had another gamefish on the line, but this time it was a mahi-mahi.

At one point it was unclear if the fish was still on, but when it landed onboard the reason became clear — getting grazed by a shark. After catching fish “from wire to wire,” the boat raced back to the dock to beat the clock.

Mr. Lettsome said it was a tough day out on the water, but it ended up being a great day of fishing. Joseph Lake Jr., who joined the trip that day, said he was already eager for next year’s tournament.

As the boats came to harbour around 5 p.m., they were met with supporters eager to hear about the day and a wheelbarrow to take their catch to the weigh-in station, where everyone crowded closely around to see how they fared.

Mr. Lake’s mahi-mahi wasn’t the only fish enjoyed by the sharks that day, as one tuna was bitten clean in half. Still, every pound was taken into account while crews shared their stories about navigating the strong seas.

Community members cheered on the winners as they collected their awards at a ceremony supported by the Virgin Gorda Fishermen Cooperative. The organisation hosts annual summer programmes to teach youths about marine-based industries.

With the pending passage of legislation to update fishing regulations in the territory, Dr. Wheatley said leaders hope to better facilitate sportfishing events and the industry as a whole.

“Even bigger and better things [are planned] for fishing in the Virgin Islands,” Dr. Wheatley added.

Thomas Warner, who organised the event with VGFC President Michael Collins, said they were glad to once again be able to hold the event following the difficulties caused by the pandemic over the past two years.

Mr. Warner said he appreciated the government’s commitment to moving forward with sportfishing as an industry in the VI, especially as a potential career path for young people.

“It is very important that as sportfishing recovers in the territory that BVIslanders get to play a role in this very important sector of tourism,” he said. “Grassroots tournaments like this one are often a person’s first taste of competitive fishing, and it is so important that we keep the sport accessible to all of us.”