Government awarded four firms a total of $11 million in contracts on Friday to begin the long-delayed revamp of Elmore Stoutt High School, which is expected to reunite the entire …

END_OF_DOCUMENT_TOKEN_TO_BE_REPLACED 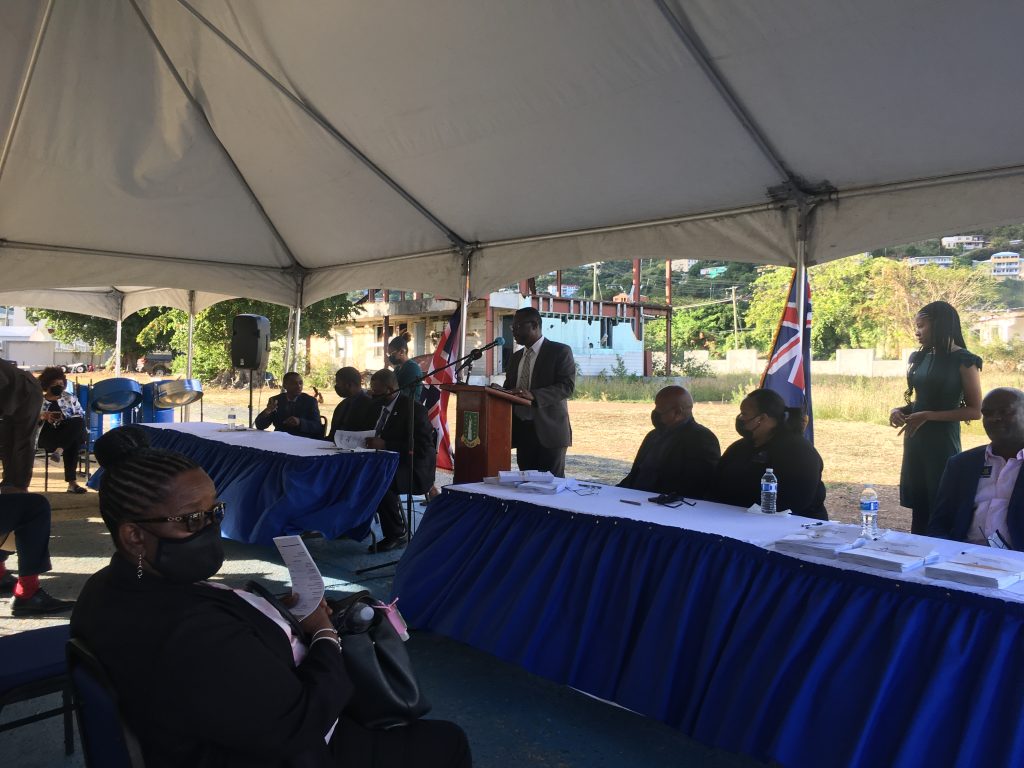 Premier Andrew Fahie, left of the podium, signs contracts worth $11 million on Friday with representatives from four firms for the reconstruction of Elmore Stoutt High School. (Photo: CLAIRE SHEFCHIK)

Government awarded four firms a total of $11 million in contracts on Friday to begin the long-delayed revamp of Elmore Stoutt High School, which is expected to reunite the entire student body on a single campus after more than four years.

But a $4 million funding gap will need to be filled to fund those contracts and complete the project, according to government officials, who are asking businesses to step up and donate.

In remarks during the contract-signing ceremony, Premier Andrew Fahie announced that even though the sum of the contracts overran the initial Recovery and Development Agency estimate for the construction by $4 million, teachers and students cannot wait any longer to reunite on the campus that was devastated by Hurricane Irma in 2017.

“If we push this project back anymore, who knows how much material costs will go up further to, or what else might come,” Mr. Fahie said. “We will not defer this project anymore and extend the suffering of our students and teachers and the administrative and support staff any longer than necessary.”

He added that all students could expect to return to the main campus for the start of the new school year in September.

The complete project — first unveiled at a meeting in January — consists of three interconnected buildings consisting of a new junior school, a new amphitheatre, a technical block, a classroom block, and an administration block. The blocks will be constructed first. The planned classroom block consists of two buildings, both of which will be three storeys tall.

Both buildings together include a total of 42 classrooms that each can accommodate 20 to 25 students, divided into separate construction packages, according to the January plans.

Representatives of each company spoke at the ceremony, promising to deliver on time and on budget.

Brian Marshall of Metro Construction said he was keen to help with such a key project in the territory’s recovery strategy and help get students back into a proper school building.

“The redevelopment of the Elmore Stoutt High School will be a challenge for all of us, all the stakeholders, given the timeframe and logistics, but we at Metro Construction pledge to do our part to ensure that this project is successful along with all the other contractors,” he said. “So, guys, let’s get it on.”

In January, officials explained that their aim is to move faculty and senior students from the former Clarence Thomas Limited building in Pasea — where they had been accommodated since shortly after the hurricane — before eventually building a junior high school on both ends of Tortola to ease the pressure on the Road Town campus.

In November, officials said that government had allocated $7 million in the 2022 budget for works to be completed this year.

Blaming the funding gap on soaring inflation due to the lingering effects of the Covid-19 pandemic and the war in Ukraine, Mr. Fahie said the government has “several options” to secure the additional funding.

His top choice, he said, is the “Move with a Purpose Project,” which he described as a challenge to 70 VI businesses to make donations of at least $60,000 toward the school redevelopment project.

He said that donors will have the guarantee that monies donated will be accounted for, adding that each donor will also get a monthly progress report from the RDA on how the money is being spent.

Some donors have already stepped up, he said, adding, “So don’t tell me it can’t happen.”

On Monday, however, Opposition Leader Marlon Penn argued on the National Democratic Party radio programme that he feared the project would be left in the lurch if the pledges don’t materialise before the five-month timeline is up, leading the government to turn to other sources.

Anthony McMaster, who Cabinet confirmed last month as CEO of the RDA, said the plans for the new buildings were hatched in August 2021, when Deputy Premier Dr. Natalio “Sowande” Wheatley described “a grave situation” in the school buildings.

“He said, ‘The RDA has poised itself to be an agency that is making a difference. Well, I need a difference. I need a solution. Because I need to get my teachers and my students out of that environment,’” Mr. McMaster recalled.

The RDA initially provided seven different options to the minister before he was satisfied with one, Mr. McMaster said, adding that these proposals included plans to construct a new school to the tune of $40 million.

However, that and some of the other designs would have caused further delays, and Dr. Wheatley deemed them not suitable, he said. After settling on the final plan in December, the RDA hired Trojan Design Consultants to draw up plans, Mr. McMaster said.

“By December we engaged the services of SunWise Limited and — again, performing miracles because the projected time for the demolition and removal of all the slabs that lay here after the hurricane was supposed to be four weeks — within 14 days, all of those slabs were removed,” he said.

By February, he said, the RDA had its drawings fully approved by the Town and Country Planning Department and the Building Authority. The agency’s director of procurement then solicited expressions of interest from qualified contractors, which resulted in a shortlist, Mr. McMaster said.

“And in February, we issued the request for proposals to those contractors,” he said. “Those proposals were received in March: We’re still in March, and an evaluation was done. And based on that evaluation, we are now here today.”

He said he expected work on the site to begin on Monday of this week.

Issues with the currentarrangements at the formerCTL building have been numerous, with teachers and students reporting poor air quality,noise from other commercialactivities, concerns about theimpact to surrounding businesses, and growing expensesto keep using the facility despite its problems.

The arrangement necessitated a shift system with reduced learning hours, and students were left unsupervised in the morning and afternoon due to the system.

On Friday, Dr. Wheatley saidhe wanted his legacy to includegetting students into the school after numerous delays.