With the territory’s seaports poised to re-open April 15, a promised 12,000-dose shipment of the AstraZeneca Covid-19 vaccine arrived from the United Kingdom on March 17. The number of people …

END_OF_DOCUMENT_TOKEN_TO_BE_REPLACED 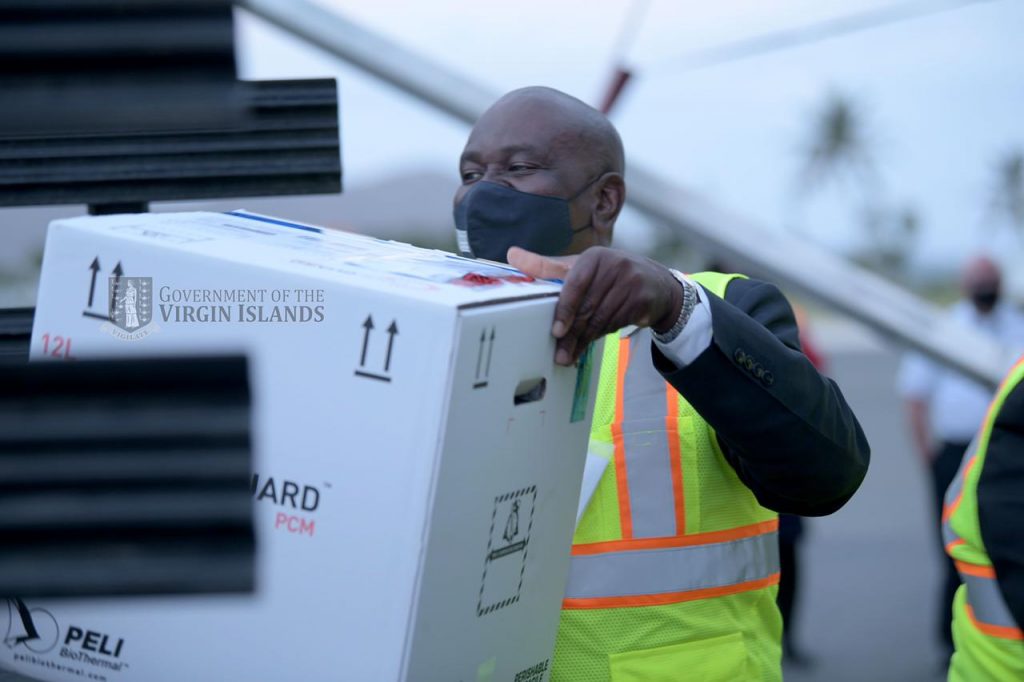 Health and Social Development Minister Carvin Malone lifted a box of 12,000 doses of AstraZeneca vaccine after its arrival on March 17. (Photo: GIS)

With the territory’s seaports poised to re-open April 15, a promised 12,000-dose shipment of the AstraZeneca Covid-19 vaccine arrived from the United Kingdom on March 17.

The number of people vaccinated in the Virgin Islands at the last released count the same day was just over 6,500, and vaccinations continue to be available to any adult resident.

The new shipment brings the total number of vaccines delivered here up to 22,000, enough to administer the required two doses to 11,000 people — about a third of the territory’s population.

Covid-19 vaccination centres are open Monday through Friday for walk-ins, and will accommodate health care workers, frontline workers, the elderly and people with chronic diseases and disabilities at 10 a.m. and all other residents after 11 a.m.

All residents are being urged to pre-register for the vaccine at ministryofhealth.gov.vg/vaccines, but they can also register on site. As of March 24 — when the most recent update was provided
— 6,929 people in the territory had been vaccinated, and health officials hope to see that number grow quickly, with another 12,000 doses tentatively scheduled to arrive on March 31.

If enough people get the vaccine, Mr. Malone has suggested that some safety protocols could be dropped as soon as Easter.

Government reported zero known active Covid-19 cases last week, and the private sector was scheduled to come on board through a memorandum of understanding requiring private health care providers to vaccinate with no costs to patients or the National Health Insurance.

The March 17 total leaves about 20 percent of the population covered, according to the minister. In order to ease entry protocols and get the tourism economy moving again, the minister added, 21,000 to 28,000 people must be vaccinated.

As vaccination rates continue to tick up worldwide, including in the United States and United Kingdom — and with announced plans to welcome vaccinated cruise ship tourists back by June — social media in the VI has been abuzz with the idea of lifting the
four-day quarantine requirements for vaccinated visitors.

So far, Belize is the only Caribbean country to have introduced a vaccine passport, which would exempt visitors from PCR testing before arrival.

The European Union is considering a passport that would allow intra-European travel by this summer.

Mr. Malone said this idea will be considered here too.

“There are some countries around the world that are already  requiring the vaccine passport, and that will then help to relax the quarantine in those areas, so we are looking at this,” he said on Friday.