Behind Crafts Alive Village on Sunday afternoon, four men knelt in a circle and chanted as they poured libations. It was one of many traditions the Afrikan Studies Klub performed …

END_OF_DOCUMENT_TOKEN_TO_BE_REPLACED 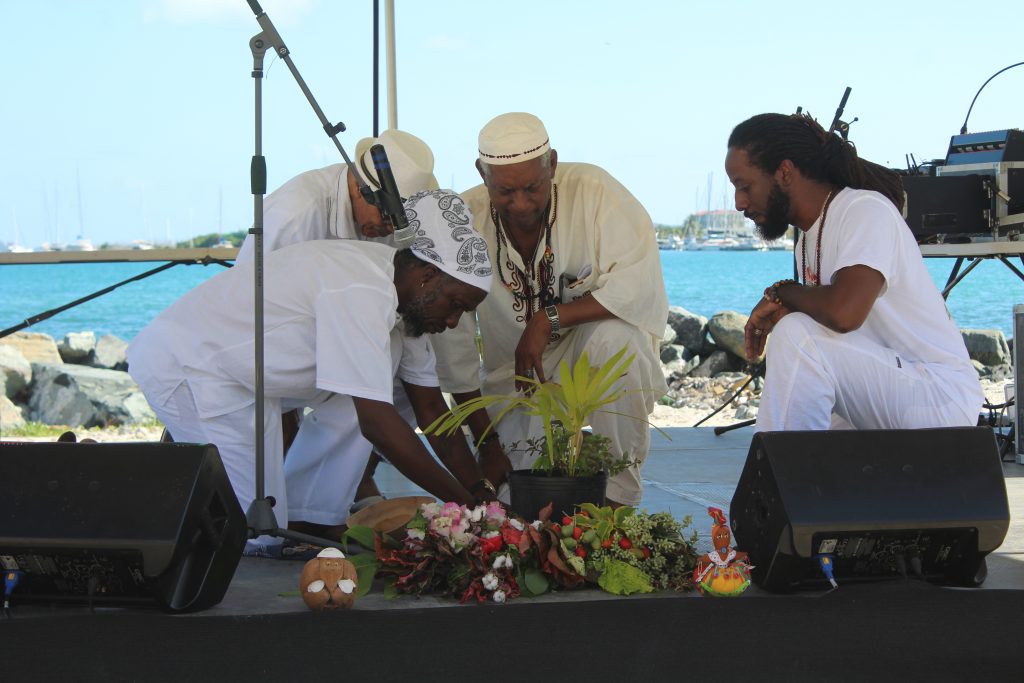 Behind Crafts Alive Village on Sunday afternoon, four men knelt in a circle and chanted as they poured libations. It was one of many traditions the Afrikan Studies Klub performed to honour the territory’s ancestors during the 12th Annual African Remembrance Wreath Laying Ceremony.

“I’m here to get us to come to terms with remembering our African roots, and our ancestors in particular,” said Art Christopher, the master of ceremonies. “In African tradition, whenever you have a significant event you always start with libations. … Historically we can’t pinpoint the actual starting date, but throughout African societies there’s always a tradition of pouring libations. … It’s basically saying, ‘I submit to you, God.’”

Libations translate to a tribute or liquid offering to a deity, and it was how the men began the ceremony.

The club hosts the ceremony each year at the start of February to commemorate Africans who died in the trans-Atlantic slave trade. Following in the footsteps of the United States-born Black History Month, February marks African History Month in the territory, a member of the congregation explained.

Gil Trott, a native of Bermuda who has lived in the Virgin Islands since 1973, began tossing wreaths into the sea 12 years ago, always at the beginning of February.

Throughout the years, others joined his gesture.

On Sunday about two dozen people joined the ceremony dressed mostly in all-white attire, and the event attracted attention from cruise-ship tourists as well. Hugs and greetings were exchanged as the attendees awaited the start of the programme.

“This year marks the 70th anniversary of self-government, which came about after the 1949 grand march,” Dr. Smith said. “The Department of Culture is partnering with the Virgin Islands Studies Institute at [H. Lavity Stoutt Community College] to carry out an educational campaign on notable historical figures who were so key to our political journey thus far.”

In addition to an exhibition, the campaign will include a publication and territory-wide competition between schools, she said.

Dr. Wheatley shared some remarks and a poem.

“The present is your classroom, the past your tutor,” he read. “Take the lessons that you need to shape the future.”

At the end of the ceremony, participants tossed wreaths made from fresh-cut local flowers and palm leaves into the water nearby.