Active Covid-19 cases in the Virgin Islands jump to 13

On Monday, government reported 13 known active cases of Covid-19, up from two on June 15, and contact tracing efforts got under way even as officials prepared to welcome the …

END_OF_DOCUMENT_TOKEN_TO_BE_REPLACED 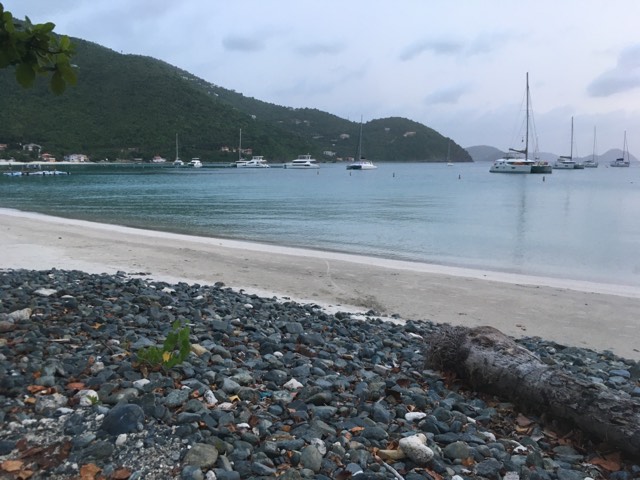 Known active cases of Covid-19 jumped to 13 on Monday, a few days after Premier Andrew Fahie announced a host of initiatives to entice tourists back to VI shores. Above, boats moored in Cane Garden Bay at dusk. (Photo: JOEY WALDINGER)

On Monday, government reported 13 known active cases of Covid-19, up from two on June 15, and contact tracing efforts got under way even as officials prepared to welcome the arrival today of the territory’s first cruise ship passengers since March 2020.

OneMart announced Monday that two store employees had tested positive for the virus, and the store asked all of its unvaccinated staff to stay home “until further notice.”

“We are pleased that 75 percent of our 140 workers are fully vaccinated and will continue to serve our customers,”OneMart’s press release stated, adding, “We lend our voice to encouraging all in the BVI to get vaccinated ASAP.”

As health workers embarked on another round of contact tracing, government issued a notice on Monday urging anyone who had visited one of three nightclubs on June 20 and a restaurant on June 18 to call the Covid-19 Hotline and isolate until they can arrange to be tested (see sidebar). Government also announced this week that the Magistrates’ Court closed indefinitely and the High Court Registry restricted operating hours after employees tested positive for the virus.

Meanwhile, however, officials’ pleas for residents to take advantage of the territory’s robust vaccination programme are likely to fall short of government’s goals.

The Virgin Islands has enough AstraZeneca vaccines to fully inoculate at least 17,000 residents, but so far only 12,681 first doses have been administered, and only 8,918 people have been fully vaccinated, Health and Social Development Minister Carvin Malone announced in a Tuesday Facebook broadcast.

In response to waning demand amongst the public, and in the face of a July 31 expiration date for the remaining vaccine doses, government has shortened the recommended wait time between doses from eight weeks to four, and has urged residents to get their first dose by July 3 so that they have enough time to receive their second.

Once this batch of doses expires, securing another will be difficult, health officials have said.

Though Premier Andrew Fahie said during a Friday press conference that the VI will secure additional doses, he added, “We do not know when.”

Even when the government does secure another batch, it is unclear if it will be offered to residents for free, Mr. Fahie said.

“We must get vaccinated as our best tool to reduce transmission, prevent severe illness, and prevent hospitalisation caused by Covid-19,” Mr. Malone said.

According to a Monday Covid-19 Dashboard update, the 13 cases are all located on Tortola, while eight are symptomatic and five are mildly symptomatic.

After a cruise ship cancelled its visit last month, following news that two passengers tested positive on an earlier voyage, Mr. Malone announced on Tuesday that the Celebrity Millennium is again slated to dock in VI waters today.

The minister said all crewmembers and passengers over the age of 16 will be fully vaccinated, and “testing, pre-screening, and embarkation are in place, along with other … onboard mitigation measures to ensure the health of the safety of the community.”

While passengers will be required to follow all of the VI’s health protocols and physically distance while disembarking and boarding the ship, they will be allowed to roam freely around the territory, Mr. Malone said.

He didn’t provide further details or mention the “cruise ship bubble” that officials previously said might be implemented.

The increase in cases was announced three days after Mr. Fahie on Friday announced a host of marketing initiatives to boost tourism to the territory in the coming months.

As a nod to the difficulty of the pandemic year and to the excitement many feel about much of the world reopening, the BVI Tourist Board is coordinating all of its advertising efforts under the theme of “Something to Celebrate,” Mr. Fahie said.

Already the BVITB has launched Father’s Day and Mother’s Day promotions aimed at encouraging patronisation of local activities and restaurants, while June marks the beginning of the “Staycation” promotion, which advertises getaways in this territory as well as neighbouring jurisdictions, Mr. Fahie said.

So far, 40 businesses have participated in the Staycation scheme, he added.

Mr. Fahie also announced that the BVI Food Fete will return this year along with its marquee event, the Anegada Lobster Fest slated for November.

“We are exploring the feasibility of hosting a summer music fest or sailing event in 2022 to further boost the tourism product, but these ideas are in the early stages and as the details are being fleshed out to ensure our safety, we will keep you informed,” Mr. Fahie said.

The BVITB is also looking to influences beyond the Caribbean to advertise the territory’s reopening.

Enlisting the help of Sarah Greaves-Gabbadon, also known as “JetSet Sarah,” a Miami-based freelance travel writer who was once the editor of Caribbean Travel + Life, and Coco Rocha, a Canadian fashion model with her own talent management company and 1.6 million Instagram followers, the board hopes to spread word of the VI as a safe vacation destination far and wide, according to the premier.

Work is also ongoing on “picture-taking signage” on the four main islands, Mr. Fahie said. However, statistics that Mr. Fahie provided from the Tourist Board suggest that as the summer wears on, the number of visitors to the territory is expected to dwindle.

In June, the Tourist Board recorded 899 boat guests, who made a total of 157 bookings.

This month, the Tourist Board anticipates hosting 843 boat guests, who altogether made 148 bookings, and 1,196 guests who made 610 land based bookings.

For August, the Tourist Board so far expects to see only 220 guests, who made a total of 33 bookings to stay on the water.

On land, 596 guests made 368 bookings for that month, according to the Tourist Board.

Asked Friday whether government has a definitive plan for when it might lift all restrictions, Mr. Fahie said that the pandemic is a fluid situation and plans may change from day to day and minute to minute.

“There’s no one in this world … that has any plan that is still valid that they had from the beginning of Covid,” he said.

Although Mr. Fahie said the government has mapped out some different scenarios, he declined to share details.

“Even medical doctors, they always have different scenarios [for] if this happens or if during the operation that happens, or whatever the case may be, but they only tell the patients the good side because they hopefully never have to use anything that looks on the bad side,” Mr. Fahie said. “So that’s why you don’t say those things.”

While government has previously announced that vaccinated travellers will be able to skip quarantine and take a negative PCR or rapid antigen test five days after arrival, Mr. Fahie on Friday did not say which rapid tests, if any, had yet been approved by government.

Though staff at the Dr. Orlando Smith Hospital have been considering using such a test, Mr. Fahie said that it was too early to announce any details.