Local News > 14 battle it out in CPAC Poetry Slam

14 battle it out in CPAC Poetry Slam

Coconut Lounge was packed on Saturday evening, but when poets took the microphone in their hands, the whole room fell silent. “So check yourself, respect yourself and let yourself be …

END_OF_DOCUMENT_TOKEN_TO_BE_REPLACED 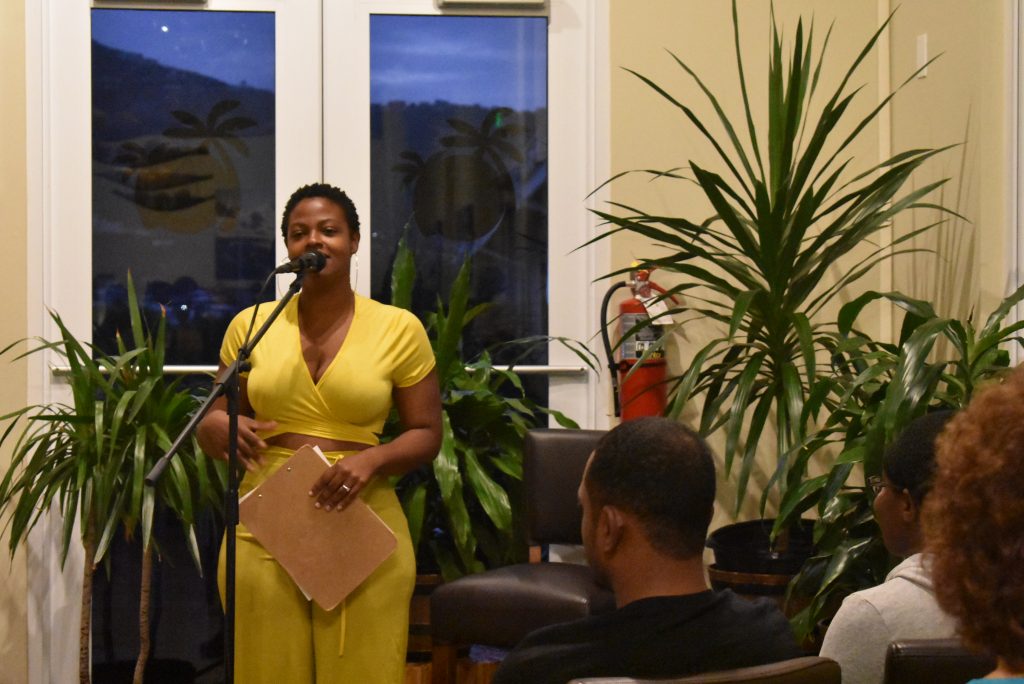 April Glasgow, president of Callaloo poets and Artists Collective (CpAC), introducescontestants during a poetry slam on Saturday night in the Coconut Lounge.

Coconut Lounge was packed on Saturday evening, but when poets took the microphone in their hands, the whole room fell silent.

“So check yourself, respect yourself and let yourself be known as nothing less than a queen,” recited Christopher Varlack, a poet who took the stage after ten years and won the title of the slam champion. His poem “Admonition” was dedicated to his daughter.

A panel of judges decided between his and 13 other contestants’ poems during an annual Poetry Slam hosted by Callaloo Poets and Artists Collective. The event was organised in celebration of World Poetry Day on March 21 and it followed up a video project that highlighted students recalling their Hurricane Irma experiences.

“Callaloo Poets have been around for a number of years and they’ve been known to put together some of the most creative events to just provide a platform for creative expression in the BVI,” said Jovan Wilson from 284 Media, an organiser of the event. “We just celebrated World Poetry Day on March 21 and we just saw it fitting to do an event to commemorate it.”

Within ten days, the organisers and various sponsors pulled the event together.

Mr. Varlack took home $500 as the first-place winner. Runner-up Shereen King took $200 for her performance, and in third place was Daiikiru Akasha Maximillion.

Kicking off the night with a poem that won her the title in the previous slam was At-Large Representative Sharie De Castro, the junior minister of trade and economic development. She set the stage for the contest not as a contestant but as a lover of poetry, reciting a poem that called on her experience as both a student and a teacher.

“When you walk on the streets you make accidents occur, vehicles swerve while observing your curves,” he recited.“You got me on a high like I’m burning the herb,and — oh my — you fly: You must’ve learned from the birds.”

Other poets dove into topics ranging from sexual harassment and politics to love lessons and female strength. In her poetry, Ms. King described experiencing sexual harrassment at the age of 13.

“You see, as I left the school walls the cat calls began again,” she recited.

The night wound down with a tap dancing performance and small contest before the winners were announced. Three audience members each won a collection of contemporary poems from the VI if they answered a question right or were brave enough to share some lines of poetry in front of the crowd.

Each contestant in the poetry slam earned up to ten points across five categories. Judges decided upon how well-crafted each poem was and how it demonstrated effective use of language; how it effectively conveyed an idea and perspective; how creative and original it was; how engaging it was; and if the poet’s facial gestures and movements fit with the poem.

Every third Saturday of the month, the Callalloo Poets meet at Mellow Moods cafe for poetry readings. The next session is on April 20.

“I just want to encourage people to continue to put pen to paper,” Ms. Wilson said after the event. “I think a lot of people don’t have written outlets, and a lot of people are angry. Whatever your frustrations are, it’s just a great platform to express yourself.”