Governor John Rankin first visited the Virgin Islands not on vacation, but to lend his support as leader of a fellow overseas territory in the aftermath of Hurricane Irma in …

END_OF_DOCUMENT_TOKEN_TO_BE_REPLACED 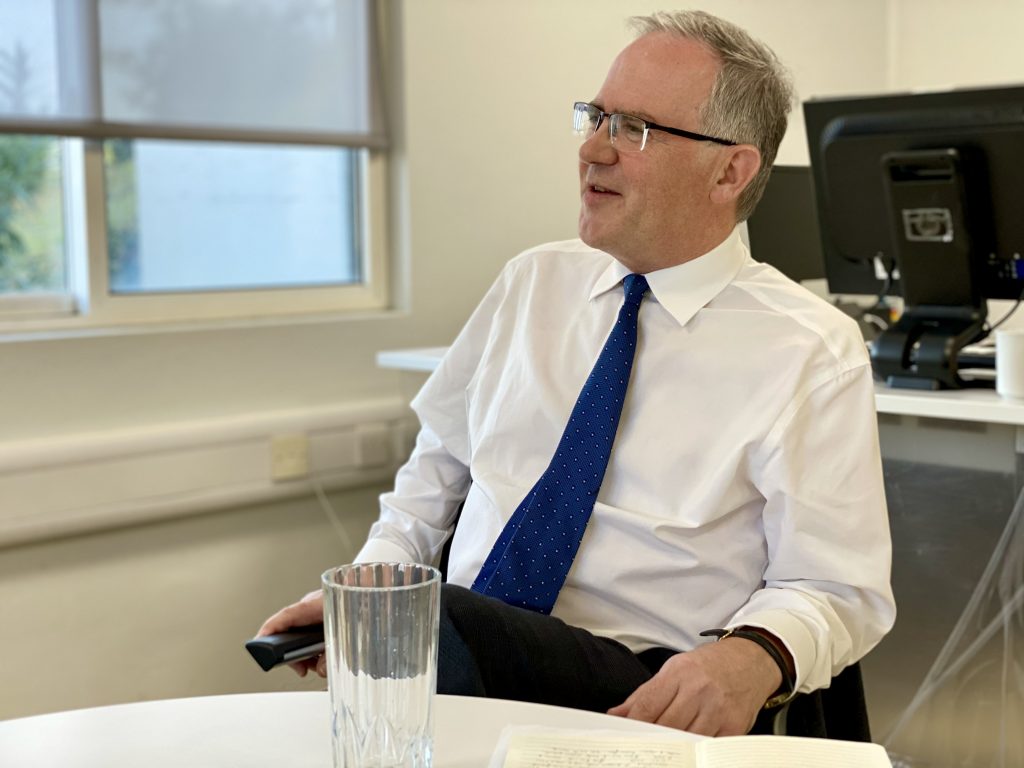 Governor John Rankin, who was sworn in as the 14th governor of the Virgin Islands on Friday, shared his insights into the United Kingdom’s corruption inquiry, the VI’s rollout of the Covid-19 vaccine, disaster preparedness and more during a Tuesday interview with the Beacon. (File photo: DANA KAMPA)

Governor John Rankin first visited the Virgin Islands not on vacation, but to lend his support as leader of a fellow overseas territory in the aftermath of Hurricane Irma in 2017. More than three years later, he has returned to take up the role of governor as the VI faces a slew of new challenges.

Mr. Rankin, who previously served as Bermuda’s governor since 2016, concluded his quarantine last Thursday evening and swore the oath of office the following day in the House of Assembly.

Though the quarantine kept him from visiting as much of the territory as he would have liked, on Tuesday he told the Beacon he had no qualms about spending his first two weeks in isolation given how hard the VI has worked to slow the spread of the virus.

“The island has so far done well in reducing the impact of the Covid-19 pandemic, and quarantine has been part of the arrangement,” he said. “The community here as well has behaved responsibly and helped to prevent community spread.”

One of the first places he plans to visit as governor is Dr. Orlando Smith Hospital, where he will voice his support for workers who have continued to serve the community during difficult times, he said.

Mr. Rankin added that he applied for the position of governor because he felt he had relevant experience to bring to the job in a “beautiful place with talented people.”

“There are plenty of challenges ahead, but I’m very committed to do my best,” he said.

As with many historic events this year, the Covid-19 pandemic slightly changed the programme for Mr. Rankin’s swearing in as the 14th governor of the VI.

The semi-virtual event was broadcast Friday from the House of Assembly’s temporary headquarters in Duffs Bottom, beginning with a socially distanced outdoor salute from the Royal Virgin Islands Police Force.

From there, Mr. Rankin walked into a red-cloaked room to greet government ministers and take his oath of office.

Mr. Rankin said during the ceremony that although he previously served as governor in Bermuda, he is “keenly aware no two territories are the same.” He will therefore be in “listening mode” while getting to know the VI, he explained.

He noted that visiting the territory in the immediate aftermath of Hurricane Irma made him aware of the VI’s fortitude.

“That experience taught me of the great strength, compassion and integrity which the people of these islands possess,” he said. “Returning three years later and seeing how far things have come, I can tell that determination and resilience are also strong traits in these islands. … I will do my best to help this territory keep moving forward.”

He listed three areas of focus from his first day: rule of law, public service leadership, and good governance. He also lent his full support to the commission of inquiry announced last month by his predecessor, Gus Jaspert.

“I hope that the people of the BVI feel empowered to engage in the commission so that it delivers for the people,” he said. “I see it as a vital opportunity for these islands to carve a clear path toward good governance and greater self-determination.”

As the new governor, Mr. Rankin will be the one to receive Sir Gary Hickinbottom’s inquiry report in six months.

“I hope that his recommendations address the issues which have been raised before him, and … will assist in guiding me as governor in the best way forward,” he told the Beacon on Tuesday.

Mr. Rankin added that the territory needs to see the investigation through to the end, and should ultimately gain a stronger economy and worldwide reputation from the process.

“One hopes he can conclude his work within six months,” he said. “If an extension is required, then we’ll take his view on that.”

Regarding the territory’s recent record-setting cocaine bust at the end of last year, Mr. Rankin pledged to do everything in his power to support the incoming police commissioner.

The governor also plans to engage with all areas of the public service, particularly in strengthening disaster management. Mr. Rankin added that he is prepared to “go to bat” for the territory on the international stage as well, particularly as the VI faces renewed threats of being blacklisted by the European Union.

And on issues that require engaging with other UK representatives, like the territory’s ongoing constitutional review, Mr. Rankin said he looks forward to liaising between them and elected officials in the VI.

“I will always want to work in a constructive fashion with the elected government and support them in carrying out various policies,” he said. “Inevitably, there may be occasions on which we will disagree. The important thing is that we are tackling disagreements in a professional and respectful manner. I am committed to doing that and will do my utmost to maintain that effective relationship.”

Mr. Rankin also said Tuesday that the VI’s approach to managing the pandemic has been comparable to Bermuda’s.

That territory, which has a population double the size of the VI’s, has seen 691 confirmed cases of Covid-19 and 12 deaths, but it currently is reporting zero new cases, according to the World Health Organization.

Like the VI, Bermuda relies heavily on tourism and financial services as pillars supporting its economy, and families there have also struggled with the effects of shutting down travel, he said.

“The UK is committed to supporting the BVI and its fellow overseas territories,” he added. “I’m very glad to say that the first supply of vaccines to the BVI coming from the UK will be [today].”

The 8,000 doses of the AstraZeneca vaccine will be distributed on a volunteer basis, and he said approximately 70 percent of the population will need to receive the vaccine in order for the territory to return to some degree of normal operations, particularly in the tourism industry.

The sooner the vaccines can effectively be rolled out, he added, the sooner the community can start to relieve the toll on students and others who have struggled with the isolation of the past year.

During the Friday ceremony, Speaker of the House Julian Willock offered a candid welcome to the new governor, noting that he comes at “a time when the relationship between governors who represent the United Kingdom has been tested, particularly within the last four years.”

“You came at a time when there are discussions, debates, blogs, articles and coffee talk — in some districts it is called ‘rum shop melee’ — about the future of the territory and a path forward,” said Mr. Willock, who owns the website Virgin Islands News Online.

The speaker said he welcomes the governor “not with a clenched fist, but with open arms,” while giving a few friendly jabs at Bermuda.

He added that he hopes the swearing in marks a turning point for improving the relationship between the VI and UK officials.

“We expect you, governor designee, to play your role in improving the relationship where there has been mistrust,” Mr. Willock said. “Today, we will celebrate a renewed commitment to the rule of law, due process and good governance, not only in theory but in practice.”

Opposition Leader Marlon Penn also offered his welcome and gave the governor his thoughts on “who we are as a people.”

He extolled the VI’s love for country, neighbour, honesty and integrity.

“The role of the governor is one of great significance to us as a democratic territory,” Mr. Penn said, noting the position’s responsibility in providing oversight and protection of good governance. “It is my hope that my fellow elected members will reciprocate the respect and honesty we expect from the office of the governor.”

While discussing the inquiry and pandemic, Mr. Penn said being appointed at this point in the territory’s history could be “daunting.”

“However, let’s not be deterred from continuing the people’s work,” he said. “Our shared responsibility to ensure good governance and the continued safety of these Virgin Islands shall persevere above all.”

Premier Andrew Fahie said the new governor has the “uttermost support” from government in carrying out his duties, including those associated with the inquiry.

“We welcome a transparent commission of inquiry because we are 100 percent certain that when it is completed in a transparent way … the British Virgin Islands will be able to move from its teenager years into its adulthood,” Mr. Fahie said.