“We got a fish on the line!” shouted Chad Lettsome to the two crewmembers and four charter guests aboard the Salt Shaker. One of the guests scrambled to get into …

END_OF_DOCUMENT_TOKEN_TO_BE_REPLACED 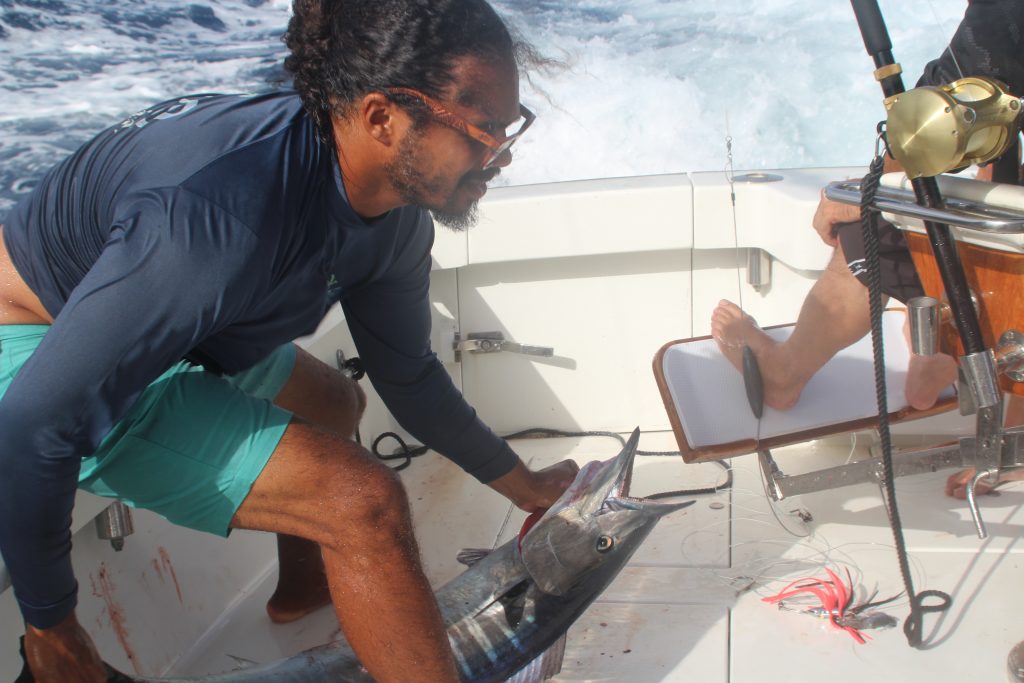 Chad Lettsome grabs a wahoo from the water on Saturday during the Wahoo Mania Fishing Tournament, which was based in Virgin Gorda. (Photo: ZARRIN TASNIM AHMED)

“We got a fish on the line!” shouted Chad Lettsome to the two crewmembers and four charter guests aboard the Salt Shaker.

One of the guests scrambled to get into the “fighting seat,” grabbing the rod and reeling in a 32-pound wahoo.

The boat was one of 16 to enter the Wahoo Mania Fishing Tournament hosted Saturday by the Virgin Gorda Fishermen’s Cooperative.

The tournament was a fundraiser for the VGFC’s summer youth programme, which is held on the sister island every year.

Brothers Jaden, Braden, Kael and Zaed Chalwell placed first in the tournament with a 71.5-pound wahoo, winning a $3,000 grand prize aboard Megabite.

Salt Shaker took second with the 32-pounder, and Under Dog won heaviest overall catch. Each registered boat contributed $500 toward the fundraiser.

Many of the winners of the fishing tournament were graduates from the VGFC’s summer youth programme, including Mr. Lettsome’s nephew William Bridgewater, according to event organiser Thomas Warner.

Mr. Lettsome said that he comes from a multi-generational family of fishers, and that he grew up alongside the Chalwell brothers in Red Bay, East End.

This year marks the first time Wahoo Mania has been held since 2017.

“Having a good time and supporting a good cause is not something you can do every week,” Mr. Warner said. “It gives us real joy to be able to do something for and with the community like that.”

At 4 a.m., Mr. Lettsome and Jeremiah Smith boarded the Salt Shaker and took off from East End toward Virgin Gorda, where they picked up Mr. Bridgewater and four charter boat guests. The dock in Virgin Gorda filled up with boats preparing for the day. Just before the break of dawn, they headed into the open waters.

Facing a squall, Salt Shaker headed about 15 miles off the shore of Virgin Gorda to fish at the seamount, a place where plenty of game fish often can be found.

Armed with four large fish-ing rods at the back of the vessel, the crew quickly set out bait and let the fish come to them. After an hour, they got a hit.

It was a wahoo, and they were in the running for placing in the tournament. Within that same hour, the crew caught a tuna and a mahi mahi.

The rest of the day was quiet, with just one more catch.

“It was a very rough and tough day: A lot of people were feeling very nauseous on the boat. The bite was slow, but that really separates the sheep from wolves,” Mr. Lettsome said. “To be honest, it wasn’t a good fishing day or a good catching day: It was just a good tournament day where everyone came together, toughed it out and fished. It was a good competition.”

All boats had to return to Virgin Gorda by 5 p.m. on the dot or they would be disqualified. As boats pulled in, the catch was carried away in a wheelbarrow and weighed immediately.

A tent stocked with food and drinks awaited the contestants, and speeches were delivered by government ministers.

Junior Minister for Trade and Economic Development Shereen Flax-Charles, who is a founding member of the VGFC, applauded the young men who participated in the tournament and encouraged more young people to fish.

She added that up to 280 children annually have participated in the summer youth training programme in recent years.

“I’m so pleased to see that they’ve brought the fishing tournament back to where it belongs,” said Natural Resources, Labour and Immigration Minister Vincent Wheatley.

The VGFC hopes to host more fishing tournaments this year, and Mr. Warner said an announcement will be made soon.