It was a night of pirouettes, croisés and pliés during the annual BVI DanceFest on Sunday at the H. Lavity Stoutt Community College, where young dancers took the stage at …

END_OF_DOCUMENT_TOKEN_TO_BE_REPLACED 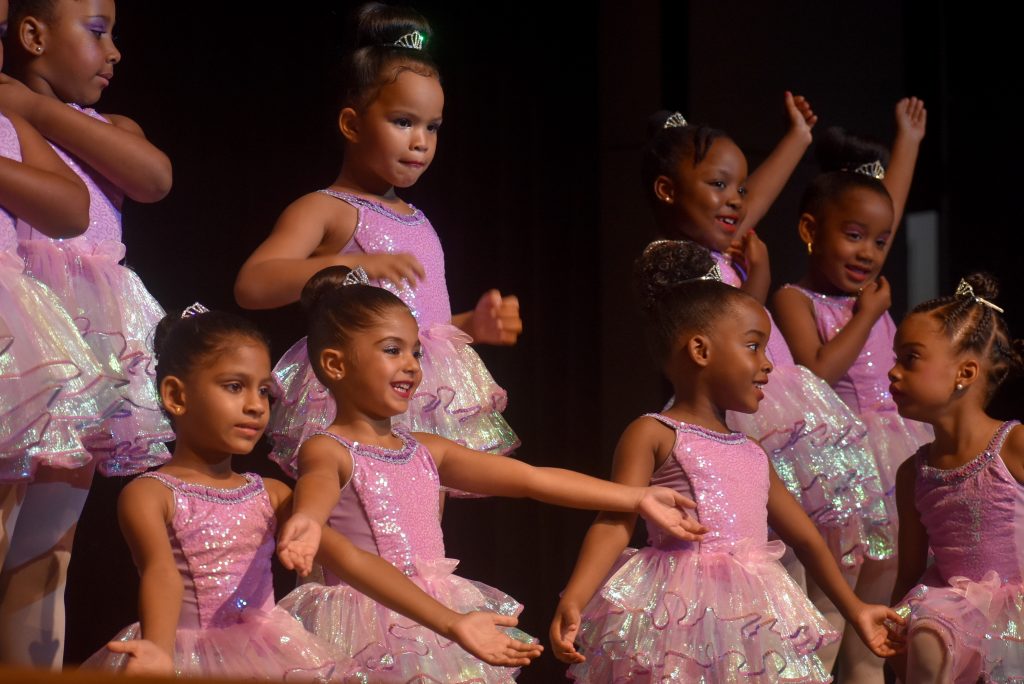 It was a night of pirouettes, croisés and pliés during the annual BVI DanceFest on Sunday at the H. Lavity Stoutt Community College, where young dancers took the stage at the Eileene L. Parsons Auditorium to showcase what they’ve learned over the past year.

“These dancers will perform en pointe after the waltz, then the Dying Swan will finish with a fast-paced finale of pirouettes,” said emcee and BVI Dance School alumna Alecia Penn before the sixth act of the night.

Then six dancers took the stage dressed in black feathered costumes to perform four parts of a swan saga.

Sunday’s three-hour show was the second of the weekend, following another performance on Saturday night. Both nights consisted of 26 dances in several styles spread across two acts.

BVI Dance School Director Sandy Lyons said more than 820 tickets were sold over the weekend, with both evenings selling out. At least 160 dancers performed each night, she added.

“Once again, we were thrilled with the outcome,” Ms. Lyons said.“We feel the kids are getting better and better through their determination and perseverance.”

The BVI Dance School’s showcase usually takes place in June when the children wrap up their school term and the dance term.

Some of the dancers — like the “Tots 1” class — took the stage for the first time, often looking to the side of the stage where their instructor helped them with the moves. The little dancers leapt and ran across the stage, helping each other stay on count and in position throughout their performances.

Dancers from grade four opened the night with a dance to the song “We Don’t Talk About Bruno” from the Disney movie Encanto.

Dashes of culture were served during the intermediate ballet group’s performance of “Hungarian Czardas” and the grade three ballet group’s dance to “The Reel,” an Irish folk song.

The grade five ballet class danced to the song “A Beautiful Noise,” demonstrating the “power of speaking up to make the world a better place,” Ms. Penn said.

Aerial dancers took the stage at the beginning of the second act, when three sets of three dancers performed aerial moves with silks.

The proceeds from tickets and raffles held during the shows will go toward the BVI Children’s DanceFest Committee, Ms. Lyons said. That money is used to fund scholarships for dancers who are unable to pay for classes; to fund workshops; and to pay for the venue at HLSCC, according to the director.

“We miss our old cultural centre because we used to be able to do this show in one night and have 1,200 people there,” Ms. Lyons said of the Sir Rupert Briercliffe Hall, which has stood unused since being badly damaged in Hurricane Irma.

The school has counted its dance fests since 2000, the year the organising committee was established, even though it held similar events prior to that, according to Ms. Lyons.

There are at least four dance schools across Tortola. At first, she said, all the schools were invited to take part in the DanceFest, but now most of them host their own showcases separately.

The BVI Dance School resumes classes in September, but spectators might catch some of the dancers in a festival troupe led by Ms. Charles in August.