Seventeen police recruits were officially sworn in by Police Commissioner Michael Matthews on Dec. 14 to fill vacancies in the force. Virgin Islanders make up almost half of the cohort, …

END_OF_DOCUMENT_TOKEN_TO_BE_REPLACED 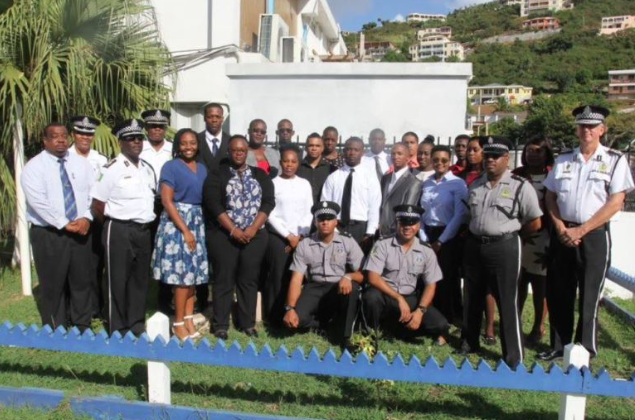 Seventeen police recruits were officially sworn in by Police Commissioner Michael Matthews on Dec. 14 to fill vacancies in the force.

Virgin Islanders make up almost half of the cohort, and the eight females mean that women outnumber men for the first time in a group of recruits.

Other notable recruits include the first officer to join the force directly from high school and the youngest to be locally trained, according to a police press release.

Mr. Matthews congratulated the recruits last week for making it through the qualification process.

“Our standards are high; you are here because you met them,” he said. “The qualification process is not easy, but we wanted the best. Therefore, we congratulate you. You will need to dig deep and be resourceful in order to progress successfully through the next six months, but I speak from personal experience when I say it is worth it.”

The group will undergo a week of orientation before embarking on a six-month training programme that starts on Jan. 3.

The training will include “early morning physical exercise, a full day of instruction and late-night studies in preparation for assignments the following day,” the press release stated.

The recruits will occupy the barracks in the Road Town Police Station during the programme, while lectures will be conducted at the Marine Centre at the H. Lavity Stoutt Community College.