For its 17th year, the Leverick Bay Poker Run is getting by with help from its friends —and thanking them in return. Javier Lopez of JL Marketing, who is helping …

END_OF_DOCUMENT_TOKEN_TO_BE_REPLACED 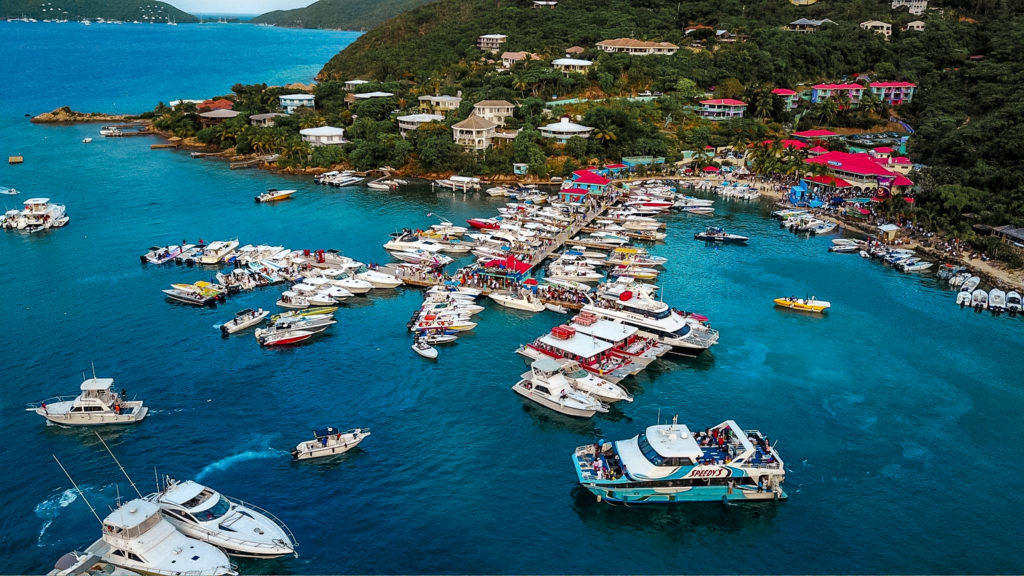 The territory recently topped a list of Caribbean destinations. Pictured is a scene from the 2017 Poker Run in Leverick Bay. (Photo: PROVIDED)

For its 17th year, the Leverick Bay Poker Run is getting by with help from its friends —and thanking them in return.

Javier Lopez of JL Marketing, who is helping promote the event, is one of those friends. He is part of the “Puerto Rican Navy,” the informal group of Puerto Rican boaters that mobilised to assist the VI after Hurricane Irma.

Now, as a thank you, Foxy’s Tamarind Bar in Jost Van Dyke, which serves as the second card stop on the run, is inviting them back for a celebratory barbecue on May 26, the night before the Poker Run.

“We wanted to bring these people together and show that the Caribbean is unified,” said Mr. Lopez, explaining that the event will “serve as a thank you to people for everyone who came along and helped.”

Around 300 boats and 2,000 participants are expected from as far away as Miami, Puerto Rico and St. Maarten. They will motor from stop to stop, picking up cards and competing for $15,000 in prizes, he said.

Besides Leverick Bay and JVD, the other stops this year are Scrub Island, Pirates Bight on Norman Island and the Tortola Pier Park.

On the day of the event, New Horizon Ferry will be running transportation from West End to JVD, where businesses in Great Harbour will be offering food, live music by Evolution Band, a waterslide provided by Splashzone BVI, and other activities.

“We thought it was going to be cancelled this year because we didn’t have infrastructure to host such an event,” Mr. Lopez said. “It wasn’t until the first week of March that I was finally able, after a trip to the BVI, to say, ‘Let’s do this.’”

In the end, he explained, the BVI Tourist Board and other government officials asked the owners of Leverick Bay to put on the run.

“They said, ‘We have to put on this event this year. We need to show the world that the BVI has pride — that we are strong, and we have to get tourists back,’” he said.

The Poker Run launched in 2002 with a handful of boats from Puerto Rico and the VI. Over the years, organisers have donated tens of thousands of dollars to charity, and this year the entry costs will go to the Virgin Gorda Charitable Trust.

Also joining the event this year are members of the Florida Power Boating Club, one of the world’s largest private power boating clubs.

“They are the ones who actually started the poker run [concept] in Florida and all over the US,” Mr. Lopez explained. “A few years ago, they were able to go and check out the BVI Poker Run, and said, ‘This is by far the most fun and well-organised poker run that we have ever seen.’”

Now, in an effort of solidarity, the club is bringing some 40 boats down from Miami, sponsoring and renting out catamarans, and flying some members in on private jets. “There’s an incredible push in Miami to help the BVI recover faster,” he said.

Local support
The event will also include a tribute to late ferry mogul Edwin “Speedy” George. “Speedy’s was a symbol of resilience, and they are going to invite the Speedy’s ferries to the Poker Run so that all the routes, people and locals to the BVI can enjoy seeing those boats,” Mr. Lopez said.

He concluded that, although international attendance is important, he thought the most inspiring thing about the event this year was the support from VI residents.

“They are putting boats together,” he said. “Even if they don’t have enough money for three boats, they’re getting parts and tools to fix up one.

“People are saying, ‘I’m going to go to the marina and fix my boat, and I will support you and congratulate BVI that in seven months you have risen up from the ashes and you are beautiful.’”