The Virgin Islands is about 115 miles away from Puerto Rico, and for Troy Pereira the trip was well worth it. It was his first time participating in the Leverick …

END_OF_DOCUMENT_TOKEN_TO_BE_REPLACED 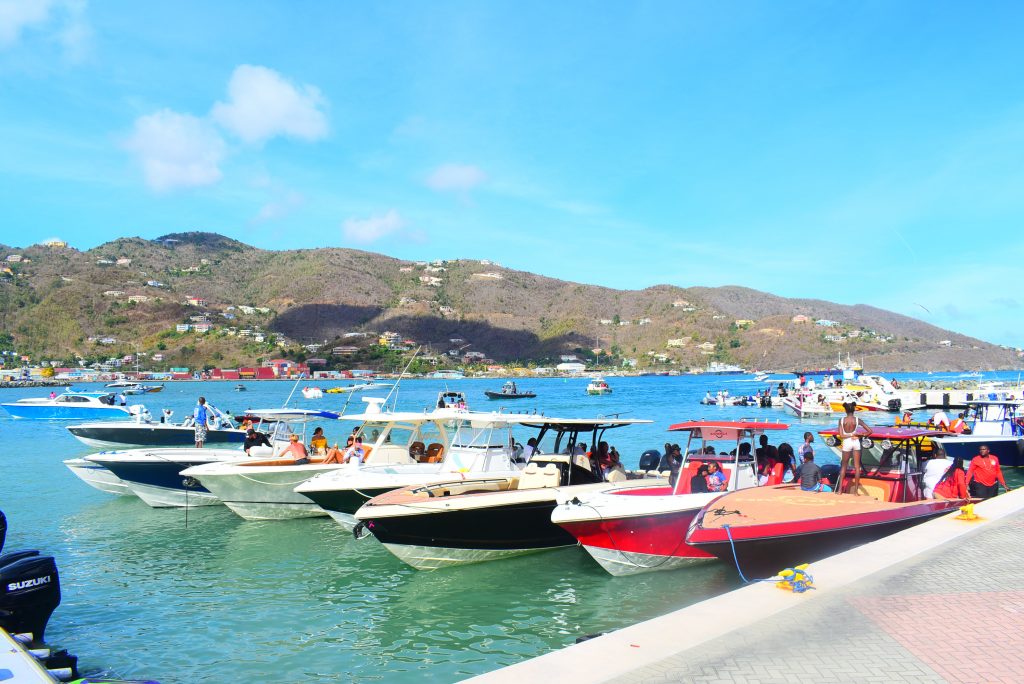 The Virgin Islands is about 115 miles away from Puerto Rico, and for Troy Pereira the trip was well worth it.

It was his first time participating in the Leverick Bay Poker Run, which marked its 18th anniversary on Sunday.

Mr. Pereira said he’s never been to an event quite like it before. And for someone who goes fishing on his boat almost every day and regularly attends races, that’s saying a lot.

“I find it very interesting, going to the different islands,” he said.

Mr. Pereira decided to tag along in his friend’s boat, The Diva, all the way from Puerto Rico. At the next-to-last stop in the Cyril B. Romney Tortola Pier Park, he said their hand — a series of cards they picked up at stops along the way — was looking so-so.

The point of the inter-is-land run is to win the best poker hand, and ultimately the top prizes, which include over $16,000 split among the top three boats. This year’s first place winner was West Marine Charters.

Organisers did not disclose the total amount raised as of press time, but said that at least $25,000 of the funds were earmarked for the Virgin Gorda Charitable Trust. The VGCT will process the money and explain where the funds are to be distributed over the next few days, they added.

The run began and ended in Leverick Bay, with stops in Foxy’s Taboo, Foxy’s Bar, Pirate’s Bight, and the pier park.

The event was founded in 2001 by Nick and Monica Willis, former managers of the Leverick Bay Hotel and Marina. Their goals included building a sense of community and giving people a chance to explore places they hadn’t visited before.

The first year they hosted the Poker Run, 12 boats showed up. The event has grown since, with a record-bxdcreaking 239 hands sold this year.

“We thought Irma would affect it negatively, but it became a beacon of strength,” said Joel Brillert. “People said, ‘We still want to relax together, have a good time together, and enjoy each other’s company.’”

Mr. Brillert and Rebecca Yates organised the event this year as the new managers of Leverick Bay Hotel and Marina.

With growing attendance from countries including Canada, Poland, Germany and Spain, Mr. Brillert was happiest to see people who attended before Irma return from places like the Turks and Caicos Islands and St. Maarten.

This year, the event saw an increase in spectators, who outnumbered boaters, he said.

“The sense of community was much stronger,” Mr. Brillert added. “That was the vibe this year.”

He estimated that 2,000 boaters registered for the run, and that 5,000 spectators came by car, plane, ferry or party boat to the various stops. These numbers, he said, were “unusual.”

For years, the event was mostly limited to the boating community. But with extra effort to provide housing, transportation and as much other accommodation as possible this year, thousands were able to enjoy the event from solid ground or from one of the spectator ferries, according to the organiser.

In the past, there has been a shotgun start where all the boats took off at the same time. But this year organisers decided to encourage a more “relaxed Caribbean-style start” by staggering it, he said.

Boats took off in groups rather than all at once, and they often stuck together. Boaters then took their time at each stop and left when they were ready.

“If anything it promoted more of that sense of community,” Mr. Brillert said, explaining that the staggered start helped eliminate any sense of competition and gave boaters more of a chance to hang out together.

The decision was influenced heavily by Virgin Islands Search and Rescue, he said, adding that the event was never intended to be a race.