Partway through an evening of storytelling, poetry and music on Nov. 21, event organisers called everyone’s attention to the clock at 5:30, the exact moment when about 1,500 people arrived …

END_OF_DOCUMENT_TOKEN_TO_BE_REPLACED 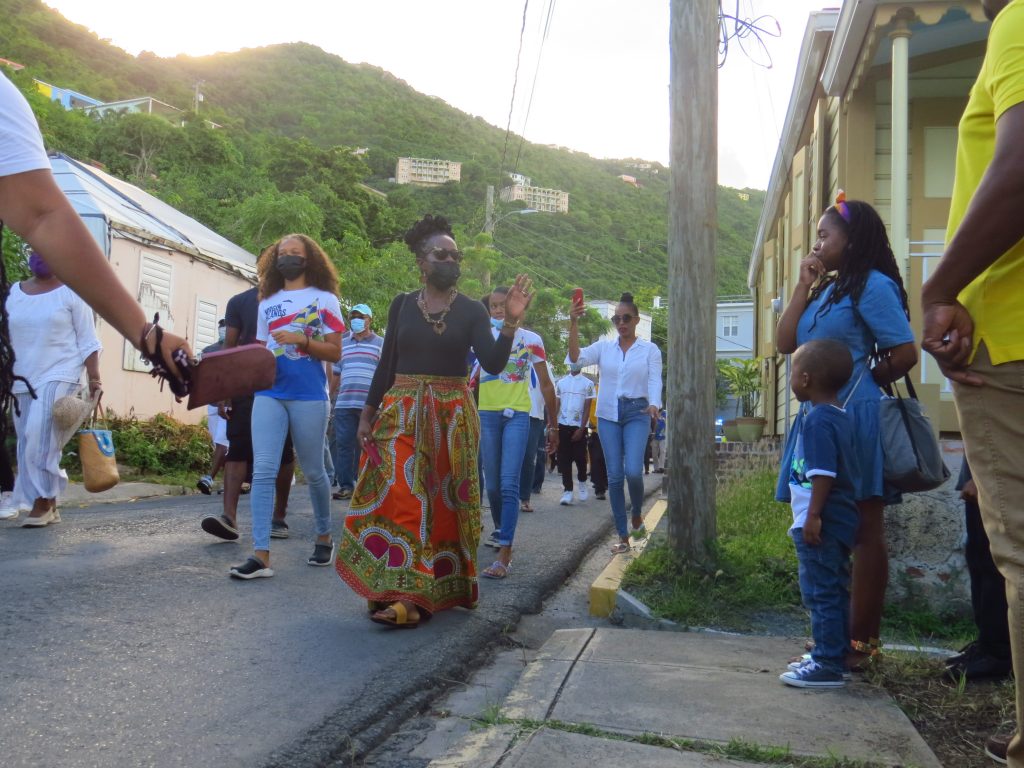 Residents filled Main Street on Nov. 21 as they walked the same path that about 1,500 protesters walked 72 years ago. The 1949 march led to the restoration of the Virgin Islands Legislative Council. (Photo: DANA KAMPA)

Partway through an evening of storytelling, poetry and music on Nov. 21, event organisers called everyone’s attention to the clock at 5:30, the exact moment when about 1,500 people arrived at Sir Olva Georges Plaza 72 years ago to demand change.

Many of the attendees had joined in a re-enactment of the famous 1949 march that was the impetus of restoring the Virgin Islands’ Legislative Council the following year.

The procession started at the Long Bush Band Stand and ended in Sir Olva Georges Plaza, led by people representing the leaders of the 1949 protest: Theodolph Faulkner, Isaac Glanville Fonseca, Carlton de Castro, and the women who assisted.

This is the first year the government declared The 1949 Great March and Restoration Day to be an official holiday, and community members took it upon themselves to organise a re-enactment and celebration of that historic moment.

“This event is significant to what we now know today as the Virgin Islands because it, of course, led to the re-enactment of the Legislative Council and successive constitutional developments through the years,” said VI Communal Association President Dr. Karl Dawson. “That became the basis for our economy and our community. It’s something that I believe really touches everyone who lives here now.”

Dr. Dawson said that as a history lover, he was glad to play a part in bringing that moment to life and to see younger generations taking part.

He added that he looks forward to seeing even more celebrations planned for the holiday in the future, including a dedicated symposium.

Many participants wore territorial clothing, and the leaders bore black sashes with white lettering identifying the first, second and third leaders as pictured in historical photos of the march.

The group sang as they wound down Main Street before ending at the plaza in the early evening.

One of the evening’s featured speakers was Hilda Abbott-Smith, who was 13 when she participated in the 1949 march.

As the crowd listened attentively, she recounted how the organisers would often meet to talk late into the night about what needed to change in the VI.

She said Messrs. Fonseca and de Castro were her neighbours, and her father would often chat with them about working conditions at the time.

Those late-night talks eventually led to civic action, the election of VI leaders, and greater autonomy for the territory.

“He only just had to say, ‘Come,’ because Tortola people was together,” she said. “When Faulkner asked them for help, everybody came to the rescue.”

Ms. Abbott-Smith noted that the territory’s history is often conveyed in bits and pieces, and she explained the importance of ensuring that stories are preserved and passed along through generations.

She added that she intends to write a book detailing her life in the VI and knowledge of such key moments.

The evening also included the talents of Ayana Hull, who shared her poem “This is Why We March,” and Jada Cameron, who co-wrote “I Wish I Was There!”

Mr. Callwood said he was initially nervous to be leading the large procession, but he was glad to help bring the march to life and pleased to see young people involved.

Janice Stoutt represented the women leaders of the past. She also recited a poem titled, “Remembering Our History and Shaping Our Destiny.”

Keynote speaker Bishop John Cline drew parallels between the 1949 march — where people of all walks of life worked together to support one another — and the civic engagement of today.

“They all worked together for a better and stronger BVI,” he said. “There was no allegiance to political parties, and the party fighting that now seeks to divide us. It was a bond of people: of proud people, of strong people, of intelligent people, of people with courage. That’s on whose shoulders we stand. We are here 72 years later.”

He also prompted listeners to consider a path to independence.

“If we choose [independence], then we must overcome the fears of the unknown future and move forward with courage,” he said. “We must move forward with not only talk, but action. We must wrestle with the changes and the challenges that will come as we mature into a politically healthy and trusted country.”

Deputy Premier Dr. Natalio “Sowande” Wheatley, who was serving as acting premier at the time, shared his remarks about “one of the most powerful and influential events in the history of the Virgin Islands.”

“These proud Virgin Islanders marched for our autonomy, for our ability to determine our own destiny, for the right to develop our education and health systems, to build our economy and infrastructure, and to chart a path towards a brighter future,” he said.

Dr. Wheatley also commended the historians who helped compile a book about the march that launched Nov. 24 and will be taught at secondary and tertiary schools in the territory.

“Let us teach our children about our proud history and legacy,” he said. “We stand on the shoulders of giants, and we are grateful to our ancestors for their sacrifice on our behalf.”