Local News > $1m to kick off work at admin complex

$1m to kick off work at admin complex

In 2017 hurricane winds permanently stuck pieces of paper to walls and doorframes, and piles of unusable chairs and desks remain on every floor in a wing of the Ralph …

END_OF_DOCUMENT_TOKEN_TO_BE_REPLACED 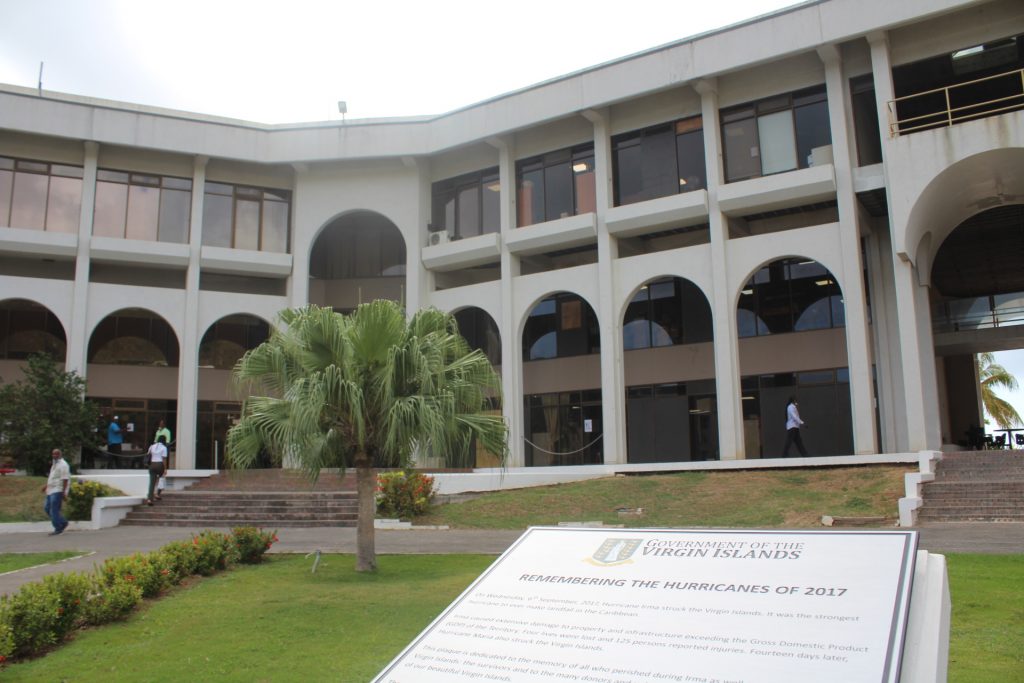 A $1 million contract for design and construction management for the reconstruction of the Ralph T. O’Neal Administration Complex was signed Friday. (Photo: ZARRIN TASNIM AHMED)

In 2017 hurricane winds permanently stuck pieces of paper to walls and doorframes, and piles of unusable chairs and desks remain on every floor in a wing of the Ralph T. O’Neal Administration Complex. Though the structure itself withstood Hurricane Irma, much of the building’s contents was swept away.

While government has cleaned and patched parts of the building since then and continues to house some offices there, a major renovation project is now getting started following the signing of a $1 million contract on Friday.

“The signing of this contract with OBM International Limited to provide architectural and engineering designs, construction supervision and construction management for the amount of $1,048,460.80 marks the official commencement of the renovation and repair works to the Ralph T. O’Neal Administration Complex,” Transportation, Works and Utilities Minister Kye Rymer said on Friday afternoon at the Recovery and Development Agency.

Marvin Flax of OBMI Limited stated that the complex will be a “more open and user-friendly facility” with a “state-of-the-art information system.”

He described his role as contractor being broken down into five tasks: consulting on the architectural design, designing a new information technologies system, designing new mechanical and plumbing designs, designing a new elevator in the west wing, and managing construction.

The contract signing was aired via Facebook livestream, and media was not invited.

“We anticipate the procurement of the glass windows and doors will take a few months and we anticipate that the actual work on site will commence with the passage of the hurricane season,” he explained.

Mr. Rymer said that his ministry has developed a “comprehensive work programme schedule” of repairs. Details including timelines and budgets were not disclosed during the contract signing.

Some of the projects he listed include purchasing a new generator, the demolition of temporary walls within offices, replacement of the existing elevator in the east wing, and a deep cleaning of the basement, including mould remediation.

Premier Andrew Fahie said that all public offices will have to temporarily move out of the building until the repairs are completed.

The contract was awarded early last year before the current government took office, but delays followed, according to Messrs. Fahie and Rymer.

“On [ Jan. 16, 2019], the Cabinet agreed to a contract to OBM Limited for the amount of $2,740,00.34 subject to negotiations,” Mr. Rymer said. “Through continued discussion we were able to achieve a substantial reduction: … a savings of approximate $1.6 million. Since taking office in February 2019, the renovation and repair works have been one of my top priorities.”

On Feb. 20, Mr. Rymer announced in the House of Assembly the signing and execution of roof replacement works with the company Professional Roofing. Mr. Rymer said Friday that these repairs are “substantially complete,” and the replacement of all the skylights through Wallan Glass Suppliers is approximately 50 percent complete.

Administered through the Recovery and Development Agency and funded by the Caribbean Development Bank recovery and rehabilitation loan, the contract is one of five signed recently that officials said would help boost the economy as it faces economic hardship in the midst of the coronavirus pandemic.

Officials have pledged to pump $20 million into the economy this year alone through infrastructure works tied closely with the recovery and development of the territory post-Irma.

“The BVI has had some challenges but we feel that contract signings like this and those com- ing forward are strong signs that the rebuild must continue despite our Covid-19 challenges,” Mr. Flax added. “There are a lot of legacy projects that are remaining from the hurricane that I know are in the pipeline.”

“When job sites are humming with activity and projects are going, it sends a strong sign and a positive message to the community and to the territory at large,” he said. “I think it’s important to give kudos to the many public service workers who — despite the current conditions — still remained and did the job. I think it sends a good message to the public that the public service workers are committed to do their job.”

Mr. Flax said OBMI is “also committed as professionals and designers to complete the project, get it done, and get everyone back in the building in time and within budget.”

The firm opened its first office in Bermuda, Mr. Flax said, and it’s second office in the Virgin Islands 54 years ago. It has expanded in the region and internationally, now with seven offices worldwide.

Also on Friday, five companies submitted proposals for consultancy services for the design and construction management of the Magistrates’ Court, according to RDA Head of Communications Colene Penn.

Whoever is awarded the contract will provide architectural, engineering, and contract management services for the project from start to finish.

Additionally, the consultant will engage with stakeholders, lead planning and development phases, and produce final designs for the project. The contract also holds the consultant responsible for assisting in the tender process to award contracts for construction works.