Cabinet recently approved the allocation of almost $1,100,000 over the next two years for temporary measures to address long-standing issues in the criminal justice system that have resulted in a …

END_OF_DOCUMENT_TOKEN_TO_BE_REPLACED 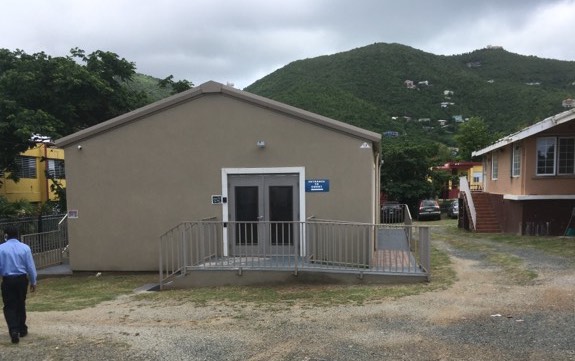 Hearings at the Magistrates’ Court are still held in a modular structure that was intended to serve as a temporary space following Hurricane Irma in 2017. Construction has not yet begun on a planned new Magistrates’ Court building. (Photo: JOEY WALDINGER)

Cabinet recently approved the allocation of almost $1,100,000 over the next two years for temporary measures to address long-standing issues in the criminal justice system that have resulted in a backlog of court cases, according to a summary of a May 28 Cabinet meeting.

The summary noted that Cabinet approved the funding — which previously was considered by the National Security Council at its Feb. 10 meeting — after receiving a report titled “Criminal Courts Transformation: Addressing the Backlog in the British Virgin Islands,” but the Beacon’s attempts to obtain this report were unsuccessful.

The bulk of the approved funding is the $617,800 earmarked “to fill critical legal and administrative positions within the legal departments,” according to the meeting summary.

The Cabinet also agreed to allocate $300,000 for a temporary location for a “second court” until the completion of “Phase I of the Halls of Justice Project.”

This sum will cover two years of rentals, as well as the costs of outfitting the facility with prison cells, air conditioning, IT facilities, and furniture, according to the summary.

The remaining $180,000 approved by the Cabinet will help to “strengthen the linkages between the criminal justice sector and to build capacity,” the summary noted.

During the closed-door Standing Finance Committee deliberations last November, government officials said the criminal justice system was struggling to operate effectively due in part to a lack of personnel and physical resources — problems compounded by hurricanes Irma and Maria.

“The hurricanes placed the Magistrates’ Court in a position where they had to operate with less than the required resources,” Supreme Court Registrar Erica Smith-Penn said, according to a report on the deliberations, adding, “Having three magistrates and one courtroom caused a backlog.”

The number of unresolved cases in the magistracy jumped from roughly 28 before the storms to over 100 afterwards, Ms. Smith-Penn told the SFC, according to the report.

Also during the SFC meeting, acting Deputy Governor’s Office Permanent Secretary Sharleen Dabreo-Lettsome said that Sherrie Griffin, a lawyer and former public officer, had drafted a report that “identified a number of areas where improvements need to be made.”

Ms. Dabreo-Lettsome said this report was subsequently presented to the Criminal Justice Advisory Group, which in turn drafted a framework for addressing many of the issues, according to the report.

It is unclear if the report Ms. Dabreo-Lettsome referenced is the same one mentioned in the May 28 Cabinet summary.

Attempts to reach Ms. Dabreo-Lettsome were not immediately successful.

Government has long promised the construction of a “Halls of Justice” facility that would permanently house the territory’s court system.

As part of that effort, the Deputy Governor’s Office announced in December 2019 that Trojan Design and Development Ltd. was contracted to prepare designs for the new Magistrates’ Court, the first phase of the project.

The DGO also stated the project is being funded by a Caribbean Development Bank loan obtained after Hurricane Irma.

“My government is committed to developing a court facility that is resilient and smart and meets the needs of the people of the Virgin Islands,” Premier Andrew Fahie said in the December 2019 announcement.

Though the press release did not say at the time how much Trojan Design’s contract was worth, in July 2020 Recovery and Development Agency Director of Procurement John Primo announced that the firm was awarded $324,840 to provide architectural, engineering, and construction management services for the construction of the Magistrates’ Court.

That month, the DGO issued another press release saying that the design phase of the new Magistrates’ Court was expected to be completed by the first quarter of 2021, with the construction of the building finished in 2022.

Construction has yet to begin.