Government recently sent out a call for farmers and fishers in the territory, and they answered, according to Education, Culture Youth Affairs, Fisheries and Agriculture Minister Dr. Natalio “Sowande” Wheatley. …

END_OF_DOCUMENT_TOKEN_TO_BE_REPLACED 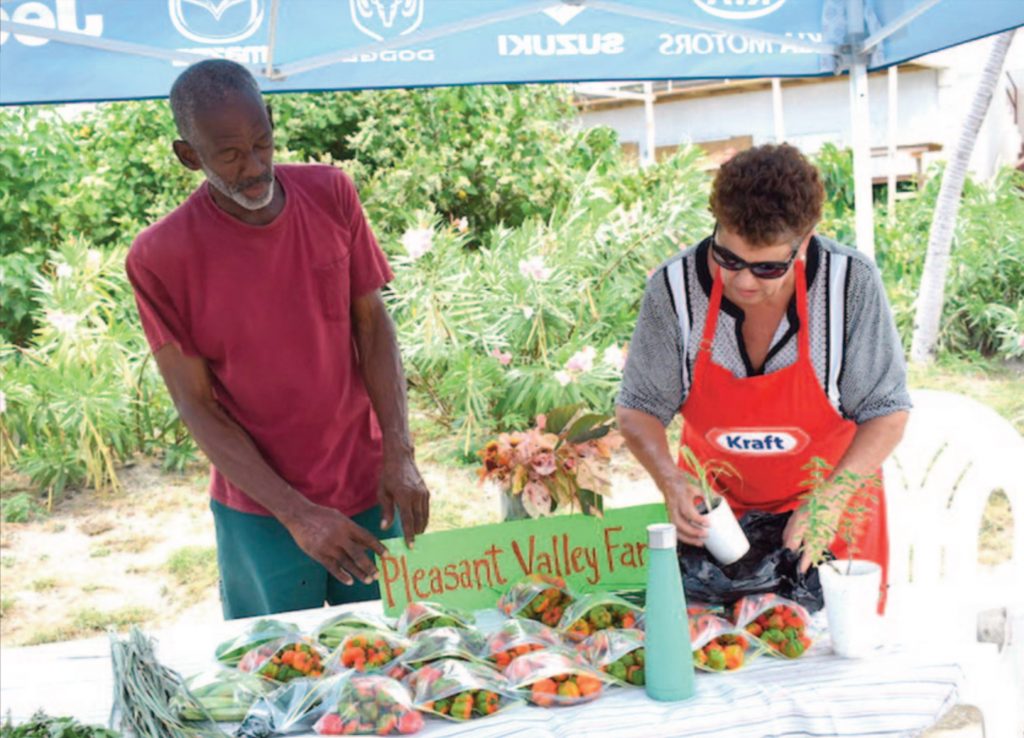 Goods were on display at a farmers market in Sir Olva Georges Plaza in 2018. (File photo: CLAIRE SHEFCHIK)

Government recently sent out a call for farmers and fishers in the territory, and they answered, according to Education, Culture Youth Affairs, Fisheries and Agriculture Minister Dr. Natalio “Sowande” Wheatley.

The $2 million agriculture and fishing stimulus that Cabinet approved on March 20 intends to boost a more self-sustaining food production industry in the Virgin Islands.

As Dr. Wheatley explained last Thursday in the House of Assembly, his ministry invited residents with knowledge of food production to apply for assistance through the stimulus programme to get the tools and supplies they need to restart operations. It received 327 applications, he said.

Of the applicants, 157 are farmers, 82 are fishermen, 83 are both, and five did not specify. The biggest challenges farming applicants faced were lacking irrigation, access to suppliers, import costs, and the need for seeds and seedlings, Dr. Wheatley explained.

Fishers, he added, requested the means to repair damaged vessels and engines, and to maintain their equipment.

Some of the stimulus money could be used to help fishers whose boats were damaged in the 2017 hurricanes, Dr. Wheatley explained.

“My heart is warmed by the overwhelming number of applications received, and the excitement in the fishing and farming sector right now,” he said.

After giving the applications a cursory review, the minister said he didn’t note any applicants from outside the territory, and that assistance from the programme would be reserved for residents.

A Cabinet-appointed working group will guide the utilisation of stimulus money and present monthly progress reports, according to the minister.

Junior Minister for Trade and Economic Development Shereen Flax-Charles will also work with supporting organisations and the Department of Agriculture and Fisheries to provide applicants with training in business, according to Dr. Wheatley.

VI residents formerly produced enough goods to ship to neighbouring islands “in the not so distant past,” the minister said, adding that agriculture could play an integral role in supplementing the VI’s financial services and tourism industries.

“With careful and intentional planning and execution, agriculture and fisheries have the potential to boost and diversify our economy,” he said.

Mr. Wheatley also stressed the importance of backing sustainable VI-based products in light of concerns about how markets could be affected by the Covid-19 pandemic.

The territory spent $377 million on food imports in 2018, Dr. Wheatley noted during the HOA meeting.

“We recognise that we are privileged to have the financial means to access food from the international community and countries across our region,” Dr. Wheatley said, but he added that this privilege that isn’t indefinitely guaranteed.

The minister also offered a vision of marketing VI-based produce on a larger scale.

Dr. Wheatley proposed establishing an entity to purchase locally grown food from multiple farmers to then sell as a larger unit to supermarkets, restaurants and hotels. He was also interested in exploring the possibility of such an entity to provide micro loans to producers.

Initial plans aim to ensure the entity “has a kind of cultural flair and that can really help make the connection between our tourism product and our agriculture and fishing industries,” he explained.

He additionally hopes to see regular farmers markets established in all the territory’s districts.

Also in the works are designs for safe, hygienic facilities for fishers to process their catch, he said.

Supplementary farming projects, including improving irrigation infrastructure and creating a new production plan for crown lands at Paraquita Bay, are high priorities for building a stronger industry, according to the minister.

Dr. Wheatley also lauded Cabinet’s recent leasing of land for two residents to build greenhouses and a poultry farms in the area. He said the greenhouse could be operational as soon as the end of the year.

From the legislative side, Dr. Wheatley said his ministry is reviewing a draft bill to revise agriculture and fishing laws.

“This new bill, when passed, will focus on supporting the industry through regulation, business development and the economic security of fishers and farmers,” he said.

As fresh fish and produce become more widely available, Dr. Wheatley said he hopes it will also help address diet-based health issues in the territory such as diabetes and obesity.

Opposition member Julian Fraser said some constituents didn’t have time to complete their applications before the April 14 deadline. Dr. Wheatley invited ministers to pass along any last-minute applications.