Local News > $2 million to rebuild the police marine base

$2 million to rebuild the police marine base

With a $450,000 grant from the United Kingdom and another $1.6 million from the Virgin Islands government, the Royal VI Police Force Marine Base will become a 24/7 operation, officials …

END_OF_DOCUMENT_TOKEN_TO_BE_REPLACED 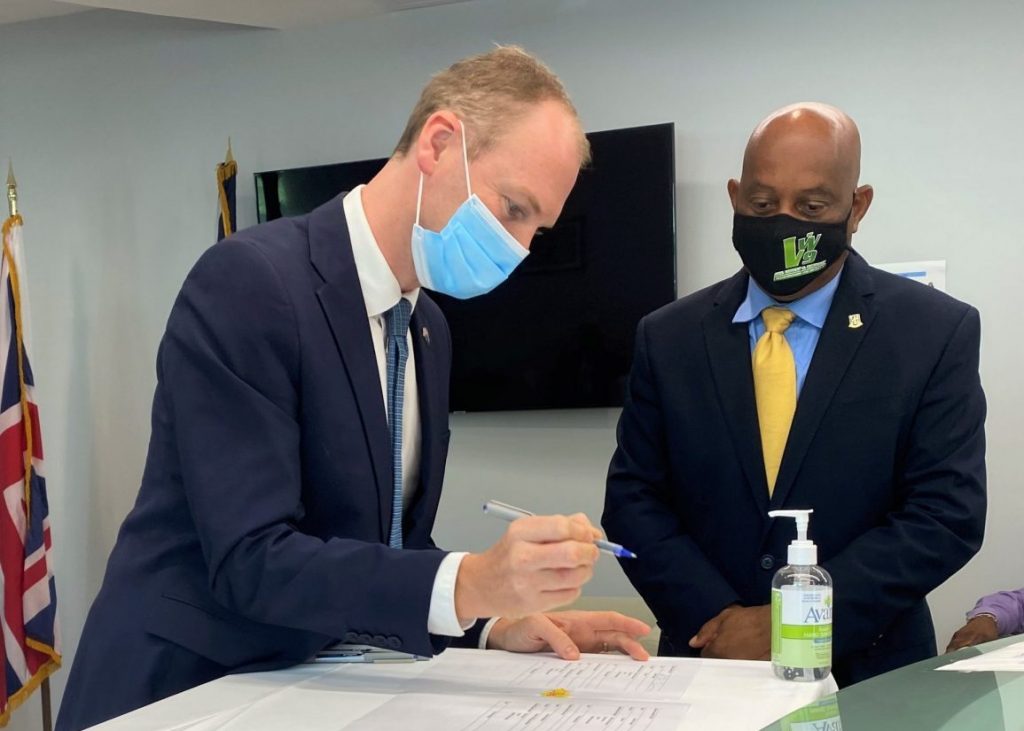 Governor Gus Jaspert and Natural Resources, Labour and Immigration Minister Vincent Wheatley sign an agreement that will add $450,000 to the Virgin Islands Recovery Trust in order to help fund renovations to the police marine base. (Photo: PROVIDED)

With a $450,000 grant from the United Kingdom and another $1.6 million from the Virgin Islands government, the Royal VI Police Force Marine Base will become a 24/7 operation, officials said last week.

Under a “deed of contribution” signed Friday, the UK funding will go into the VI Recovery Trust, which was set up under the VI Recovery and Development Agency Act 2018 to accept contributions for rebuilding efforts, officials explained during a signing ceremony.

The trust is overseen by the board that also oversees the RDA, and all funds that go into it are earmarked for recovery projects.

During the Friday ceremony, which was streamed live on Facebook, Governor Gus Jaspert said the project will “transform the territory’s marine base to become a 24/7 operation that is bigger, better and able to weather any storm.”

Renovations will re-establish an effective operational base for the RVIPF and the Customs and Immigration departments, according to government.

Planned works include site clearance, removal of derelict boats and vehicles, securing of the perimeter, renovation of the main building with adequate office and dormitory space for staff and storage of weapons, a workshop, dockage and boat storage.

“In the short term, it will improve the Joint Task Force’s ability to protect our borders but will also build long-term capability and resilience for the BVI,” the governor added.

Mr. Jaspert said the base was severely damaged during hurricanes Irma and Maria. In its current state, he added, it is “not appropriate” for officers working in challenging conditions.

Better facilities, he said, are needed for those who protect the territory.

“It is about building up our people,” Mr. Jaspert said. “It is also about our second greatest asset: our natural assets of the British Virgin Islands.”

“The partnership between the UK and BVI government is very significant for the BVI as it helps us to move from an economic fishing zone towards an exclusive economic zone,” he stated. “This project will take us far, as I know it will be done in a modern, sophisticated way, giving us extra capacity with the marine police.”