Last Thursday, government officially signed a development agreement with Dr. Henry Jarecki to begin plans for a roughly $200 million project on Norman Island, which is expected to span at …

END_OF_DOCUMENT_TOKEN_TO_BE_REPLACED 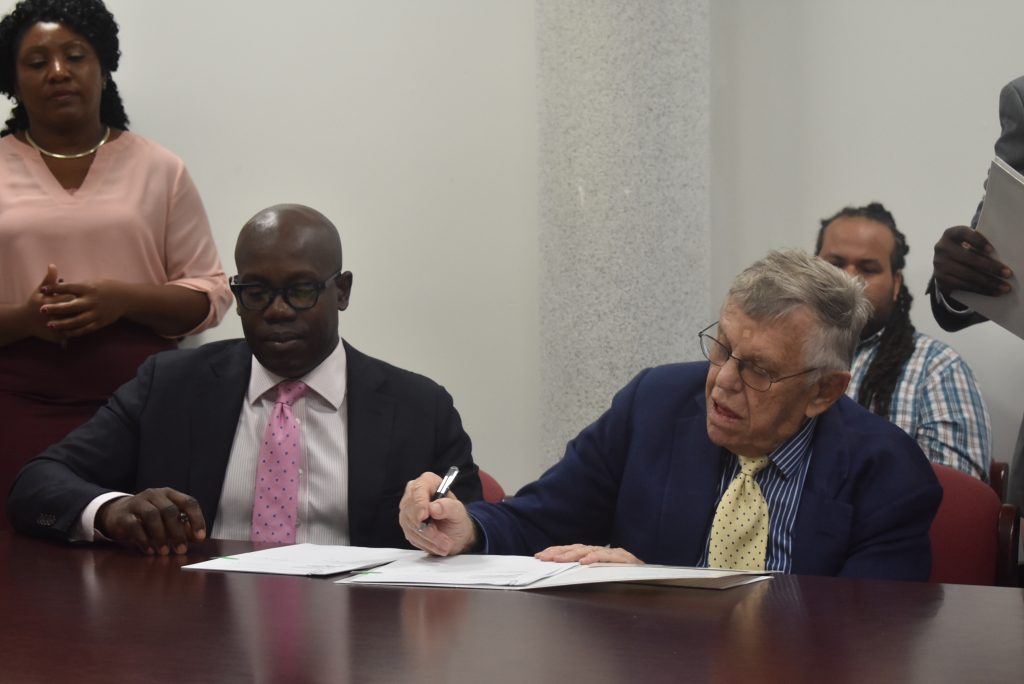 Last Thursday, government officially signed a development agreement with Dr. Henry Jarecki to begin plans for a roughly $200 million project on Norman Island, which is expected to span at least five years.

Dr. Jarecki, owner of the Virgin Islands-based company Audubon Holdings Limited and Norman Island itself, said the development will help to beef up tourism offerings in the territory, especially after last year’s hurricanes.

“There is a simple message. It’s called: BVI is back,” he said at the agreement signing, flanked by his two sons and grandson. “And that is what we’re trying to say most loudly by creating the enhancements that we’re hoping to create over on Norman Island.”

The extensive project calls for the addition of another restaurant, a “floating pool,” a beach bar and a water sports centre.

The plan also includes sites for three potential 20 to 30-room hotels; boat slips for day visitors and residents; a spa; an observatory; and ownership opportunities for 75 to 100 residences that Dr. Jarecki said will be discreetly “hidden in the crevices” of the island.

“Buyers will design their own holiday-oriented residences with the help of local architects and builders,” a government press release stated about the individual properties.

As for public access, developers have said visitors will be free to enjoy the island and its new amenities. The Bight will continue to provide overnight moorings for boaters, and day visitors will have access to the expanded tourism facilities through the island’s existing ferry service and day dockage, the press release stated, adding that more than half of the island will be left as “green space.”

In May, Dr. Jarecki said the Norman development will probably have an activity-oriented focus on swimming and water sports. It will also utilise renewable energy and likely will be off limits to cars, instead relying on golf carts — though that could change over the course of the development, he said.

A road network has already been installed on the island, the investor noted.

Though the project will probably include establishing a homeowners’ association and some uniform building standards, Dr. Jarecki said at the time that he didn’t envision a gated community.

“I wander around there. I run into people all the time all over the island. I wouldn’t change that,” he said.

In May, Dr. Jarecki also said he hoped to break ground on the project about a year later. Earlier this month, he revised that timeline to a year from now, citing the numerous approval and planning stages that must be completed “before you put
the first shovel in the ground.”

Last week, government said the “first phase” of the project is slated to start next year — subject to environmental approvals and meeting planning — but did not provide much other information about what that first phase will entail.

Dr. Jarecki added that members of the public will likely get the chance to discuss the plan in greater detail with officials, and said that funding will need to be raised to build the various pieces of infrastructure.

“I think in the first year you won’t see barely anything because there will be a lot of government agencies and advisory committees that will want to know about [the project],” he said.

Bria Smith, an information officer in the Premier’s Office, said last week that the development agreement itself would be recorded at the High Court Registry. As of press time, the document was not yet available.