On Friday night at Island Sizzle, the competition was heating up, and the table shuddered as a young player on Team Meiomi New Day slammed down a domino during his …

END_OF_DOCUMENT_TOKEN_TO_BE_REPLACED 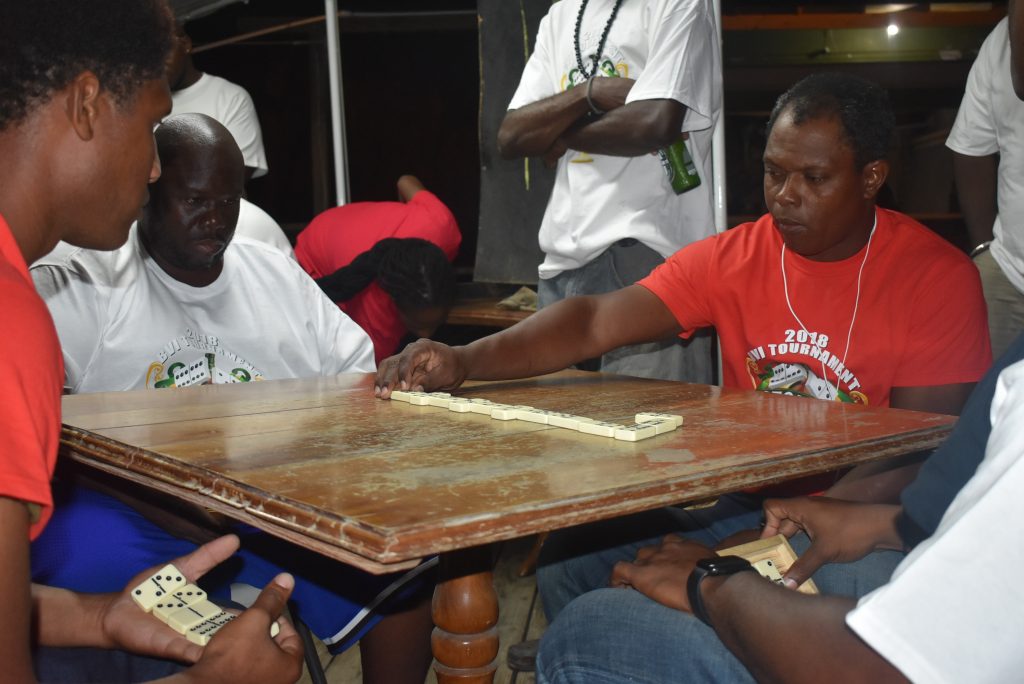 On Friday night at Island Sizzle, the competition was heating up, and the table shuddered as a young player on Team Meiomi New Day slammed down a domino during his match with Team Makers Mark.

A nearby official promptly jumped in.

“The only card you can slam is the winning card,” she chastised him.

Although card slamming is a beloved tradition among casual players, the rules for the first annual BVI Stone’s Dominoes Tournament are stricter. And since Friday marked the first round of the first competitive dominoes tournament in the Virgin Islands for five years, it wasn’t surprising that some players needed a reminder.

“We have a lot of newcomers who have never played competitive dominoes before, so they’re not familiar with the rules, and making a lot of mistakes,” explained Steve George, a former champion and a member of the organising committee. “But after week one, we expect those to improve.”

Although slamming a card may, to an observer, seem like simple enthusiasm, Mr. George explained that it can actually be a form of illegal table talk: A hard slam can signal to a teammate that a player has more of those numbers in his hand; a light touch can mean the opposite.

In competition, the practice is prohibited in order to prevent giving anyone an unfair advantage. The rule is one of many that players new and old alike have to follow as they battle it out for the $1,740 cash prize that awaits the “Champion of Champions.”

Bringing back the game

In a territory where the game has been perennially popular, why so long without a tournament?

“Finding a proper sponsor took a long time, and some persons lost interest,” said Mr. George, nothing that for years tournaments were facilitated by the Department of Youth Affairs and Sports.

Games typically were held on Wednesdays and Fridays, which made it difficult for some to attend, and people commonly left the territory during the competitive season, which runs from September to December.

However, when Tico and Stone’s stepped in offering to sponsor, Mr. George and his co-organisers, Ebony Andrews and Anne Reil, said they knew the time was right.

Ms. Andrews, an employee of Tico, noted that the popularity of dominoes has waxed and waned in the VI over the years, and organisers were concerned that they wouldn’t be able to recruit enough teams to make the tournament viable. Only one team showed up at the initial meeting.

“Coming close to crunch time, we were nervous,” she said.

However, as they went into communities and stepped up recruitment efforts, newcomers and long-time players alike started “begging to be let in,” she said.

Eventually, the deadline was pushed back to allow enough time to print up enough t-shirts for everyone. Overall, 22 four-person teams will face off at 11 different venues across Tortola and Virgin Gorda.

“For a first time, [the turnout] is amazing,” Ms. Andrews said.

Teams will face off every week until Dec. 9, when VG will play Tortola for the Champion of Champions trophy and a cash prize.

The revival is about more than just cash: After a devastating year in the territory, Mr. George said, now is an ideal time to revive competitive dominoes.

“People need something to look forward to at night; need somewhere to go,” he said, adding that the game doesn’t require large amounts of money or time.

“[It’s a] game where you don’t need a lot of commitment to play.” It’s also a good activity for families, he added.

“We try to bring back the fun and laughter,” he said. “Those were the kind of things we were aiming for.”

For a traditionally male-dominated game, Ms. Andrews said she was pleased that more female players signed up this year than ever before, with one team, Boom Boom, being majority female. An all-female team, Kung Fu Girls, also signed up but later withdrew.

“I used to play dominoes at home,” Ms. Andrews added. “I was the only female among all the guys in my area, right in East End.”

Mr. George is a legend among VI competitive dominoes. His team, Entrapment, was the first team on Tortola to win the Champion of Champions trophy.

Now, instead of vying to regain his title, he chose to use his years of experience to recruit teams and serve as a mentor to other players.

“I’ve been around the sport for a very long time,” he said. “With all the knowledge I have on the rules of the game, the different methods and different players, I can set up the right foundation.”

Amid the fierce competition to slam down that winning domino, players and spectators have had a chance to reconnect and socialise.

“People are meeting old friends again,” he said. “I’ve met friends we haven’t seen in a while that I used to compete against. … Overall we’ve achieved a fun atmosphere, and that’s what we’re hoping to have right down to the ninth of December.”

With any luck, organisers said, the tournament will become an annual event. But whatever happens, Ms. Andrews doesn’t predict the game will die out in the VI anytime soon.

“When I’m driving home in the evening times, … you will see groups of guys gathered every day religiously playing dominoes,” she said. “So I know it’s a sport that is well-loved here.”