Nearly five hours into hiking the forests of Guana Island, scientists found just what they were looking for: two healthy corita plants, of the endangered species Agave missionum. They quickly …

END_OF_DOCUMENT_TOKEN_TO_BE_REPLACED 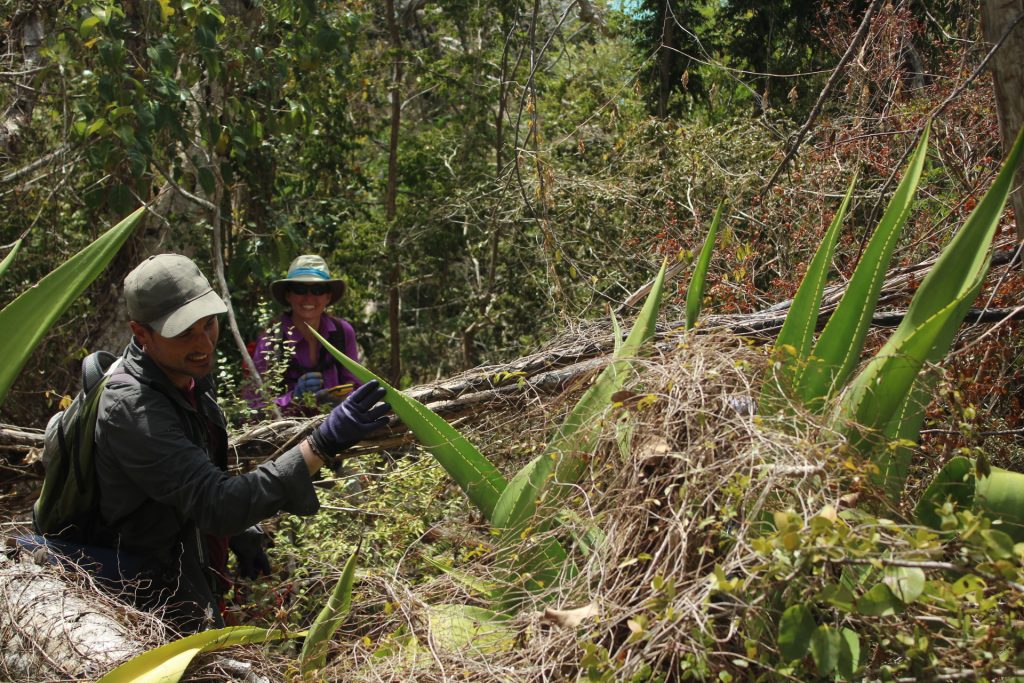 Kew scientists find healthy corita plants of the endangered species Agave missionum after hiking for hours on Guana Island in search of native and endangered plants. Data collected about these plants has contributed to a new guidebook titled Retaining Nature’s Little Secrets, set to be distributed across the territory in the summer.

Nearly five hours into hiking the forests of Guana Island, scientists found just what they were looking for: two healthy corita plants, of the endangered species Agave missionum.

They quickly recorded what they found and specific coordinates to help them find the plants again in the future.

Work like this has been going on for decades in the territory, and for good reason. The Virgin Islands is home to 18 officially designated “tropical important plant areas,” according to scientists who just launched a guidebook titled Retaining Nature’s Little Secrets, copies of which will be distributed in the summer.

On April 2, the National Parks Trust in association with the Royal Botanical Gardens Kew and researchers from the RBG Kew UK Overseas Territories Programme held a public lecture at H. Lavity Stoutt Community College on their findings in the tropical important plant areas, also known as TIPAs.

Part of Kew’s international effort to identify TIPAs across the globe, the VI network is the first to be completed and fully documented, according to Dr. Colin Clubbe, head of conservation science at Kew. Other countries that are currently identifying TIPAs include New Guinea, Bolivia, Guinea, Cameroon, Mozambique and Uganda.

Natural Resources, Labour and Immigration Minister Vincent Wheatley also spoke at the event, ex- plaining the significance of the work in the VI.

“The scientific work conducted has ensured better protected and preservation of habitats that are unique to our Virgin Islands,” Mr. Wheatley said in opening the lecture.

The project is part of an international Kew-wide programme which began in 2015 with Phase One: identifying TIPAs. Working closely with the VI and six other countries around the world, Dr. Clubbe explained how the TIPAs were the first identified in the VI. There are three criteria under which a TIPA can be designated: threatened species, threatened habitats, and botanical richness.

“The BVI is the first place in the world that has applied these international criteria, rigorous science, to identify what are the most important areas,” Dr. Clubbe said.

Eventually, the research conducted will be a beginning to a global strategy that feeds into Sustainable Development Goals laid out by the United Nations General Assembly in 2015 for the year 2030. In this way, he added, the TIPAs identified in the VI will have a long-term ripple effect.

“This is part of a global initiative,” Dr. Clubbe said. “The TIPAs programme is to try and identify these priority sites and work toward conservation and management of these sites.”

Only in the VI

Dr. Martin Hamilton, a research leader from the Kew UKOT Programme, shared with the audience of a couple dozen people four endemic plants that so far have been found only in the VI: the Vachellia anedagensis (poke- me-boy), Metastelma anegadense (wire wist), Senna polyphylla variation neglecta (a bush with yellow flowers), and the Pitcairnia jarechii (a part of the bromeliaceae family).

These species are on the Red List of Threatened Species, a comprehensive inventory published by the International Union for Conservation of Nature.

The VI has 35 species of “national high conservation importance,” 25 of which are globally threatened, according to the scientists. All of this information is in Retaining Nature’s Little Secrets, which will be launched in July.

The guidebook will be distributed across the territory, including schools and tourist areas, in order to educate residents and visitors about the important plants and areas.

Asked by an audience member what residents should do with this information, Nancy Woodfield-Pascoe, deputy director of science, research and environ- mental policy at the NPT, encouraged people to ask themselves, “How can I spread this information?”

Whether it’s a boat captain pointing out certain plants or educators teaching children about ecology, there are many ways to speak for the endangered species on the islands, she said.

Another thing residents can do is trust in technology that allows builders to plan their houses without tearing down the land, Ms. Wood- field-Pascoe added.