65th Festival to kick off tomorrow

With the smooth sounds of Frank Ocean playing in the background, Tia Modeste has been painting booths for the 65th August Emancipation Festival, which will officially kick off tomorrow with …

END_OF_DOCUMENT_TOKEN_TO_BE_REPLACED 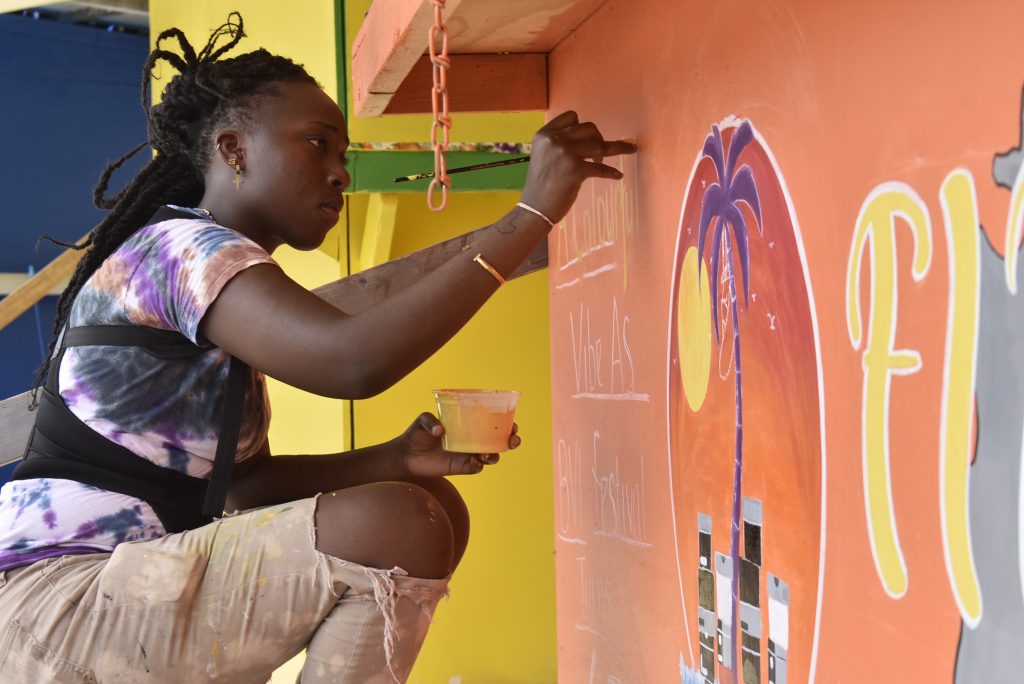 Virgin Islands artist Tia Modeste is home for the summer from studying visual arts in Tampa. She has decorated Festival booths for years and on Tuesday was working on First Connect’s booth. (Photo: ZARRIN TASNIM AHMED)

With the smooth sounds of Frank Ocean playing in the background, Tia Modeste has been painting booths for the 65th August Emancipation Festival, which will officially kick off tomorrow with a candlelight march.

A visual arts student who goes to school in Tampa, Florida, Ms. Modeste said she often paints booths for the annual celebration.

“The owners give me their logo and I take it from there,” she said. “I’m also doing that one over there [Captain’s Kitchen], and my friend who’s also a local artist is doing the one next to me.”

Of the 28 booths in the village, five of them are double-storied and include seating with views of the stage, which was nearing completion on Tuesday. The village, which also contains children’s rides, will open tonight with the Gospel Fest and remain opened until Aug. 10.

“Things are really shaping up. I’m happy where we’re at right now. It won’t always be perfect, but you know: full steam ahead,” said Festivals and Fairs Committee Chairman Carnel Clyne. “We don’t want negativity. Come out and party and have a good time.”

Mr. Clyne said the territory has reached a milestone, not only with the 65th August Emancipation Festival, but also as the 185th year after slavery was outlawed here in 1834. He said a successful festival is one where everyone in the community benefits socially and economically.

“You can say this is our comeback year. With a new government and a new chairman, I’m hoping to get Festival to the point where I can send troupe members to different parts of the world,” he said. “We want to see it get better; we want to see our regional partners get involved as well.”

This year, the parade has over 30 troupes signed up, he said. Flags have been set up at the ferry terminal, welcoming visitors with a pop of colour.

“That’s when you know it’s Festival: when you see strange faces or people you haven’t seen in a long time,” Mr. Clyne said.

Despite negative feedback from some residents across community boards on Facebook regarding the cost of tickets, which range from $10 to $40, Mr. Clyne said, “In my humble opinion, I don’t think it’s that bad.”

He added that regular ticket prices for each artist are more expensive than what the Festival committee is asking, and he recommended getting tickets in advance, when they cost less.

In a press conference at the beginning of the month, Mr. Clyne was tight-lipped about the Festival cost, eventually giving away the $1.5 million price tag. This included funding to pay debts from past festivals.

According to Mr. Clyne, about 95 percent of the vendors for the Virgin Gorda Easter Festival have been paid by the government. The committee hopes to wrap up all expenses for this year’s Festival within a month and “mend relationships” with vendors, he said.

On Tuesday afternoon, all 28 booths were set up in the Festival Village, with owners and friends setting up all the little pieces that come together to run a booth successfully.

Some said a starting investment of around $10,000 is necessary. With an initial $1,500 for each vendor just to claim a space in the village, building materials and labour add up immediately after that. Included with that are decorations and all the provisions needed for the duration of the Festival.

But booth owners like Aubrey Freeman expect to make a profit anyway.

Mr. Freeman set up shop in a day. His booth, Iris’s Place, will sell local foods like salt fish, as well as drinks. He said it cost him $1,750 to build his booth, and that the investment will pay off. He’s been doing it for 15 years and hasn’t lost out yet.

Despite the optimism, booth owners and workers faced some issues during the village’s set up, including the limited use of bathrooms.

Though water and electricity have been supplied for days now, the public bathrooms were not open to them, they said. Additionally, getting in and out of the village posed a problem as vehicle barriers at the entrances were constantly set up and taken down.

Tickets for access to every paid show in Road Town cost $80.