In preparation for the coming school year, students and their family members gathered in the Noel Lloyd Positive Action Movement Park, where they ate snowcones and pizza, played games like …

END_OF_DOCUMENT_TOKEN_TO_BE_REPLACED 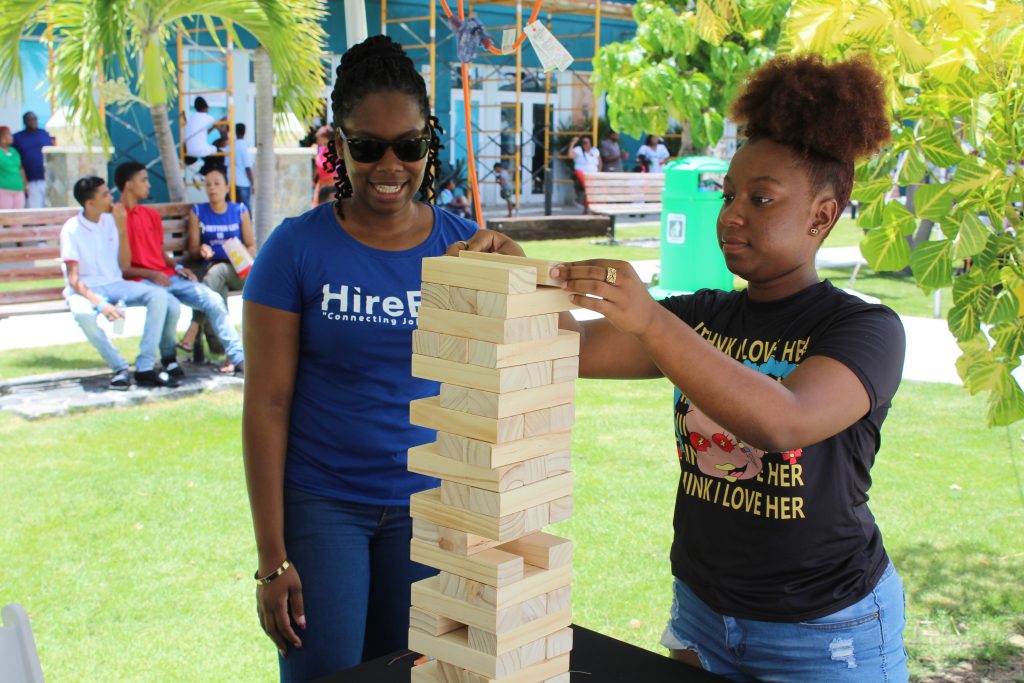 Rekeema Turnbull, founder and managing director of HireBVI, plays Jenga with a friend.
In preparation for the coming school year, students and their family members gathered in the Noel Lloyd Positive Action Movement Park, where they ate snowcones and pizza, played games like Jenga and ring toss, and browsed a variety of after-school activities.
At the firm HireBVI’s first ever Back to School Fun Day on Saturday, Aug. 24, organisers wanted to send students back to class happy, healthy and academically prepared. In addition to the food and games, attendees were encouraged to take advantage of the health screenings, hair styles and school supplies being offered free of charge.
“Today we are here for the purpose of the students. … Our aim is to give back to the community,” said Rekeema Turnbull, the founder and managing director of HireBVI.
Beyond the classroom
While the fair was intended to help students prepare for school, Ms.Turnbull also wanted to ensure that parents and their children had helpful information about how to stay active and engaged in the community once the school day ends.
She enlisted various extracurricular programmes to set up booths at the fair, so that they could educate attendees about the productive ways children across the territory can spend their free time, she said.
“When school is over…where should I put my child?”Ms.Turnbull said, echoing a common question parents ask themselves. “You can take them to dance school, to Boys and Girls Brigade, different things like that.”
Stacia Donovan, who brought her son to the fair, thought that it was especially helpful for families with financial stress—which often was exacerbated by hurricanes Irma and Maria—to learn about such programmes. Some of these parents have to work late into the evening, and such programmes ensure that their children have fun and learn important skills.
“For [anyone] going through tough times after Irma, it takes away some of the financial burden,” Ms.Donovan said.
Fun in the sun
Ms.Donovan learned about the fair through Facebook, and figured it would make for a fun afternoon with her son and an opportunity to chat with old friends and meet new ones.

She spent much of her afternoon looking at the different booths, while her son was a fixture in the bouncy castle, jumping around and having fun with his friends, she said.

The bouncy castle was Solomon Mckie’s favourite part of the fair as well. The sixth grader tagged along with his older sister, who also learned about the fair through Facebook. Besides the bouncy castle, Solomon enjoyed all of the carnival games and overall had a good time, he said.
All smiles
To organise the fair, Ms.Turnbull and the others combed through the HireBVI mailing list to reach out to organisations that might be interested in participating, and many contacted her hoping to help out, she said.
She was moved by the support from the community, but what was most rewarding about the fair was the attendees’ reaction, she said.
“Seeing the small people with smiles on their faces: They’re all excited; they’re all happy,” she said. “For me, that is what means the most to me.”