Three defendants couldn’t hold in their elation the morning of April 4, hugging and whispering excitedly as Justice Richard Floyd announced in High Court that four years after they were …

END_OF_DOCUMENT_TOKEN_TO_BE_REPLACED 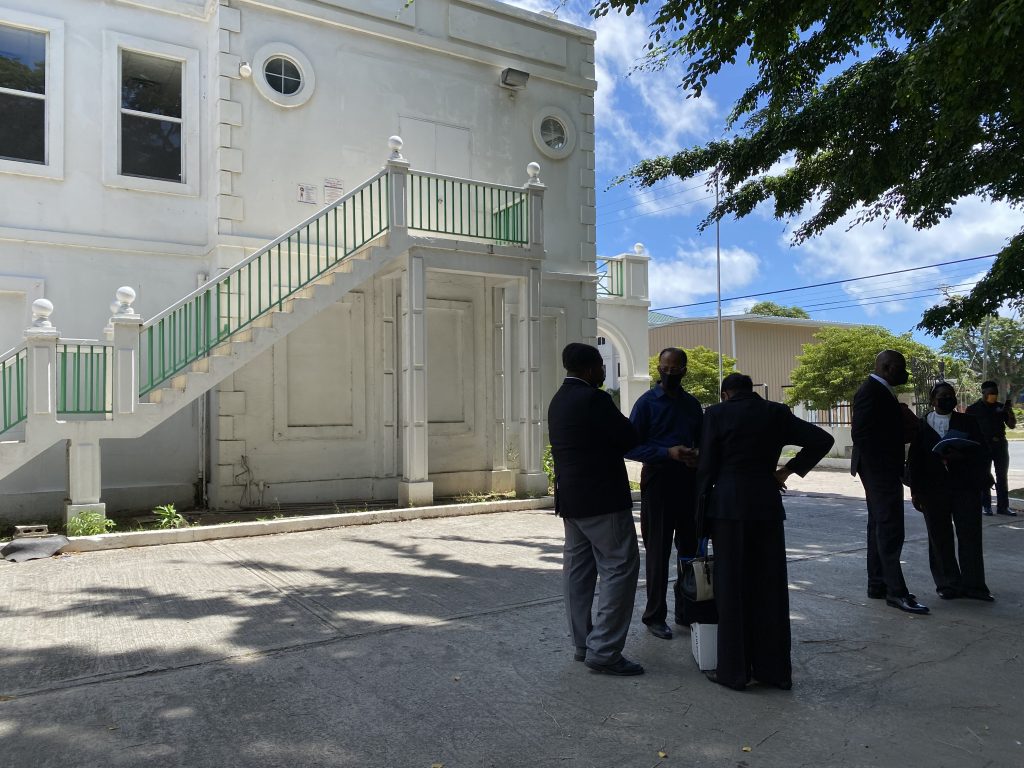 Defence attorneys confer outside the High Court on April 4 after a judge instructed jurors to find Maybelline Rodriguez, Vernon Bernard and Rafael Harrigan not guilty of all charges related to the shooting death of Trumayne “Passion” Daway in February 2018. (Photo: DANA KAMPA)

Three defendants couldn’t hold in their elation the morning of April 4, hugging and whispering excitedly as Justice Richard Floyd announced in High Court that four years after they were charged in the murder of Trumayne “Passion” Daway, he was tossing out their case due to a lack of evidence.

“There are certain legal issues we must follow,” Mr. Floyd said while explaining his ruling that the Crown had not provided enough evidence for the jury to find the defendants guilty. “The case has come to an end.”

The judge commended attorneys from both the defence and prosecution for mounting detailed, well-reasoned arguments during the proceedings. However, he noted that the bar to be met for a murder conviction is high, and he did not find that the Crown had reached that threshold.

The case’s conclusion was cordial on April 4, with all parties offering their gratitude to one another, but later that day the Office of the Director of Public Prosecutions announced its intention to appeal “erroneous decisions” made by Mr. Floyd.

“These erroneous decisions in fact and in law led to the matter being wrongfully dismissed,” the ODPP claimed without providing details of the decisions in question.

On the night of Feb. 27, 2018, Mr. Daway was allegedly shot to death in a vehicle at Brandywine Bay, police said at the time.

Then-DPP Kim Hollis initially built her case around the claim that Ms. Rodriguez acted as a “honey trap” to lure Mr. Daway to his death, alleging during a court appearance in March 2018 that Mr. Bernard met Ms. Rodriguez at the beach shortly after 18 shots were fired from an AK47. During the recent trial, the prosecution tried to prove that Ms. Rodriguez and Mr. Bernard were in a relationship at the time of Mr. Daway’s murder, that they conspired to kill him, and that Mr. Harrigan had supplied the gun used to do it.

The prosecution also presented video evidence that Principal Crown Counsel Kellee-Gai Smith claimed showed that Mr. Harrigan had such a weapon in his home shortly before the incident.

Defence attorneys, however, refuted these allegations and maintained their clients’ innocence.

In his defence of Mr. Harrigan, for instance, attorney Michael Maduro noted that a police search of Mr. Harrigan’s house was done in his absence, and the official search log that documented how police conducted the search apparently went missing.

Richard Rowe, who defended Mr. Bernard, also argued on April 1 that because the gun seen in the Crown’s video was never recovered, there was no proof that it was functional or even capable of being used in the killing.

The prosecution brought its case to a close the afternoon of April 1. Later that day, the defence filed a no-case submission.

Defence attorney Valerie Stephens-Gordon, who represented Ms. Rodriguez, said in an interview after court adjourned that the lack of forensic evidence was key to the judge’s final decision.

Investigating officers never recovered the gun allegedly used in the murder, nor did they find any DNA evidence that any of the three defendants were on the beach that night, she said. Additionally, no eyewitnesses ever came forward, according to testimony from officers.

“No one saw them there,” Ms. Stephens-Gordon explained outside the courthouse on April 4. “No one identified them as being present. At the search of the home, same thing – no DNA, no fingerprints, nothing. It was just made sensational in 2018.”

Mr. Rowe asked in his cross examination of investigating officers on April 1 about evidence collected at the crime scene, which included condoms, condom wrappers, wipes, and several drink bottles. He asked if the defendants’ DNA was found on any of the items, and one of the testifying officers who had seen the scene of the crime answered in the negative.

Mr. Floyd said in court on April 4 he wasn’t surprised when the prosecution announced its intention to appeal his decision, but as of that point, he did not find that the Crown had offered sufficient evidence for a jury to find the defendants guilty “beyond a reasonable doubt” by law.

To the untrained eye, he explained, he realised taking the decision out of the hands of the jury “may seem imminently strange and unusual.”

But Mr. Floyd said he had given the case serious consideration and was guided by specific legal standards in making the call.

The ODPP did not indicate a timeline for bringing its appeal, but Mr. Maduro said in an interview that any appeal would likely not be taken up by the Court of Appeal of the Eastern Caribbean Supreme Court for at least a year.

In the meantime, it will be up to the defendants to decide whether to take any action after awaiting a resolution to the case for four years.

Asked about the conclusion of the case, Ms. Stephens-Gordon said it was a relief to finally get a ruling.

“Justice is served, because they had no evidence,” she said.

Ms. Stephens-Gordon noted that her client had a baby while on remand, and Ms. Rodriguez “can’t get that time back.”

Mr. Maduro gave his compliments to members of the prosecution for their “valid effort” but added, “The evidence on the whole was just weak.”