On the day of the general election in February, former Premier Dr. Orlando Smith signed a development agreement giving preliminary permission to expand a planned community of ten villas into …

END_OF_DOCUMENT_TOKEN_TO_BE_REPLACED 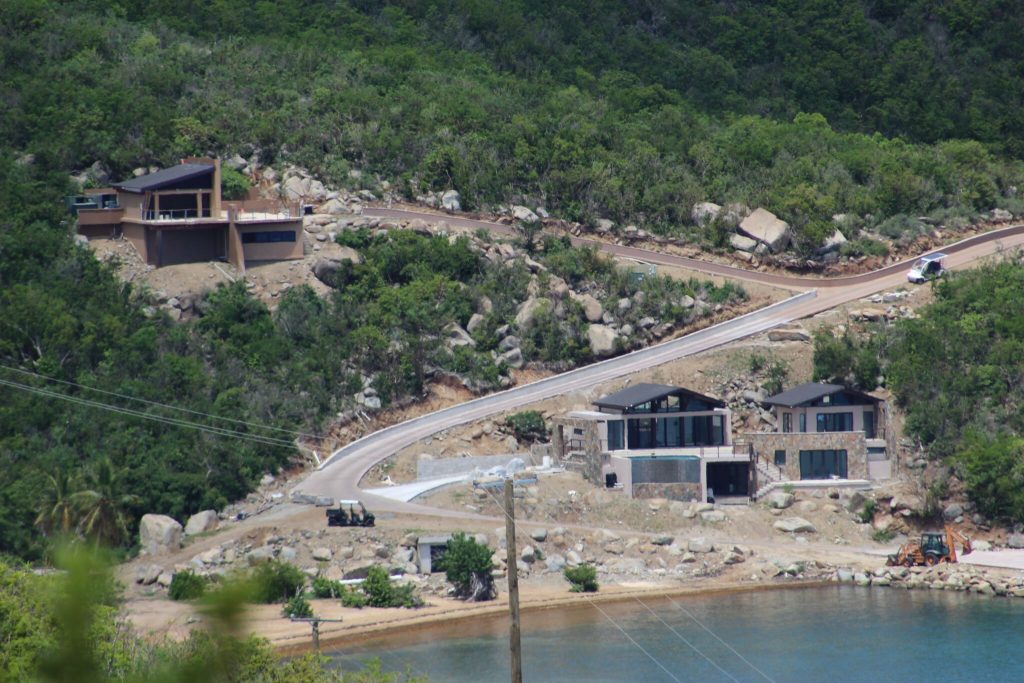 A proposed resort at Blunder Bay in Virgin Gorda could include up to 75 luxury villas. For now, a dock, two buildings, a road and other infrastructure have been constructed. Above are the buildings, which developers said are a manager’s residence and a utility shed. (Photo: NICKLOUS KANHAI)

On the day of the general election in February, former Premier Dr. Orlando Smith signed a development agreement giving preliminary permission to expand a planned community of ten villas into a major resort at Blunder Bay in North Sound, Virgin Gorda.

Expected to cost some $310 million over six years of construction, the proposed project could include up to 75 villas spread over a nearly 66-acre property outfitted with various amenities, according to the agreement.

Since 2013 developers have been leasing 20.75 acres of Crown land at $35,500 a year for the original 10-villa plan, but the new agreement states that government would lease them an additional 45 acres if they can secure a binding agreement with a branded hotel company within a year.

“In my mind as a British Virgin Islander, I’m interested in what’s best for the country,” said Ashburn Harrigan, managing director and shareholder of Blunder Bay Development Corporation Limited, explaining his decision to pursue the partnership. “I saw and thought a branded resort would be a great way to go.”

If the Virgin Islands company can secure the partnership, it would then be entitled to sub-lease undeveloped lots to clients who could commit to building a villa within three years, and it also would have the option of building villas before leasing them out to interested parties.

According to the development agreement, Blunder Bay’s leadership intends to partner with Six Senses, a Bangkok-based firm that manages 16 properties around the world, but neither Mr. Harrigan nor Six Senses would confirm whether a deal has been signed.

“I’m not at liberty to discuss what we have and haven’t done …. We have nondisclosureagreements in place and I cannot answer those questions,”Mr. Harrigan said when asked whether his company had signed a binding agreement with Six Senses.

“Six Senses is continuously in discussions with other parties about different projects world-wide,” she wrote in an email, adding, “We are only able to make information about these projects public at the appropriate time.”

Ron Brash, finance director of Blunder Bay, said Mr. Harrigan has been preparing to sign a “letter of intent” with a “world-class … eco-resort spa brand,” but he too declined to provide more information, citing “signed confidentiality agreements.”

In an interview before the Beacon obtained a copy of the development agreement, Mr. Harrigan maintained that he had partnered with such a company, though he was reluctant to disclose specifics of the agreement and would not name the firm.

The partnership, he said, was motivated primarily by the benefits it would bring to the territory’s economy.

To help the resort along, the development agreement contains various clauses designed to expedite its progress, including requiring the government to assign a project liaison and exempting “key” resort personnel from obtaining work permits.

The agreement also specifies that the developers should provide internship and continuous training opportunities to at least 20 Virgin Islanders in areas including hospitality service and management, and environmental technology advancement.

“If this can happen, it’s gonna be marvelous,” Mr. Brash said.

If realised, the resort would be a dramatic departure from its original iteration, which was still being advertised on the company’s website as of yesterday afternoon.

Previously, Mr. Harrigan had portrayed the original project as roughly 20 acres of land divvied up into ten plots, upon which individuals would custom design residences.

The website advertises a similar plan: “Blunder Bay, stretched along the tranquil blue North Sound on Virgin Gorda, has 10 plots of land for sale, each with a mesmerising view of sailing yachts, boats and pretty neighbouring islands,” it states.

Parts of the website, however, appear not to have been updated recently. “Blunder Bay is in its final phase of development and aims to finish construction of its infrastructure by September 2016,” states a section titled “development schedule.”

The developers told the Beacon that key components already have been completed, such as an 18-slip dock, electrical wiring, a reverse osmosis plant, and two buildings: a manager’s residence and a utility storage facility.

A planned private residence and a beach pavilion, however, remain outstanding.

Construction was slowed when Hurricane Irma damaged both of the completed buildings, which are still being modified, the developers said.

The decision to expand the project came in 2017, when Mr. Harrigan was marketing the development, he said. During this period, he recalled, developers, hotel operators, investors and others approached him with various proposals.

After weighing the options, he decided that partnering with a branded hotel company would bring the greatest economic boon for the Virgin Islands, he said.

“We had an original plan, and we changed the course to go into a bigger project that I thought was … more beneficial for the British Virgin Islands in terms of producing jobs,” Mr. Harrigan explained.

Dr. Smith, the former premier, agreed that a major branded resort would be a tremendous economic win for the territory.

“I realised that …we need to expand and improve our tourism product,” Dr. Smith told the Beacon, adding that he was encouraged by Six Senses’ worldwide prestige when considering the proposal.

“They have Six Senses all around the world, and they are very well regarded.”

Mr. Brash said the project would benefit the economy in many ways, bringing stamp duty, a ten percent hotel tax, payroll taxes and National Health Insurance contributions, among others.

Citing figures provided to Mr. Harrigan by “the brand” in discussions with him, Mr. Brash also said that for every villa, 2.5 jobs would be created.

Additionally, a percentage of the gross annual revenue will be contributed to a sustainability fund to help conserve the environment, Mr. Brash said.

Dr. Smith said that the government has signed several similar development agreements, as they offer developers and the government a measure of “comfortability” by establishing precise terms for the way forward.

“It enables a project … to be carried on more effectively and more efficiently,” Dr. Smith said.

The agreements, however, do not exempt developers from applying for the usual required permissions from the Planning Authority and other government agencies, and the Blunder Bay agreement states as much.

While reporting on this article, the Beacon requested from the Town and Country Planning Department any documents pertaining to the Blunder Bay development.

The agency produced documents associated with the original 20.75-acre proposal: development applications submitted in 2014, 2015 and 2016 — all of which were approved — as well as an environmental impact assessment.

The applications from 2014 and 2015 sought permission for the utility storage facility and manager’s residence, both of which have been completed, according to the developers.

The 2016 application sought permission for the beach pavilion, which has not been completed. The EIA, conducted in 2012, assessed the potential environmental impacts of the proposed 10-villa development.

“A comprehensive evaluation of the study area was carried out and the environmental character of the area was determined,” the document states.

The EIA is dated about seven years before Dr. Smith signed the new development agreement in February, and it takes into account only the ten parcels of land to be developed under the original plan.

However, the development agreement for the 66-acre proposal states that an EIA has been “reviewed and approved in accordance with the requirements of the relevant legislation” — without mentioning that the EIA covered only the original version of the project.

When Mr. Harrigan was asked how the EIA could have been “approved” despite investigating only a fraction of the new development’s proposed size, he said, “I paid someone to do an environmental impact [assessment].”

He added, “You’re asking me now how they did their work: I don’t know; I’m not an environmentalist.”

For the EIA, the developers hired Dr. Cassander Titley O’Neal, executive director of Environmental Systems, who referred questions about specifics of the study back to Mr. Harrigan.

Dr. Titley O’Neal is also listed on the Blunder Bay website as the environmental manager for the project, but Mr. Harrigan maintained that she was never on the company payroll and that she was paid only for executing the EIA.

Chief Planner Greg Adams said that no development application or EIA for the expanded version of the resort had been submitted to the TCPD, and he added that he could not explain how the development agreement could “approve” an EIA that examined a small portion of a proposed project.

“Our process cannot account for any discrepancy in what is submitted to the Planning Authority for consideration versus what may have been discussed with the ministry going forward with the development agreement,” he said.

Premier Andrew Fahie declined to comment for this article.

The EIA outlines various environmental impacts associated with the original development proposal, including “a direct loss of seagrass, associated flora and solitary coral head,” among others.

It also notes, however, that the developers intend to take measures to mitigate the environmental harms and heal the affected ecology, such as the “installation of piles for the main estate dock and private docks … and the intentional replanting of [red mangrove] near the existing dock.”

Mr. Brash added that the developers are considering installing solar panels on the property.

John and Sonia Williams, who are listed on the Blunder Bay website as directors and shareholders of the project, declined to comment for this article, as did Brent Brydon, who is listed as development project manager.