Community centres in the Virgin Islands serve as gathering spaces in good times and as vital shelters during storms, but many of them have sat in ruins since taking severe …

END_OF_DOCUMENT_TOKEN_TO_BE_REPLACED 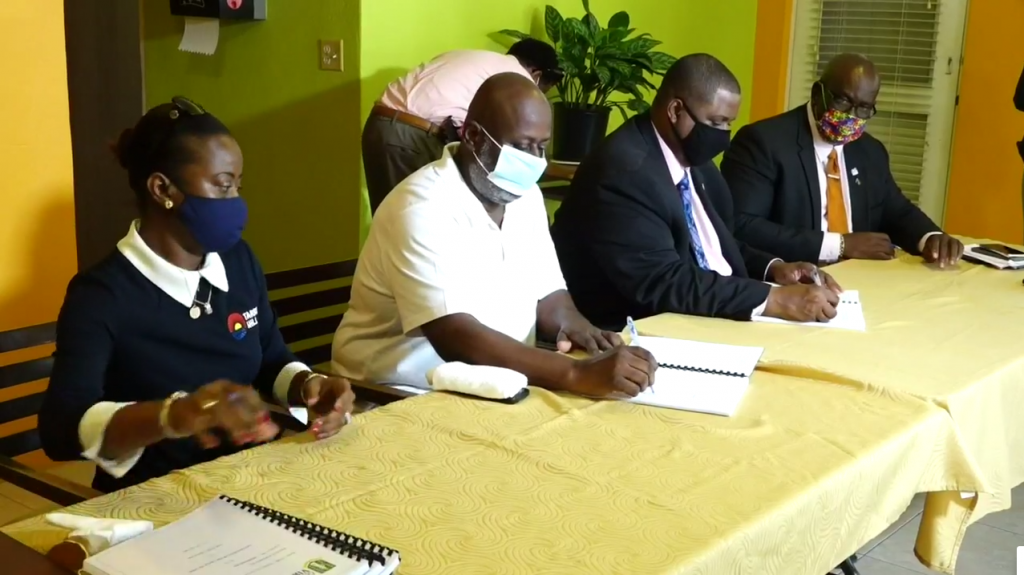 Community centres in the Virgin Islands serve as gathering spaces in good times and as vital shelters during storms, but many of them have sat in ruins since taking severe damage from Hurricane Irma in 2017.

That has begun to change, government leaders said during a ceremony on Friday when they signed a $299,853.37 contract to restore the East End/Long Look Community Centre, which serves the largest population of any centre in the territory and is one of nine facilities slated to get repairs.

The ceremony took place inside the building, a portion of which is currently in use as a senior citizens’ gathering space.

However, the structure still  needs plenty of work, and next month Potter Construction will begin the four-month process of installing windows and doors, electrical and plumbing works, kitchen and bathroom facilities,  and cabinetry, as well as painting, according to Stacie Stoutt-James, acting deputy chief social development officer.

She added that contractor Zane Potter emerged successful  among eight bidders on the project, which went to tender in August 2020.

Mr. Potter promised to complete the project on time and on budget.

He added that the contractor’s sister company, Tarris Hill
Construction, is currently working “full speed ahead” on the Valerie O. Thomas Community  Centre in Sea Cows Bay, set for completion next month.

“I am very proud to have been awarded this contract and] to have the opportunity to serve my community,” he said.

Those are just two of the centres receiving or set to receive attention, according to Premier Andrew Fahie.

“Since taking office, we have done about quite a bit of repair on community centres,” Mr. Fahie said, noting that structures in West End, Sea Cows Bay, Purcell Estate, and North Sound, Virgin Gorda are all undergoing or have undergone works recently.

Preliminary plans also have been drawn up for centres in Cane Garden Bay and Brewers Bay, and plans to repair the Long Trench  centre are pending, he added.

Many of the works were funded by the Emergency Shelter Repair Project, a Pan American Health Organisation-coordinated initiative launched in November 2019 and funded by more than $2.2 million from the European Union to rebuild and improve the VI’s shelter system over two years.

The upgraded shelters are designed to meet PAHO’s “Smart” standards and are to be stocked with emergency relief supplies, officials said at the time  the project launched.

The premier acknowledged getting frequent questions from residents eager to get their local centres repaired.

“Persons ask, ‘What happened to my centre?’ Well, you know we tried to do them in intervals, and make sure the funding is ready and spread it out as much as possible,” he explained.

“For example, I’m the representative of the First District. [They said], ‘You repaired the West End centre; what happened to the Carrot Bay centre?’

And so I tell them, ‘You know, we don’t want it to seem like we are just going to one area alone, so we spread it out over the nine districts to try to  prepare some of the centres in each, and then make a second round and try to continue the repairs on the others.’”

The EE/LL centre, he added, is “crucial” for one of the territory’s main population centres.

“Upon being repaired, it will continue to be one of the main areas where you can come in for a lot of positive activities,” he said.

Deputy Premier Natalio “Sowande” Wheatley — who represents District Seven, an area served by the centre — said he knew firsthand of its importance in sheltering the community.

“I remember the same day of Irma and walking out and watching my community, our community, devastated,” he said. “My children live around the corner there, and the hurricane ripped off their roof. They had to run from their apartment to this centre, and then when this centre started to go, they had  to Francis [Lettsome Primary School].”

Opposition Leader Marlon Penn, who represents the Eighth District, which is also served by  the centre, suggested along with other leaders that it be renamed for its builder, Mr. Lettsome.

As a boy, Mr. Penn said, he worked as a shelter manager there for “two back-to-back hurricanes.”

“Many persons came to the centre for shelter, so that the place would show them a refuge for many, many, many years,” he said, noting that it also served as a venue for numerous weddings, funerals and religious gatherings.

“So it’s fitting that we’re here today to ensure that we continue to build on a legacy that was set for us by the late Spike Lettsome.”