Birdwatching is easier when you know where to look. Luckily for those on the annual Audubon Christmas Bird Count in Anegada on Jan. 5, Rondel Smith Jr. is an expert. …

END_OF_DOCUMENT_TOKEN_TO_BE_REPLACED 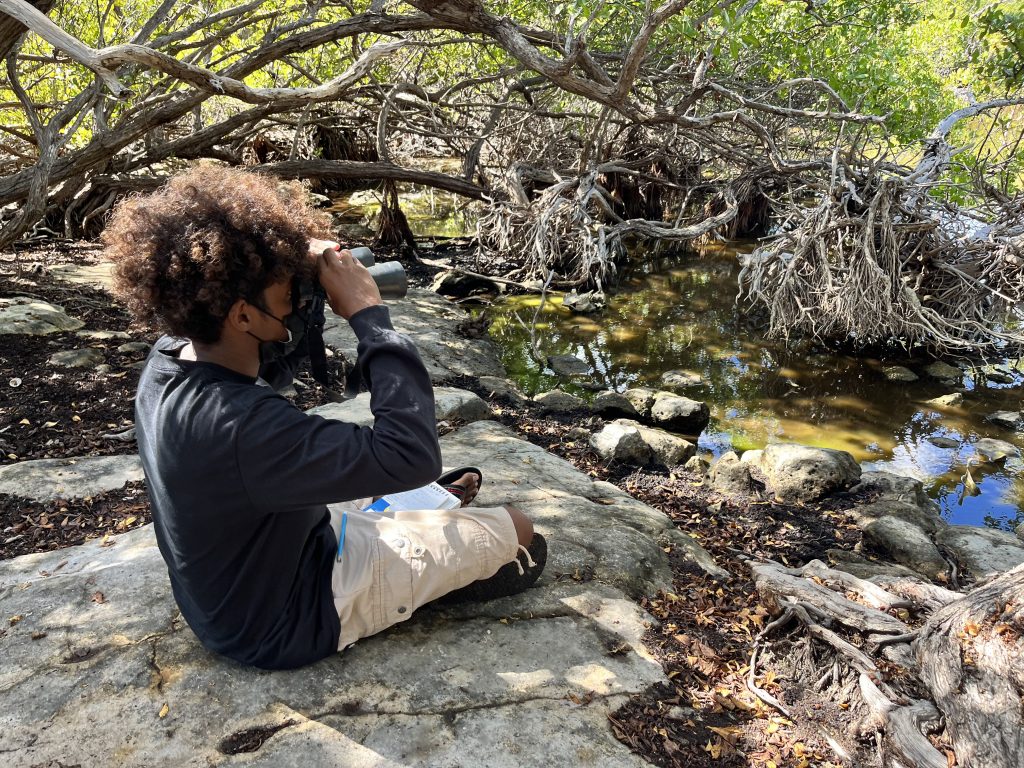 Rondel Smith Jr. looks out of his binoculars to spot some ducks on a salt pond during the Audubon Christmas Bird Count last week on Anegada. An earlier session was held last month on Tortola. (Photo: ZARRIN TASNIM AHMED)

Birdwatching is easier when you know where to look. Luckily for those on the annual Audubon Christmas Bird Count in Anegada on Jan. 5, Rondel Smith Jr. is an expert.

Just off the island’s main road is a small dirt road. It’s unmarked and would go unnoticed to the untrained eye. But Mr. Smith has been scouting spots like these for wildlife.

“Go up a little and turn to the right,” he whispered. “You’ll see ducks on a pond there.”

Sure enough, about 100 feet away was an opening in the trees where ducks were floating on still water.

They swept up in a flurry when they heard footsteps approaching, flying together in a flock that was up to 100 deep.

“I’ll never forget that sound they made,” said Nancy Wood- field-Pascoe, deputy director of the National Parks Trust. “It sounded like an ocean wave. There were just so many of them.”

Mr. Smith and Ms. Woodfield-Pascoe sat on the edge of the salt pond, quietly searching for birds through their binoculars.

The pond was filled with white-cheeked pintails — known for the distinct red line on their faces — and blue-winged teals. But getting a good count was the hard part.

“There are a lot in the distance behind the pond, in the trees,” Mr. Smith noted. “There’s a flock to our right, too.”

To see what other birds were in the area, Mr. Smith pulled out his phone and began playing bird sounds.

“There’s a hummingbird nest right in front of us,” Ms. Woodfield-Pascoe said, pointing to a tree branch with a nest no bigger around than a half-dollar coin.

Nestled within it was an Antillean crested hummingbird.

The spot was a new one for Ms. Woodfield-Pascoe, who has been leading the bird count for several years. Mr. Smith is an avid birder who was happy to join like-minded individuals for a day of birdwatching.

The 20-year-old takes after his father, who frequently joined in the bird count in past years, Ms. Woodfield-Pascoe said. His pictures on the Facebook group BVI Birds and Wildlife have been gaining attention from residents and tourists alike.

Though the Facebook group was created in 2018, more people have taken to the page to share photos in recent years, especially during the pandemic. There are currently 723 members, four of whom joined in the past week.

Ms. Woodfield-Pascoe used the group to post an advertisement for the Christmas Bird Count on Tortola and Anegada. She said some of the 13 participants in the Tortola count on Dec. 28 came out because of that post.

“That’s the most people I have had in a while,” she said on Monday. “I had a lot of new people.”

To lead that count, she asked participants to look for birds in their areas and count how many they found.

She has spots that she visits every year to take bird counts on Tortola, including West End, where she resides; a salt pond in Duffs Bottom; a ghut across from the Festival Village Grounds; a pond behind the Catholic church in East End; and Josiahs Bay.

“I’m looking for the diversity and the quantity of the birds,” she said. “I’m trying to get a good snapshot of what birds are around.”

Ms. Woodfield-Pascoe said the pond in Josiahs Bay has the best birding on Tortola. Flamingos were nesting in the pond last year, she noted. But mangroves in the area are growing back after being damaged in 2017, making viewing a little harder.

“Still we managed to get a really good count,” she said. “It’s good when you go to different places in the [ VI] and compare what you’re seeing.”

Overhead and usually spotted on telephone wires were kingbirds collared dove, which isn’t native to the Virgin Islands, was spotted on a telephone wire this year. Some kestrels were found making homes in nonfunctioning electric boxes atop poles.

Ms. Woodfield-Pascoe caught the early morning ferry from Tortola to Anegada last week, arriving on the flat island and jumping right into the count.

Driving with the windows down, she paid close attention to the sounds she heard along the way and stopped to identify birds. Her first stop was the Flamingo Pond Lookout, where she ran into a tourist snapping photos of the flamingos.

Lisa Holowinski came to Anegada with the sole mission of photographing the flamingos and visiting two beaches. She rented a 600-millimetre telephoto lens, having anticipated that the birds would be in the distance.

Ms. Woodfield-Pascoe invited Ms.Holowinskitojoinin the count before heading to the Fishermen’s Wharf, where she met Mr. Smith.

The two scanned the area for birds, testing their knowledge of bird calls as they heard sounds all around the salt ponds in the area. There, they spotted an egret, a heron and plovers. On a mound out toward the water, a group of terns perched on conch shells.

The pair toured the island, stopping at the airport where a group of cattle egrets gathered, and at the dump, which is now a favourite spot for barn swallows.

“Always check the dump,” Ms. Woodfield-Pascoe said. “You see all kinds of wildlife there.”

Along the way, they stopped at Cow Wreck Beach for lunch and birdspotting, a hidden salt pond, the “red” salt pond, and another salt pond where two groups of flamingos usually flock.

The last stop of the day was the Flamingo Pond Lookout. Mr. Smith pointed the stationary binoculars at the flamingos there and noticed they were doing a mating dance.

“That might be why there are so many here,” he said.

He took out his drone and flew it a safe distance away from the birds to get a good count.

There were 433 flamingos in the group, with nesting mounds nearby.

Ms. Woodfield-Pascoe met up with Ms. Holowinski at the ferry dock at the end of the day.

During an interview, Ms. Holowinski said she would be interested in birdwatching tours in the VI if they were offered. She added that she takes detailed notes in her birdwatcher’s journal and scouts out places where birds are prevalent.

Her fiance Tim Greenlaw said he found some of the best fly fishing of his life on the eastern shore of the island — something he learned about through local business marketing. He saw dozens of turtles and the “biggest bonefish” he’d ever seen, he added.

The pair is from Colorado, where they enjoy the outdoors.

“Our first date was supposed to be a bird count up in Colorado and I couldn’t wait that long, so I invited her on another date,” Mr. Greenlaw said.

They came to the VI to escape the cold winter and vacation in Virgin Gorda.

The birders finished their excursion in Anegada with freshly made chocolate donuts at the shop on the ferry dock.

The NPT has coordinated the annual bird count in the territory since 2003.

“It is an excellent example of citizen science in action,” said NPT Director Dr. Cassander O’Neal.

All the data gathered during the count will be submitted to the National Audubon Society’s database.