Shaquille Walker, 26, excitedly described his plans after being officially named a British overseas territory citizen alongside 41 other people during a ceremony last Friday, May 10, at Government House. …

END_OF_DOCUMENT_TOKEN_TO_BE_REPLACED 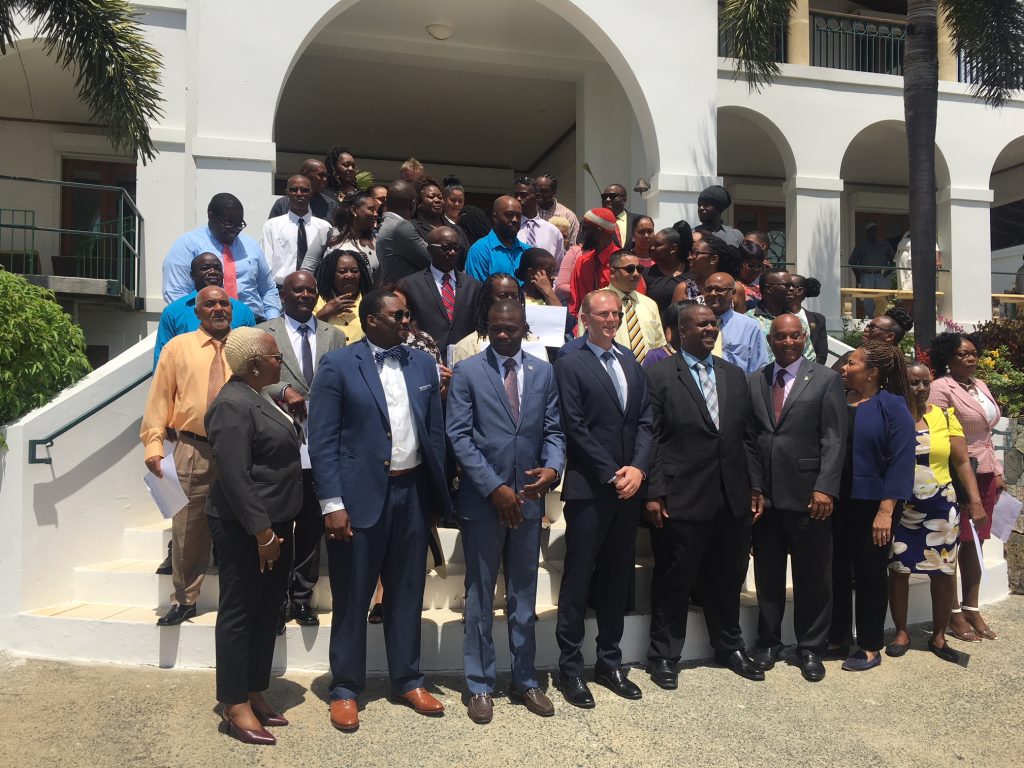 Forty-two people pose with Governor Gus Jaspert and elected officials after they were naturalised Friday during a ceremony at Government House. (Photo: CLAIRE SHEFCHIK)

Shaquille Walker, 26, excitedly described his plans after being officially named a British overseas territory citizen alongside 41 other people during a ceremony last Friday, May 10, at Government House.

Born on Tortola to Trinidadian parents and raised partly in Trinidad, Mr. Walker said he was also excited at the possibility of taking advantage of the visa waiver programme for British citizens so that he could visit his mother in the United States and pursue his education there in the fields of business or art.
“It’s going to make it a lot easier because then I don’t have to go through the visa process,” he said, adding, “I’m honoured because it’s a big steppingstone for me in my life personally.”

During the ceremony, Governor Gus Jaspert handed out certificates of naturalisation, and Registrar General Stephanie Benn led the new citizens in a pledge of loyalty to the Queen and to the Virgin islands. They can now obtain VI passports and apply for registration as British citizens, which allows them to apply for a British passport.

In his remarks, Premier Andrew Fahie, fresh off last week’s announcement of a plan to facilitate residency and belongership applications for all
residents of 15 or more consecutive years, said that the new citizens would help the territory continue to recover and grow.

He called on them to continue to use their varied backgrounds and skills “to help us diversify the economy and unify this territory.”

Despite the territory’s recent difficulties, he added, the VI is on the move, and the new citizens have a vital role to play in it.

“You can assist us by spread- ing the word to the rest of the world that the BVI is open for business — legitimate business,” he said, adding, “Together we will tell it and write a new chapter of prosperity.”

The governor, after handing out a certificate to each new ciizen, pointed out that after the hurricanes of 2017 many residents left the territory and didn’t return.

Those who remained contributed to help rebuilding the territory and further integrated themselves into the community.

“Having been among us for several years, you have taken this bold step to say that our way of life is now your way of life,” he said, adding that the territory is already better off because of their varied contributions and would continue to benefit in years to come. “You are committing yourself loyally to new ties, ties that will stay with you for the rest of your life.”