Since the Social Security Board started processing applications for unemployment relief on June 2, 94 people have received a total of $176,107.74 from the temporary programme funded by a $10 …

END_OF_DOCUMENT_TOKEN_TO_BE_REPLACED 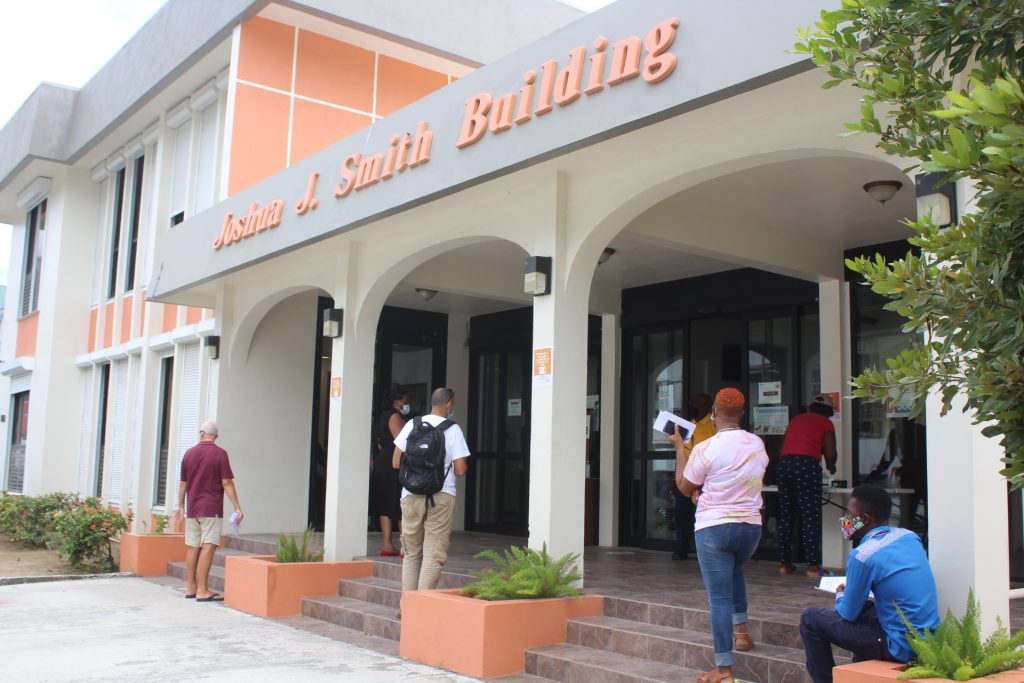 People stand outside the Social Security Board office awaiting applications to file for unemployment assistance shortly after the programme was launched. (Photo: ZARRIN TASNIM AHMED)

Since the Social Security Board started processing applications for unemployment relief on June 2, 94 people have received a total of $176,107.74 from the temporary programme funded by a $10 million SSB grant, Natural Resources, Labour and Immigration Minister Vincent Wheatley said Friday in the House of Assembly.

But those recipients make up less than two percent of the approximately 6,000 people Mr. Wheatley said submitted applications requesting aid for unemployment or underemployment.

And more requests may come soon: About 10,000 forms have been distributed, according to the minister.

With a struggling economy, many are looking for government assistance, but “phase two” of the government’s economic stimulus package has hit some snags since it was announced in late May.

Mr. Wheatley acknowledged the delays on Friday, but sought to reassure the public about the unemployment programme.

“Processing of the benefits is in an accelerated mode as a processing team has identified and corrected glitches in their procedures,” he said.

He reminded the public that the SSB has never before distributed money through an unemployment relief fund, and that a computer programme had to be developed and tested.

The processing team faced many challenges, he said, including incomplete forms, missing bank account and salary information, and the need to contact each employer to verify the applications.

He urged the public to be patient.

“Through BVI love we will get through these times together,” he said.

Meanwhile, some workers said they were told that they were ineligible to apply for assistance because their employers had not paid SSB contributions.

Mr. Wheatley said earlier this month that only residents whose SSB contributions are up to date would be allowed to claim unemployment benefits.

However, some claimed that their employers consistently deducted money from their paycheques but then failed to pay the SSB.

On June 10, Alston Butler commented on the Facebook group The REAL BVI Community Board that it was “unfair to get penalised” for an employer’s wrongdoing.

Linden Jordan replied, “Some employers have been doing so [with] impunity.”

Alexander de Castro added, “This has been going on for years,” claiming that officials “know these companies don’t pay” Social Security and National Health Insurance contributions even though they collect from employees.

During a June 5 interview with 284 Media, Premier Andrew Fahie confirmed the rumours.

“We have some areas where persons just did not pay into Social Security money — not just now during Covid-19 but for quite a while — but the persons were claiming it was coming out of their cheques,” he said. “Whatever the areas are of concern, as we hear them, we are trying to amend them.”

The laws governing Social Security and NHI prohibit the programmes from withholding benefits from employees be- cause their employers have not paid contributions.

However, it is unclear if the same rule applies to the unemployment programme, which is separate from Social Security even though it is being administered by the SSB.

Under a $40 million SSB stimulus grant, $6.5 million also was allocated in grants for small and medium-sized businesses.

Applications for those grants, which were initially promised on June 15, were postponed until last Friday afternoon, officials said last week.

Once Friday afternoon came, government announced further delays in the process, stating that the applications would be available this week.

However, no forms were available as of Beacon press time yesterday afternoon.

As economic stimulus measures continue to roll out, new curfew orders have also come into effect.

On June 17, Mr. Fahie announced a new curfew order, which relaxed previous restrictions from last Thursday. The new curfew is between midnight and 5 a.m. daily. This includes the extension of beach hours, to between 5 a.m. and 7 p.m. daily.

The order also upped the maximum number of people allowed to attend mass gatherings for church services, graduations, weddings and funerals from 50 to 100 people.

A separate ban on scooters also ended yesterday. Starting on June 4, motorbikes and scooters were prohibited from using the roads between 5 p.m. and 5 a.m. A fine of $3,000 was put in place for violations.

Officials have stood by this decision despite concerns raised by the public that the measure was an infringement on freedom and targeted young people.

Mr. Fahie stated on June 4 that the government wants “to ensure the safety of bikers.”

Transportation, Works and Utilities Minister Kye Rymer held discussions with motorists over the course of the three-week prohibition, but no changes were made to the restriction.

Mr. Rymer, however, urged motorists to register their bikes and get their motorcycle licences at the Department of Motor Vehicles. As part of a special initiative, government advertised speedy processing for motorbikes and scooters.

However, few took advantage, Mr. Rymer said Monday in the House of Assembly.

“Only 10 people showed up to get regularised,” he said. “I want to plead to the motoring public for those per- sons that are not legal: I’m asking you to visit the DMV and get sorted out.”

He urged riders to “help us help you” and reassured residents that the government is “making as much preparations for the motoring public as possible.”