More than two months have passed since the last confirmed case of Covid-19 in the territory was announced on May 14, though testing and the return of nationals has not …

END_OF_DOCUMENT_TOKEN_TO_BE_REPLACED 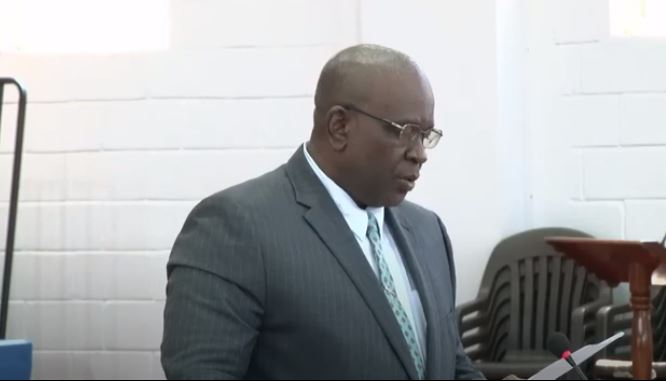 Health and Social Development Minister Carvin Malone provided updates on testing and returning nationals, as well as a breakdown of nearly $12 million spending on resources to battle the pandemic. (PHOTO: Provided)

More than two months have passed since the last confirmed case of Covid-19 in the territory was announced on May 14, though testing and the return of nationals has not slowed down since borders re-opened to belongers on June 2.

As of Friday, 622 people had been tested, and the territory had the capacity to conduct another 3,020 tests, according to Health and Social Development Minister Carvin Malone.

“Of the 412 persons who have now returned to the territory since our borders reopened to nationals and permanent residents, 226 have been released from quarantine after testing negative for the virus,” Mr. Malone said Friday in the House of Assembly. “Approximately 100 nationals are expected to arrive in the territory in July.”

Those being tested include people whose symptoms match Covid-19, all emergency room admissions, hospital inpatients, people undergoing surgery, people requiring tests for travel, healthcare workers, detainees who entered the territory illegally, and people exiting mandatory quarantine, according to the minister.

He added that about 1,400 businesses have been inspected, with approximately 96 percent meeting requirements for re-opening. Additionally, 64 churches, 16 schools, and multiple taxi services were approved by his ministry.

To discourage residents from dropping their guard as the reopening continues, Cabinet decided last week to introduce a “range of penalties” for individuals and businesses not adhering to the government’s rules requiring social distancing and wearing masks, according to Premier Andrew Fahie.

Though the penalties are not finalised or enacted yet, the attorney general will be asked to consider how to legislate them, the premier said on July 8.

The requirements, he said, will include wearing a mask and maintaining at least six feet of social distancing in any indoor or outdoor public space.

For individuals who violate these directives, Cabinet decided that the first offence should result in a warning, the second in a fine and education training, and subsequent offences in further fines, he said.

He didn’t disclose how these penalties would be enforced, or when they are likely to take effect.

On Friday in the HOA, Mr. Fahie also addressed the economic issues the territory has faced due to the pandemic.

“The harsh reality is that many people — most in fact — are out of jobs,” he said. “Their income has been cut. They are running low on food. Some do not have food at all.”

He mentioned the economic assistance programmes put in place by government, also noting that there have been complaints that relief funds “may not be going to the real persons in need or that it is taking too long to get through the bureaucratic processes of government.”

Government set up a temporary $10 million Unemployment Relief Fund funded by part of a $40 million Social Security Board grant, also promising $6.5 million to aid businesses, but there have been complications with both initiatives.

As of Friday, 6,650 people had applied for unemployment aid, but only 1,242 people had received assistance totalling $1,816,079, Natural Resources, Immigration and Labour Minister Vincent Wheatley said Friday in the HOA.

Approximately 800 people didn’t qualify for assistance, he added. Their failure to qualify was caused by various reasons, including the applicants not having contributed to the SSB for a long enough time, he explained.

In response to questions from the opposition, Mr. Wheatley also said Friday that there are 12 people at the SSB assigned to process applications for the $10 million unemployment relief fund, and that those people have been working overtime.

“This is a new benefit for which a new programme had to be written and tested,” he said. “Because of the confidential nature of the information, it isn’t advisable to hire outside temporary help.”

The deadline to apply was yesterday.

Meanwhile, applications for business grants, which initially were to be provided by June 15, are still not available.

Mr. Fahie reminded HOA members that each representative was given $300,000 to help their constituents.

“It is the time for all representatives to go out and help the people with these funds,” he said.

On Monday, the Facebook group “District Six Community Board” posted that the application process backbencher Alvera Maduro-Caines (R-D6) had set up for assistance is closed.

Requests received by Friday’s deadline for District Six residents exceeded $247,000 and were “still climbing,” according to the page.

“The premier instructed us to help with renters’ debt and other expenses, so I’m reviewing each application personally with hopes to begin payments as soon as possible,” Ms. Maduro-Caines explained.

Asked by Opposition Leader Marlon Penn for a total breakdown of the $12 million government initially allocated to fund Covid-19-related support in March, Mr. Malone said that $2,989,992.24 was approved on March 4 to fund precautionary measures.

These included communication initiatives, management of equipment and supplies, and retrofitting of government offices (see below).

Later that month, an additional $8,639,460 was approved, most of which went to the BVI Health Services Authority for purposes including information technologies, the construction of an isolation ward and laboratory, and employment of medical staff.

When Mr. Malone said that an account of the remaining balance would be made available in July, Mr. Penn expressed his hopes that each of the listed expenditures would be more detailed.

SOME $12M IN COVID FUNDING

In March, nearly $12 million of funding for Covid-19 measures was allocated. Health and Social Development Minister Carvin Malone said the money was spent on precautionary measures approved on two dates, and he provided a breakdown of the spending during a House of Assembly sitting on Friday. He noted that any discrepancies and remaining funds would be explained later this month.

On March 20, $8,639,460 was approved to cover additional expenses for the following purposes, the minister said.