Despite heavy rain on Saturday, more than 100 volunteers equipped themselves with waders and gloves, transplanting 632 red mangrove seedlings across the territory. Of those, 204 seedlings were planted in …

END_OF_DOCUMENT_TOKEN_TO_BE_REPLACED 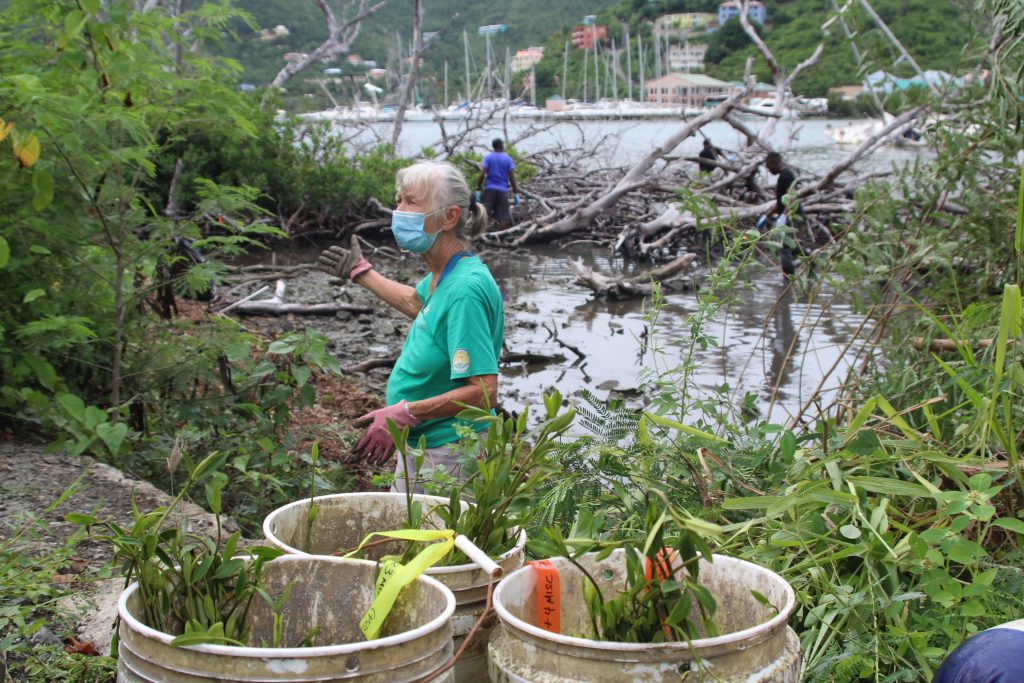 In Sea Cows Bay, a volunteer helps clean up an area where 204 seedlings were planted on Saturday. (Photo: ZARRIN TASNIM AHMED)

Despite heavy rain on Saturday, more than 100 volunteers equipped themselves with waders and gloves, transplanting 632 red mangrove seedlings across the territory.

“I admire what the mangrove team does,” said Alton Bertie, one of the many volunteers who showed up on Saturday at Sea Cows Bay. “As I’m getting more into the ocean and marine life, I understand even more the importance of conservation.”

Mr. Bertie wasted no time in helping out that day, going deep into mud with waders and clearing out debris to plant the seedlings.

“I was really proud of the volunteers that we had,” said Nia Jeffers, manager of the Centre for Applied Marine Sciences Mangrove Nursery at the H. Lavity Stoutt Community College.

At the same time, volunteers helped plant seedlings in West End. On Friday, mangroves were planted in Virgin Gorda.

As part of an ongoing effort supported by the Ministry of Natural Resources, Labour and Immigration, the newly planted seedlings will be monitored by partners including the National Parks Trust and community volunteers.

“Once we have gotten those areas to a place where we believe that they’d be able to continue thriving on their own, we’d look to develop other areas,” Ms. Jeffers said.

Though the batch planted on Saturday began growing in June, the CAMS Nursery is capable of producing hundreds of seedlings per month, according to Dr. Lianna Jarecki, head of HLSCC’s Marine and Maritime Studies.

“Our goal is to supply the ministry and partners with mangrove seedlings needed to restore our coastlines and build resilience to future effects of storms and climate change,” Dr. Jarecki said.

The nursery aims to develop red mangroves, which live closer to the water than black and white mangroves, to the point where they can continue to rehabilitate on their own.

Compared to black and white mangroves, red mangroves have not bounced back as much since the hurricanes, Ms. Jeffers said.

At the end of January, a grant agreement between the ministry, UNITE BVI, and HLSCC was signed. The CAMS Nursery was subsequently established in Paraquita Bay, and it partners with local businesses and community-based youth and environmental organisations.

The nursery is the first of its kind on Tortola, but the second in the territory. In Jost Van Dyke, teams began replanting mangroves from a nursery on that island in February.

The Jost Van Dykes Preservation Society and the CAMS Nursery cleaned out the Sea Cows Bay coastal area in August, according to a Friday press release from government.

“The mangrove site at West End was cleaned on Sept. 26 by a team of volunteers from the Rotary Club of Road Town, Rotaract, and Commercial Dive Services,” the press release added. “Approximately six cubic yards of trash and debris were removed from these two sites combined.”

Ms. Jeffers hopes to host the next planting session soon, and is awaiting confirmation on the next site, she said.

After hurricanes Irma and Maria in 2017, many of the territory’s mangroves were destroyed.

In addition to preventing erosion and providing protection for boats that can be harboured in mangrove coves, the trees also serve as nurseries for fish and other marine life.

“A lot of our local seafood would be aided with the mangroves restoration,” she said.

According to Ms. Jeffers, these are examples of how healthy mangroves can bring a “financial benefit” to the territory.