As of Sunday, 77 businesses had responded to the government’s call to report personnel changes resulting from the recent economic restrictions enacted to curtail the spread of Covid-19 in the …

END_OF_DOCUMENT_TOKEN_TO_BE_REPLACED 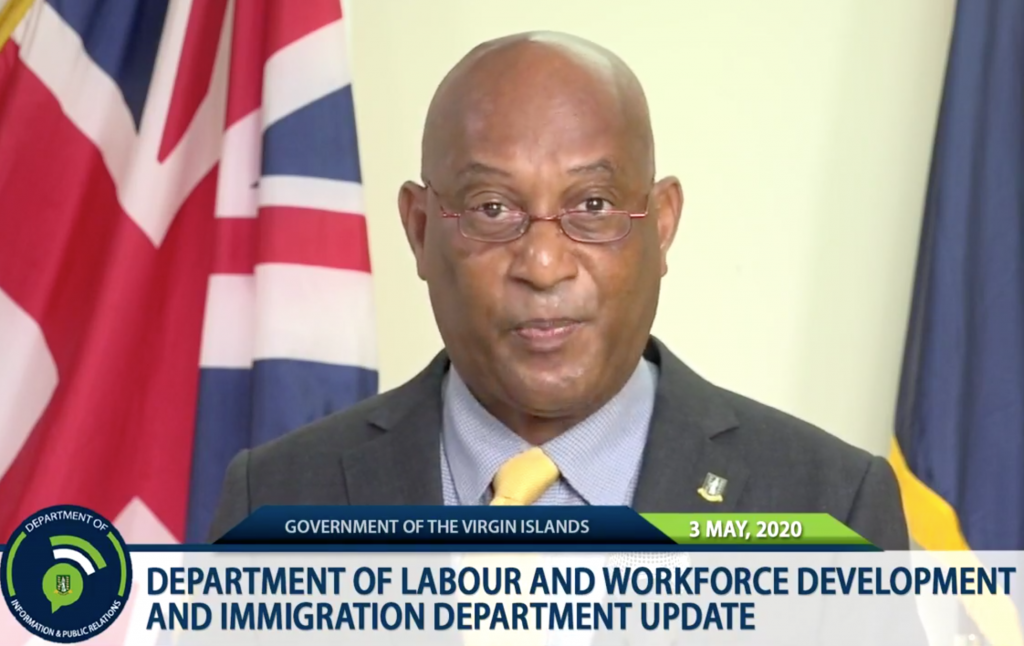 During a Facebook broadcast on May 3, Natural Resources, Labour and Immigration Minister Vincent Wheatley outlined some of the broad changes his ministry is overseeing in response to the coronavirus pandemic. (Photo: GIS)

As of Sunday, 77 businesses had responded to the government’s call to report personnel changes resulting from the recent economic restrictions enacted to curtail the spread of Covid-19 in the Virgin Islands, and the government is doing its best to help affected residents, Natural Resources, Labour, and Immigration Minister Vincent Wheatley said during a Sunday afternoon Facebook broadcast.

All told, those 77 businesses told the Department of Labour and Workforce Development that 72 people have been terminated from their jobs; “approximately 683 [people] have been reported laid off;” and “some persons have been reassigned or reclassified as it relates to salary and/or position,” Mr. Wheatley said.

It is unclear what percentage of the territory’s workforce was represented by the 77 companies: The minister did not mention how many total businesses operate in the territory or how many have not yet reported the information requested.

However, he did say that of the approximately “1,300 employees reported as affected” by the economic measures, 425 are Virgin Islanders or belongers, 493 are work permit holders, and 80 are work permit exempt, while more than 330 are still being classified.

Since the round-the-clock curfew took effect on March 27 and the territory’s economy largely ground to a halt, “approximately” 33 of the 77 businesses that contacted the department have reported closures, Mr. Wheatley said.

“As you would imagine, like the rest of the world, the tourism industry is the hardest hit at this time,” he added. “With the tourism industry being one of our most important economic pillars, which accounts for a large cross section of workers in the territory, any loss in the industry is not only difficult for that sector, but for the economy in general.”

A secretary at the Department of Trade and Consumer Affairs said the office does not have a tally of how many businesses operate in the territory, and attempts to reach the Financial Services Commission and Mr. Wheatley were not immediately successful.

The minister also did not explain the difference between what he meant by “layoffs” and “terminations,” but the former category may refer to the “temporary” layoffs that leaders have said are permitted for up to three months in the 2010 Labour Code.

“I am aware of the economic burden the Covid-19 pandemic has brought to our shores,” Mr. Wheatley said. “However, I would like to appeal to businesses to submit their information to the Department of Labour and Workforce Development to assist in the accuracy of our assessment.”

To assist workers and employers alike, Mr. Wheatley said, the government is working to extend the current three-month “temporary” layoff period; to accommodate expatriates whose work permits have expired during the lockdown; and to take other measures to assist workers who have been impacted by the shuttered economy.

In light of the hundreds of residents reportedly laid off from their jobs, Cabinet is considering an amendment to the Labour Code that would extend the period of time an employee can be “temporarily” laid off before employers are required to provide severance pay.

According to the minister, sections 104(3) and 107 of the law indicate that “if an employee is laid off for more than three months without a date of re-employment, this person is entitled to severance pay if terminated.”

With most businesses struggling as a result of the pandemic, his ministry recognises that doling out severance pay is likely to be an additional burden for some employers, he added.

Mr. Wheatley, however, did not say how long this proposed amendment would aim to extend the lay-off period.

The government has also suspended the issuance of new work permits, temporary work permits and periodic work permits until July 31, according to the minister.

“However, we will continue to accept and process change-of-employer and change-of-position work permits for persons already residing in the BVI,” he said.

Terminated work-permit holders who have lived here for at least five years might qualify for a “conditional permit” that will enable them to remain in the territory and seek employment for three months, according to the minister.

“I am also cognisant that this may call for some non-BVI employees to leave the territory if no viable job opportunities are readily available to them,” he said. “I, however, want to state that while we know that other jurisdictions are already asking persons on work permits and not currently working to leave during this time, the BVI does not see the need for this action at this time.”

And in keeping with social distancing protocols, residents are prohibited from dropping in to the Department of Labour and Workforce Development, and instead must make an appointment beforehand, Mr. Wheatley said.

While VI leaders are still keeping the borders shut until the beginning of June, at which point they will only let in Virgin Islanders and belongers, they are making concessions for travelers who have been stranded in the VI as a result of the restrictive measures and now have invalid landing permits, according to the minister.

Though they will not be penalised, “the Immigration Department does understand the need for this to be regularised,” Mr. Wheatley said.

Such travelers, he added, were contacted by the Immigration Department on May 1 to schedule appointments for the coming week, and anyone who has not yet been able to make an appointment should do so by contacting immigrationinfo@gov.vg.

“I would like to thank these visitors who have become temporary residents due to all measures to safeguard our territory,” Mr. Wheatley said.