Local News > 7 of 9 community centres not ready for storms

7 of 9 community centres not ready for storms

Most of the territory’s community centres are not yet fully repaired nearly four years after Hurricane Irma, though two are now ready to serve as emergency shelters following completion of …

END_OF_DOCUMENT_TOKEN_TO_BE_REPLACED 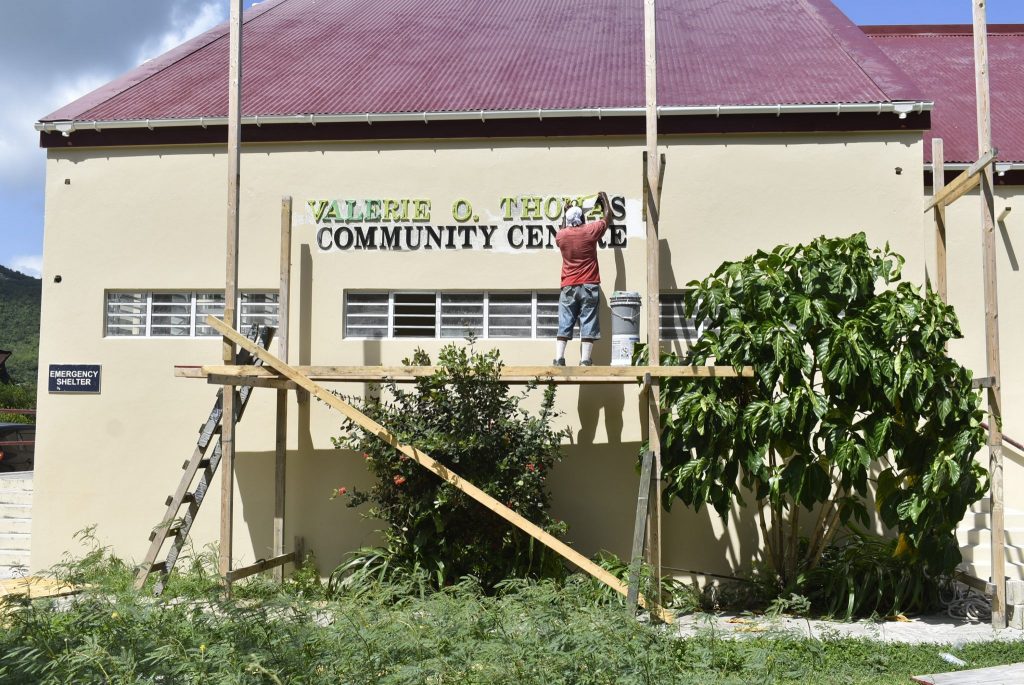 A worker repairs the Valerie O. Thomas Community Centre in Sea Cows Bay in June. The project is still ongoing, as are repairs to several other community centres in the territory. (File photo: ZARRIN TASNIM AHMED)

Most of the territory’s community centres are not yet fully repaired nearly four years after Hurricane Irma, though two are now ready to serve as emergency shelters following completion of recent work, according to Health and Social Development Minister Carvin Malone.

The remainder are still under construction to fix utilities, hurricane shutters and other aspects through a series of projects funded by the European Union, he said.

“While I know as the minister I wish I could be here reporting that all our community centres are prepared and ready for use during this hurricane season, I certainly am proud of the achievements we have made so far,” he said. “Although we are not where we want to be, we certainly are not where we were, and we continue to push this forward.”

Government is still waiting for the official key handover for the West End Community Centre, but the facility is available as a shelter if needed after crews recently repaired electrical and plumbing systems, installed new hurricane shutters, replaced kitchen cabinets, added a concrete porch roof, and built an upstairs bathroom, according to Mr. Malone.

A reopening ceremony, he added, will be held soon.

Construction is ongoing at the Valerie O. Thomas Community Centre in Sea Cows Bay, according to Mr. Malone.

Though the pandemic and “other external factors” delayed the import of hurricane shutters and other important materials, he said, workers completed some repairs to the facility.

He added that the project was scheduled to be done in May, but works should be completed in the next two weeks instead.

At Purcell Community Centre, crews will fix the perimeter fence, install new windows and doors, upgrade kitchen and bathroom facilities, and repair utilities, according to the minister.

He said project manager Ronnie Lettsome told him that his team received and evaluated tenders for the repairs, and a final decision on who to contract is expected in the coming weeks.

The remaining repairs at the Long Trench Community Centre will be publicly tendered “in the near future,” Mr. Malone said.

The project scope is similar to the other facilities but also includes site drainage, he explained, though he did not offer an anticipated timeline for these repairs.

Repairs began the first week of June at the East End/Long Look Community Centre, according to Mr. Malone.

“Unfortunately, work is not progressing as fast as we would have wanted it to go,” Mr. Malone said. “There is a delay in the ordering of the windows, doors and other materials, which is beyond our control and may ultimately affect the expected completion date.”

Meanwhile, Adams Project Management Construction Limited completed design drawings for Brewers Bay Community Centre, which were given to Olle Group (BVI) Limited, the company government selected to survey the project and estimate its cost, according to the minister. Mr. Malone said the project will then go out to bid.

Finally, government selected a contractor for works at the Anegada Community Centre, though the process has not been finalised, the minister said. Mr. Malone added that the name of the company and estimated start date would be announced later.