As she stood outside Mermaid’s Dockside Bar & Grill on Virgin Gorda on Saturday evening, Florida resident Misty Wells explained that she loves sport fishing because participants can always expect …

END_OF_DOCUMENT_TOKEN_TO_BE_REPLACED 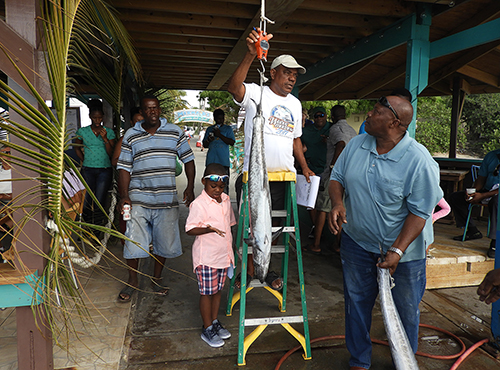 As she stood outside Mermaid’s Dockside Bar & Grill on Virgin Gorda on Saturday evening, Florida resident Misty Wells explained that she loves sport fishing because participants can always expect the unexpected.

“You never know what’s going to happen,” she remarked.

Case in point: Earlier that day, while she was aboard the Lady Evelyn competing in Virgin Gorda’s 21st annual Wahoo Madness Fishermen’s Jamboree, a whale and its calf swam right up beside the vessel.

“I would say they were about 10 feet from us,” she recalled. “They hung around for awhile.”

Although Ms. Wells said she thought the whales were a sign of good luck, the Lady Evelyn ultimately didn’t win this year’s two-day competition.

That honour went to the crew aboard the Ruckus, which was captained by Jerome Emanuel.

The television producer and magazine writer said she was visiting the territory with a film crew to capture fishing footage for the upcoming television show Let’s Take It Outside.

Ms. Wells said she wanted to film in the Virgin Islands because the territory has a wide diversity of fish.

“I love the British Virgin Islands,” she added.

Ninth District Representative Dr. Hubert O’Neal, the captain of Lady Evelyn, said on Tuesday that he was pleased to have Ms. Wells on board.

“She asked me if I would like to host her and her crew and I consented, so she came down,” he explained.

“We had quite a lot of fun,” he remarked.

The captain said he would like to see sport fishing become a “vibrant industry” in the territory.

“I would like to see that happen,” he said. “I think it’s very viable, very possible.”

Dr. O’Neal added that he missed one of his former anglers, Leslie “Shabba” Shotte, who died in January.

This year’s tournament was held in his memory, according to organiser Angie Flax.

Although Ms. Flax noted that there were fewer participants than usual this year, she said the competition was still a success.

“It was a great tournament, as usual,” she remarked.

“We couldn’t have asked for better weather,” he said.

Mr. Thomas said he will likely compete again in next year’s tournament.

“I need to win,” he explained, laughing.