Five years ago Jamaican dancehall performer Buju Banton was still in prison in the United States, where he was convicted of drug charges in 2011. But his management team was …

END_OF_DOCUMENT_TOKEN_TO_BE_REPLACED 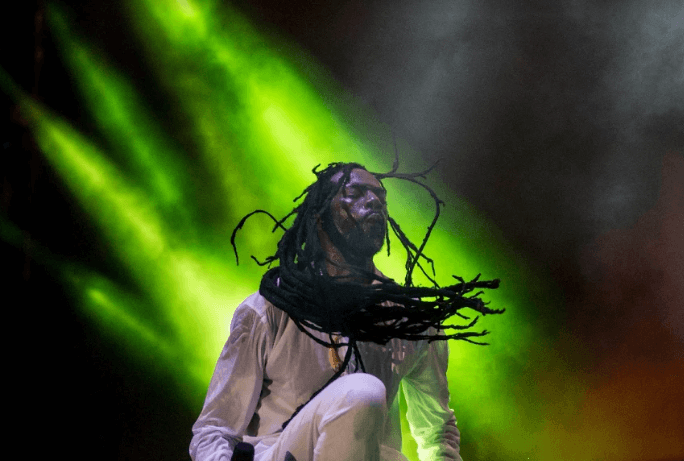 Buju Banton, above, will perform on June 15 at the Festival Village Grounds in what organisers are calling the biggest social event the Virgin Islands has ever hosted. (Photo: PROVIDED)

Five years ago Jamaican dancehall performer Buju Banton was still in prison in the United States, where he was convicted of drug charges in 2011. But his management team was already working on his comeback concert, according to Kennie Thompson.

His company KT Productions was in “constant” contact with them negotiating dates and costs while waiting to hear when the Grammy Award-winning artist would be released from prison.

Once they got the news about his December 2018 release, “everything went into full gear,” he said.

“We knew once Buju was a free man the demand would be great for him, so we started planning way in advance,” Mr. Thompson said at a press conference at Rite Way on May 8. “And we were quite privileged to be selected as a destination for him.”

Buju Banton will be performing here on June 15 as part of his “Long Walk to Freedom” tour, in what several organisers said would be one of the territory’s biggest social events ever.

Mr. Thompson organised the event and is producing the show, which will be held at the Festival Village Grounds in Road Town.

“I think this gives us an opportunity to showcase to the world what the BVI is capable of, that we have recovered, so much so to the point that we can host a show of this magnitude,” said Rhodni Skelton, the deputy director of tourism for the BVI Tourist Board.

Mr. Banton, who rose to fame in 1992, is beloved by many Jamaicans across generations and classes for his music, which often focuses on the poverty and violence in Jamaica.

“Most of you around my age group will know that we grew up listening to a lot of his music,” Mr. Skelton said. “I wanted to be a Rasta at some point in time.”

But he has also faced criticism for the violent homophobic lyrics in his 1992 song “Boom Bye Bye,” which called for the killing of gay men. For years he faced protests, cancelled gigs, and radio station bans as he refused to apologise and, according to The New York Times, made anti-gay statements at a 2006 concert.

British gay-rights activist Peter Tatchell announced in 2007 that Mr. Banton and other reggae stars had signed the “reggae compassionate act” in 2007, pledging to refrain from anti-gay songs and statements, but then Mr. Banton denied signing it, according to the Times.

But in a statement to entertainment news site Urban Islandz in March, Mr. Banton said that he had removed the song from all platforms over which he had control and that he would not perform it at any upcoming shows.

“I recognise that the song has caused much pain to listeners, as well as to my fans, my family and myself. After all the adversity we’ve been through, I am determined to put this song in the past and continue moving forward as an artist and as a man,” Mr. Banton said in the statement. “I affirm once and for all that everyone has the right to live as they so choose. In the
words of the great Dennis Brown, ‘Love and hate can never be friends.’ I welcome everyone to my shows in a spirit of peace and love. Please come join me in that same spirit.”

Several of the organisers and sponsors at the press conference talked about the economic boost that they expect the concert to bring to the VI.

“It’s going to help the economy quite a bit,” said Guy Strickland, managing director of Road Town Wholesale, one of the event’s sponsors. “Not just the hotels and the bars and the restaurants, but all the supermarkets on the island are gonna benefit from at least 8,000 people that are coming.”

Mr. Skelton estimated that income from the departure tax alone would bring in between $300,000 to $400,000, though he did not explain how he arrived at those figures. He added that the event would be a particular boon to the economy after peak tourism season with fewer cruise ships coming in.

Because of the concert, he said, business owners who would otherwise reduce hours and staff can stay open longer and retain employees.

“Buju could not have picked a better time to get out of jail, to come to the BVI now,” he said. Mr. Skelton said most major properties are already booked up for the weekend of the concert, but that the BVI Tourist Board is acting as a “reservations agent” for those still looking for accommodations.

He encouraged guests to look for accommodations in villas in Virgin Gorda and Jost Van Dyke, cottages in Anegada, and “rooms and berths” at sea. He added that the Tourist Board is about to sign off on a partnership with Airbnb and he urged VI guests to look at other sites like HomeAway and FlipKey.

“It’s gonna be tight. Some folks are gonna have to bunk up a little bit and you may have to share your couch,” he said. “Everybody wants to be a part of this, but we’re gonna find ways to host our guests.”

Mr. Thompson said he is working with the Police Department, Customs and Immigration to prepare security for the event. He added that partners in the USVI will also be “patrolling
the ocean.”

Mr. Skelton said that the BVITB is also working with the Environmental Health Division and Community Health Services to prevent the spread of illness.

Governor Gus Jaspert held a special meeting of the National Disaster Management Council on Monday to review the VI’s systems for managing large crowds, according to a Tuesday press release.

“The bar’s set really high,” Mr. Thompson said. “So it’s gonna be a production like we have never seen on the island before.”