86 return to territory in eight days

During a sunny and breezy Sunday, beachgoers crowded Cane Garden Bay, sipping cold drinks and relaxing on beach chairs. No one wore a face mask. But as 5 p.m. approached, …

END_OF_DOCUMENT_TOKEN_TO_BE_REPLACED 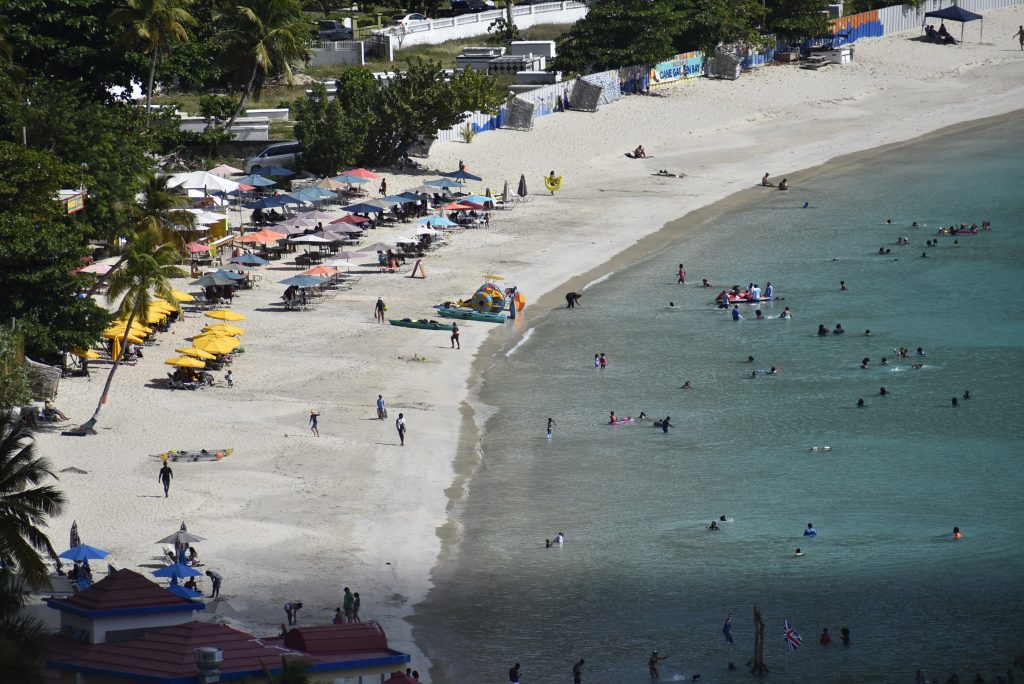 No one wore a face mask.

But as 5 p.m. approached, people stepped out of the water and headed away, adhering to the curfew that prohibits beach use between 5 p.m. and 5 a.m. daily.

Still, with the opening of restaurants and bars until 10 p.m., some patrons of Paradise Bar and Grill and Pusser’s at Myett’s hung around.

The most recent confirmed case of Covid-19 in the Virgin Islands — the territory’s eighth — was announced on May 14, and the patient has recovered since then, meaning that there are no known active cases in the VI, officials have said.

On June 3, Governor Gus Jaspert announced a further relaxation of curfew measures, which allow all businesses to open after passing safety and health inspections.

“I know these continue to be uncertain and unsettling times, but this week I have felt encouraged by how far we have come in our Covid-19 response,” he said. “Many more businesses have re-opened with social distancing measures in place, the public have been able to enjoy our beautiful beaches and restaurants again over the long weekend.”

Movement of boats is also allowed now between 5 a.m. and 5 p.m., except for “exclusion zones” that Mr. Jaspert said would be depicted on a map that will be provided.

“This restriction to daylight hours only on the water is again to help our law enforcement ensure they can keep our borders safe from unauthorised entry,” he said.

Premier Andrew Fahie also published a statement on June 3, listing a restriction on motorbikes and scooters between 5 p.m. and 5 a.m. for a period of three weeks.

The rule sparked outrage on social media, where the measure was described as “unfair” and “a limitation of freedom.”

Transportation, Works and Utilities Minister Kye Rymer posted on his Facebook page that he met with 284 REVERZ, a biker association in the Virgin Islands, on Saturday.

“It was important for me to hear them out and be able to walk away with a better understanding as to how we can work together towards a positive outcome,” he wrote. “We are hoping to use this opportunity as a catalyst for change, as we continue to improve movement on our roadways as I am committed to working with everyone involved, especially our young people.”

Mr. Fahie did not give an explanation as to why the ban was enacted, but he said it remains in effect until June 25.

In his statement, the premier said that all people who are returning from overseas will be quarantined for two weeks and have security on their premises 24 hours a day.

“It important to emphasise that our returning nationals and residents must adhere to the health and safety requirements that are in place,” he said. “This includes following the mandatory quarantine procedures. A measure such as security has been implemented to ensure that persons adhere to the mandatory procedures.”

At the time, he did not provide specific details about how security would be provided. But the Office of the Deputy Governor posted announcements on Facebook encouraging all security businesses to contact the government to help.

The office also invited all belongers and valid work permit holders without criminal records to contact the office for “immediate engagement.”

During a House of Assembly meeting on Friday, Health and Social Development Minister Carvin Malone provided updates on the number of people returning from abroad.

“We have 498 registrations thus far of persons seeking to come back home, 118 of those approved for home quarantine,” Mr. Malone said on Friday during the House of Assembly. “Twenty-seven persons will be returned between the 3rd and 4th of June, 14 persons are expected today, 12 on Saturday, 15 on Sunday — all subject to clearance from Public Health. And the Control and Suppression Act is intended to help guide these persons.”

The government released an infographic yesterday morning, and so far 86 people had arrived through the Terrance B. Lettsome International Airport since borders re-opened on June 2, and that all of the returning people are under 24-hour security.

However, some residents quickly turned to Facebook to claim that returning citizens were breaking mandatory quarantine and leaving their homes, sometimes at the encouragement of their families and peers.

Mr. Fahie refuted the rumours in the HOA on Monday. “We heard some rumours this weekend about persons who came in,” he said, adding, “We have
found them not to be factual.”

Until next Monday, those who have approved quarantine spaces at home or elsewhere in the territory are being allowed back into the territory along with health background checks.

Recently, government asked hotels and villas to consider partnering with the government to provide such quarantine facilities.

“We have come this far by following the guidelines from the Ministry of Health and the Health Emergency Operations Centre,” Mr. Fahie said. “We have seen the positive results that keep everyone safe. Therefore, by continuing along this path, we will get through this together.”

According to Microsoft’s live Covid-19 tracker, the VI ties in sixth place with the lowest number of confirmed cases amongst 213 affected countries and territories in the world.

As of Tuesday night, there were 7,185,573 confirmed cases of the virus, and 408,954 fatalities. The United States has the most confirmed cases, at just over two million, followed by Brazil, which has 742,084 confirmed cases.

Neighbouring territories and countries vary widely in numbers: Anguilla has confirmed three cases, but the USVI has confirmed 71. Puerto Rico has confirmed 5,185 cases, of which 142 were fatal.

CASES IN THE REGION