Having laid in ruin since Hurricane Irma passed in 2017, the National Emergency Operations Centre will soon be demolished, and a state-of-the-art centre will be built in its place, officials …

END_OF_DOCUMENT_TOKEN_TO_BE_REPLACED 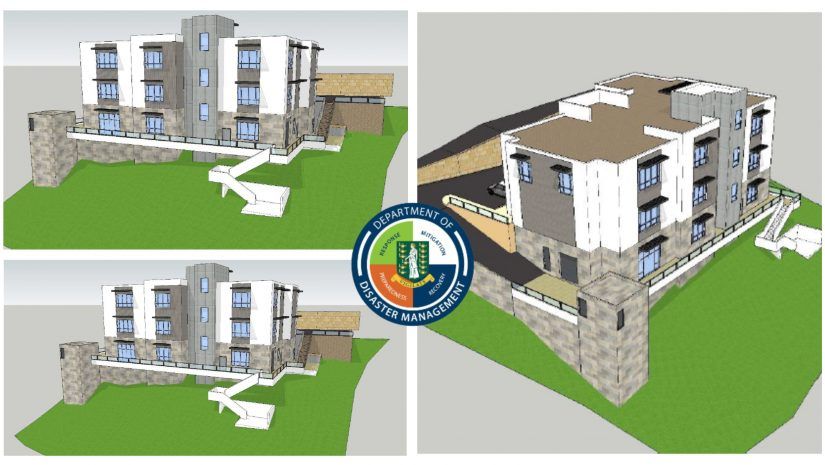 Plans for the new building that will house the National Emergency Operations Centre and Department of Disaster Management were unveiled at a contract-signing ceremony last Thursday. (Photo: PROVIDED)

Having laid in ruin since Hurricane Irma passed in 2017, the National Emergency Operations Centre will soon be demolished, and a state-of-the-art centre will be built in its place, officials announced last week.

Government has signed a $9,803,215.53 contract for the 18-month project, which will be funded by the Caribbean Development Bank’s Rehabilitation and Reconstruction Loan and will accommodate the Department of Disaster Management as well.

“The fact that the [Virgin Islands] continues to be able to access millions of dollars [of] CDB funding is proof positive that everything is aboveboard in how your government is responsibly managing these funds and that we are performing according to international standards,” Premier Andrew Fahie said last Thursday during a contract signing ceremony that was broadcast on Facebook. “We promised the people of the territory that we would ensure the funds are allocated to have our public officers at DDM working in a fit-for-purpose and resilient accommodation. We are well aware of our exposure due to our geographic location when it comes to the threat of hurricanes and similar disasters.”

Out of six tenderers, VI-based companies Tandem Development and D&B Heavy Equipment Services Ltd. successfully bid on the project and will work on it together, according to government.

The 18,028-square-foot building was designed by the Puerto Rico firm Virella, Crespo and Associates to meet the new International Building Code and the Organisation of Eastern Caribbean States Building Code, government explained.

It is also expected to meet the Leadership in Energy and Environmental Design standard, which is a green building certification programme used worldwide.

Dr. Drexel Glasgow, director of projects in the Ministry of Finance, said the facility will be “exemplary.”

“It will be the first of its kind in the Caribbean,” Dr. Glasgow said at the ceremony. “We focused on sustainable and resilient development elements, energy and water efficiency, and care for the environment, so it’s something that, when it is complete, we would be very proud of.”

The premier called the signing of the contract a fulfillment of government’s “promise to the people of the Virgin Islands.”

He also announced that amendments to laws such as the Customs Act will “act as a catalyst for our transition to green and clean energy.”

“I look forward to us continuing on this path, because as a small island developing country we are on the frontline of climate change and rising sea levels — so we must set the example and show that sustainable development is possible in harmony with the environment,” he said.

The project has been a long time coming. Previous plans for the building were originally drawn up in 2010.

That year, architectural designs, engineering drawings and geotechnical studies were completed and submitted for a $4.3 million, 17,762-square-foot building designed to withstand various types of natural disasters.

However, Cabinet never approved funding for the project in spite of repeated warnings from then-DDM Director Sharleen Dabreo-Lettsome that the DDM’s McNamara headquarters — which served as the NEOC — couldn’t withstand a major storm.

When Hurricane Irma hit in September 2017, she was proved right: The DDM building was destroyed, forcing Ms. Dabreo-Lettsome, her staff and other senior officials to flee during the eye of the storm.

After the hurricane, the NEOC temporarily relocated to the Dr. Orlando Smith Hospital, and then to the Ritter House on Wickhams Cay II. More recently, DDM has been operating out of a space in Simms Mini Mall in Road Town.

A tender process for the construction of the new building got under way in the first quarter of 2019, officials said at the time.

During a community meeting in October 2018, engineers from Virella Crespo said the facility will be built to withstand wind speeds of 220 miles per hour; will include fire-rated stairs and fire-suppression systems; and will be handicap accessible.

Ms. Dabreo-Lettsome, who is now the permanent secretary in the Office of the Deputy Governor, said that government is “confident” that the structure “will take us through the many hazards that we experience in this territory.”