Since the borders opened to tourists on Dec. 1, the Virgin Islands has nine active cases of Covid-19 among recent arrivals, some of whom recently breached quarantine procedures, officials said …

END_OF_DOCUMENT_TOKEN_TO_BE_REPLACED 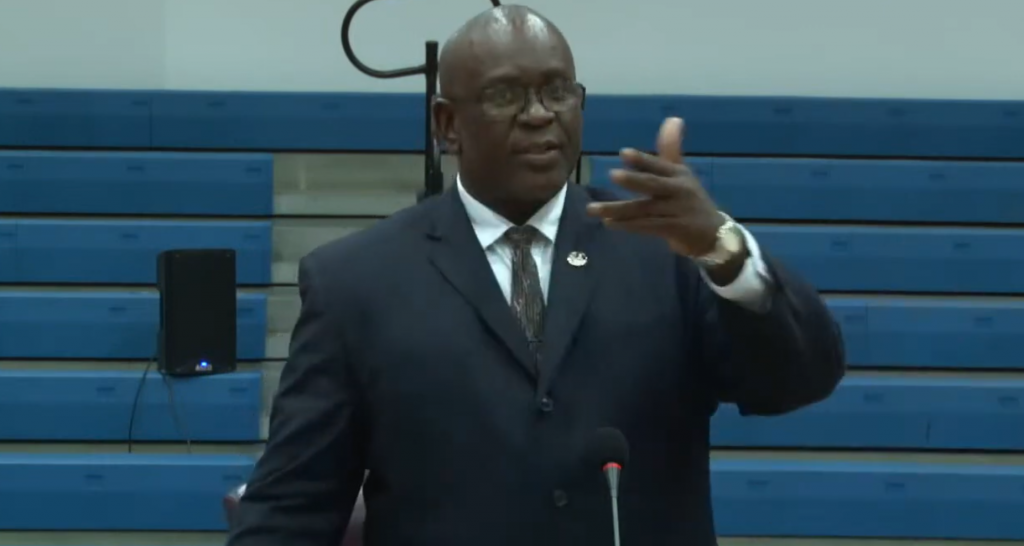 Minister for Health and Social Development Carvin Malone spoke in the House of Assembly on Monday about the recent Covid-19 cases. (Photo: GOVERNMENT OF THE VI/YOUTUBE)

Since the borders opened to tourists on Dec. 1, the Virgin Islands has nine active cases of Covid-19 among recent arrivals, some of whom recently breached quarantine procedures, officials said this week.

Currently, all of the cases are in quarantine, and the Ministry of Health and Social Development is tracing contacts to try to stem any possible spread, according to a Tuesday circular issued by government, which asked anyone who visited the Willy T between 3 and 6 p.m. on Friday or Pusser’s in Sopers
Hole from 6:45 p.m. to 8 p.m. on Monday to contact the Public Health Division.

As contact tracing continued on Tuesday, 16 contacts had already been traced and tested negative, Mr. Fahie announced, with “a few more” having been located and still to be tested.

“And hopefully they’ll be negative, too,” he said.

Speaking on Tuesday in the  House of Assembly, Health and Social Development Minister Carvin Malone denounced the breaches.

“We are going to make sure that persons understand that if they see something that they have to say something because we cannot afford for any of these persons who are deemed positive at the end of four [days to be] out partying,” he said, adding that health protocols work “if everyone will
do their part.”

Citing the fact that the cases were caught during the quarantine period, Mr. Fahie argued that his government’s reopening protocols — which were loosened after criticism that they were too strict — are working as they should.

However, he called the quarantine breaches “totally irresponsible.” “It’s disrespectful to the people of the territory,” he said.

He added that he planned to push for a significant fine to be
levelled against the violators. Currently, $1,000 is the maximum fine for quarantine breach under the Covid-19 Control and Suppression (Entry of Persons) Regulations, 2020.

He also used the opportunity to push back against criticism he had received for his decisions on the reentry protocols.

“When I as the premier have to put my foot down on certain things and say no, they start to say that I’m a dictator,” he complained. “And the members on
my side and the [attorney general] would know that I checked so many things that I must be asking the same question 10 to 15 times, because I know if it goes wrong, the first person they’re going to hold accountable is the
premier.”

The new cases bring the total number confirmed so far in the territory as of Tuesday to 83, with 73 recovered, nine still active and one death. As of Tuesday, the total number of samples tested by the BVI Health Services Authority was 10,274, with 9,867 individuals tested, nearly one third of the population of about 30,000 people.

Meanwhile, recent arrivals continued to air mixed reports about their experiences with the new entry protocols.

Some reported smooth entries and few problems. VI resident Darrel Hearne, who arrived last week aboard a commercial vessel, described the process on Facebook as “quick and painless, with customs, immigration and [the] health department all being prompt and friendly, despite it being a weekend. Our taxi was waiting to take us to be tested.”

He and the rest of the vessel’s crew completed the required testing on days one and four and received their results promptly, he said.

“There has been a lot of negative talk about the new protocols for visitors and returning residents,” he wrote. “I wanted to share my positive experience.”

But accounts also surfaced on social media this week about the malfunctioning of the monitoring bracelets and tracking apps that all new arrivals are required to purchase.

Tyler Karaszewski, a visitor from Oregon, reported that the “smart watch”-style monitoring bracelets he and his wife were given short-circuited within a day of his arrival after they went for a brief swim while staying in their
villa. They were unable to turn the devices back on.

“We were never given any contact information for anyone at the government,” he noted, adding, “No one ever tried to contact us. Yes, you would think they
would try to get in touch because they were unable to track
us.”

He has since completed quarantine and returned the devices to the Road Town Police Station as requested, he said. Other social media users reported similar problems.

Dushyant Savadia — founder of Amber Group, the Jamaicabased company that officials said would supply the tracking equipment — said he was not available for an interview by Beacon press time yesterday afternoon.

The transportation system shuttling arrivals to and from the testing sites also proved troublesome for some newcomers. Horizon Yacht Charters coowner Sylvia Driver reported that some of her guests’ holiday was  “potentially ruined” after they shared a taxi to the testing site with a guest from another company, who later was revealed to have tested positive.

“While Horizon’s clients had negative tests and were delighted to be able to go out to dinner and shop, the following day it transpired that one client sharing the cab with them had tested positive, so all clients were put into a mandatory nine-day quarantine,” Ms. Driver said.

They have since been released after further testing, but she is now urging government to avoid forcing quarantined visitors and residents to share taxis.

“While Horizon fully supports the government on their visitor protocols, they view taxi sharing as the weakest link in the process, and strongly urge the
government to review this procedure and only allow one group in each taxi, so that clients can maintain their ‘bubble,’” she said.

The Beacon attempted to reach Mr. Malone for comment on the taxi system and tracking technology, but did not receive a response.

On Tuesday, however, he acknowledged that work on the entry protocols is ongoing, and he urged compliance.

“If everyone will do their part, the transportation system is working, but it has to be improved,” he said in HOA. “In terms of making sure that when you collect persons from the airport, they are seen and handed over properly to the institutions or to the home of which they are to be contained: You cannot drop them at the bottom of the driveway, for them to take their own bags and walk.”

He added, “We have the particular apps. Yes, there are some areas to be improved, and will be improved.”

The main photograph on this article has been replaced to avoid any suggestion that the boat previously pictured was involved in the quarantine breach.