Entertainment > A massage for everyone

A massage for everyone

Lynette Ramoutar is nursing a sprained ankle and an inflamed tendon in her wrist. After the lawyer showed up for her 10th physiotherapy session at Therapy Works on a recent …

END_OF_DOCUMENT_TOKEN_TO_BE_REPLACED 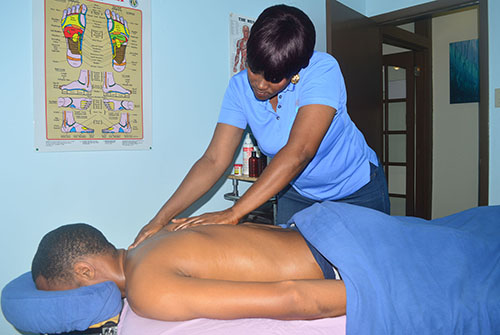 Teka Taylor massages a colleague at Journeys Health Spa on Friday. The Main Street business’s offerings include a massage for pregnant women and another designed to ease menstrual pains. These are among many specialty massages available in the territory. Photo: NGOVOU GYANG

Lynette Ramoutar is nursing a sprained ankle and an inflamed tendon in her wrist.

After the lawyer showed up for her 10th physiotherapy session at Therapy Works on a recent Monday, an assistant began wrapping the affected joints with heating pads in preparation for a brief massage.

She is not the only one to seek such treatment. Massages are a common form of therapy at the business, said owner Jerry Smith, who explained that Swedish and deep-tissue varieties are often used to treat sports injuries.

Such sessions are among many types of massage offered in the Virgin Islands for health, recovery and relaxation.

“Massage isn’t a luxury, but a necessity,” said Levi James, a massage therapist at Journeys Health Spa. “You have people sitting at desks typing with head down all day; people on their phones all day — all of that increases stress level.”
Among Journeys’ offerings are special massages for women, according to owner Doug Arter.

“Pre-natal massage is usually basic massage techniques to relax the muscular and nervous system,” Mr. Arter explained.
A session called a myofascial release helps ease tension caused by the changes a woman’s body undergoes during pregnancy, according to the massage therapist, who added that a similar massage can help relieve menstrual pains.

Other options come from the far East. Serenity Spa at Sopers Hole offers an oil-based massage called the Shirodhara, which focuses on the head.

“It’s good for relaxation, good for migraines, good for sleep issues, good for head and scalp health,” spa manager Monali Bhatewara said.
Originating from India, the method uses oils, buttermilk and other ingredients.
“It’s not only for beauty but for health purposes,” Ms. Bhatewara said, adding that apart from relaxing the muscles, the treatment also improves hair health and growth.
Amara Spa at The Moorings offers the Oriental Massage, which lasts for at least 70 minutes and uses aromatic herbal Indian oils, said manager Appu Ganesan.
Though it focuses largely on the head, the massage also involves foot reflexology, explained Mr. Ganesan, adding that it can improve immunity and flexibility.

Given so many choices, how should one decide?

“The ideal situation is to let the massage therapist feel or touch what is going on; then you go from there for your own good and satisfaction,” he said. “You have to marry fitness, water intake, flexibility, why you’re jacked up in the first place. … You can’t expect to get one massage for an hour and expect to be fit.”