Local News > A ‘rising of the phoenix’ at regatta

A ‘rising of the phoenix’ at regatta

Captain Jim Proctor only made it as far as Great Camanoe Island in the Round Tortola race Tuesday at the 47th annual BVI Spring Regatta and Sailing Festival, but considering …

END_OF_DOCUMENT_TOKEN_TO_BE_REPLACED 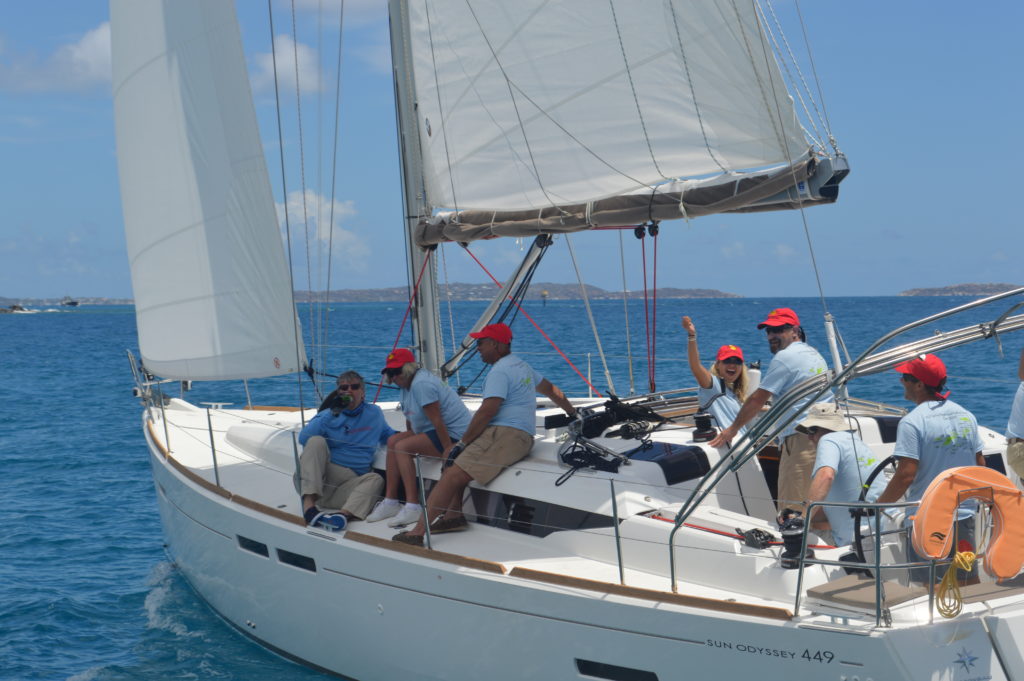 SpiritSail heads upwind during the Round Tortola race for the Nanny Cay Cup. Photo: CLAIRE SHEFCHIK

Captain Jim Proctor only made it as far as Great Camanoe Island in the Round Tortola race Tuesday at the 47th annual BVI Spring Regatta and Sailing Festival, but considering that six months ago his sailboat Blue Tide was partly sunk at Wickhams Cay II, that seemed like a victory in itself.

“This is the only boat I know of in the race that was actually in Tortola when the hurricane hit. We didn’t think it had a chance,” said Mr. Proctor, a lawyer from Birmingham, Alabama, who, along with two other teams made up of his friends and co-workers, has raced in the regatta’s bareboat class for the past five years.

At first, he thought his boat had been in Paraquita Bay for the storm.

“I saw the photos, and I assumed the worst,” he said.

Later, he found out it had been at The Moorings base instead, but it was still in rough shape.

“It was missing a mast, and we still don’t know everything else that was wrong with it: whether the keel was shot or whether there was damage to the hull or what,” he said.

After it was fished out of the water, Blue Tide took about three months to fix. Now, with freshly varnished decks and brand-new sails, it’s hard to tell anything happened.

Still, as the vessel pulled out of Nanny Cay, the crew was hesitant to get too excited about their chances in the Round Tortola race. Of the 43 boats competing, even most of those in the bareboat class (in which crews charter local boats), were shipped in from elsewhere and hadn’t seen the kind of damage that Blue Tide had.

“We aren’t expecting much this year,” Mr. Proctor said as he and his four-man crew prepared for the starting gun. “In fact, we’re expecting a good view of everybody else’s sterns.”

However, as they tacked upwind past Road Town and toward Beef Island, they remained in the middle of the pack. The wind was barely above one knot, and they knew, like many others, that they were unlikely to finish the race by the cutoff time of 3 p.m.

However, preparing for the awards ceremony back at the tents set up on Nanny Cay, director of racing Eddie Brockbank was all smiles for a different reason.

“We had 67 boats registered for the regatta as of today. Six months ago, we thought we would be lucky to get 30,” he said.

Last year, 86 boats were registered on day one.

Mr. Brockbank added that despite the light wind, the event was still a successful kick-off to the first-ever Absolut Full Moon Race, a 165-mile all-night epic journey past 67 islands that was undertaken by 16 of the Round Tortola competitors.

Regatta Director Judy Petz called the high number of regatta entries “the rising of the phoenix.”

“We’re even putting it on our t-shirts,” she said, adding that after Irma she had doubts that the regatta would even happen. “Immediately after [the hurricane], sailors … and international media contacted us and asked if the regatta would go on as planned. The past six months have been a challenge for everyone, … but I am convinced that we made the right decision to carry on.”

She credited the strong attendance to the enthusiasm of the event’s volunteers, sponsors and racers who return year after year.

More international than local teams are attending this year, she noted, including sailors from the United Kingdom, Canada, Belgium, Austria and the United States.

“They’re excited to be here,” she said. “They’re seeing people they haven’t seen for a long time.”

She added that the Regatta Village, which opens today, will be smaller this year and shifted slightly from its original location.

“We are making the best of it, so that’s challenging, but it will be a fun, new village that I think people are going to like,” Ms. Petz said.

Mr. Proctor knows a thing or two about rising like a phoenix. For the past few years, he has had a friendly competition going with his friends and coworkers, who fly down together and charter three boats in the bareboat class. But when he heard about Hurricane Irma and saw social-media photos of hundreds of damaged vessels, he thought it was unlikely he’d be racing this year even if he had a boat.

“I was exchanging e-mails with Judy Petz, and she said she was still deciding about whether or not to hold the regatta,” he said. “But we had already booked our boats, which you have to do nine months in advance, and I told her we’re coming down anyway. If the regatta doesn’t happen, we’ll just come down and make it a mission trip of sorts. We’d find a way to help out where we can.”

As the bareboat class struggled up the south side of the island, Mr. Proctor and his crew pointed out what had changed in the territory. Although they all shared sadness about the absence of landmarks like the Willy-T and the Bitter End Yacht Club, they said the true appeal of the VI still remains.

“The best thing about the BVI is all the options,” Mr. Proctor said. “After a race, you can just quickly motor over to another island, have a drink and relax. And there’s also the fact that everything is right here at Nanny Cay, and that we don’t have to keep moving around. We do [regattas in] Antigua and St. Maarten too, but in the past few years we’ve just formed a connection here.”

The rain started coming down in sheets while bareboats struggled into the docks, even as 16 other boats were heading back toward Norman Island and the rest of the course for the Full Moon Race.

In the end, just two boats finished the Round Tortola race. The catamaran WOW, a Stealth 14GT fresh off a victories in Antigua Sailing Week and the St. Maarten Heineken Regatta, was the first.

“It was an interesting race, to the say the least,” said WOW co-owner and skipper David Liddell of the UK.

He and co-owner Helen Ruud of Sweden had been to the regatta for “many, many, many years” and initially assumed they wouldn’t make it at all, but he said that he was surprised and pleased to find that “the whole marina has been rebuilt.”

That evening, he and his crew stood under a tent at the Nanny Cay beach bar, watching the rain and savouring the victory, knowing that the competition was about to get heated.

“Then, we’ll be competing against the real racers, the gunboats,” he said of today’s Spring Regatta launch. “We can only hope to keep up with them.”

Meanwhile, having thrown in the towel when the wind died again around 4:30 p.m., Mr. Proctor tried to make the best of it as he motored downwind from Great Camanoe. He’d gotten back just in time to beat the rain, and found out that his was the first boat in his class back at the dock.

“We won the race back to the bar,” he said with a laugh. “And in sailing that’s important too.”