In the Road Town park named for Queen Elizabeth II, who died last Thursday at age 96, government officials and other residents gathered on Friday afternoon to commemorate the late …

END_OF_DOCUMENT_TOKEN_TO_BE_REPLACED 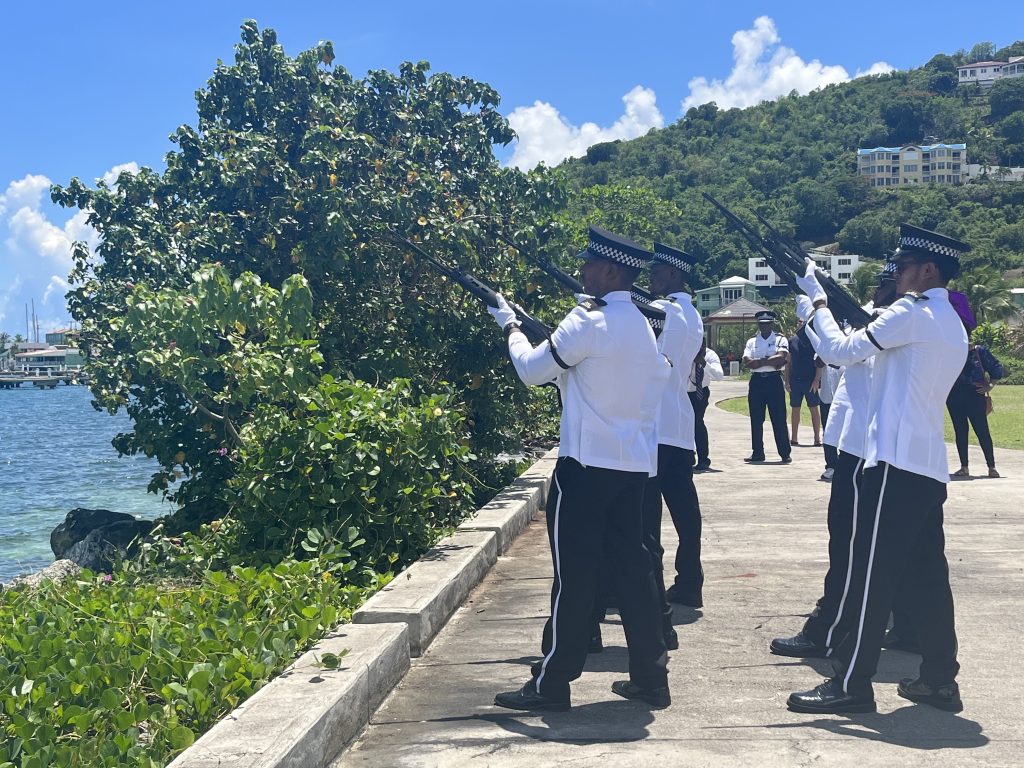 Police officers fire their guns on Friday during a salute to honour the monarch, who died last Thursday in Scotland at age 96 after 70 years on the throne. (Photo: ZARRIN TASNIM AHMED)

In the Road Town park named for Queen Elizabeth II, who died last Thursday at age 96, government officials and other residents gathered on Friday afternoon to commemorate the late monarch and her record-setting 70-year reign.

Squinting under the hot September sun, attendees watched as eight police officers presented a gun salute, each firing a dozen shots to mark the number of years the Queen lived until her death last Thursday at Balmoral Castle in Scotland.

Mr. Rankin noted that the Queen, who ascended to the throne in 1952 at age 27, was the longest-serving British monarch in history.

“For most of us, she has been a constant in our lives,” he said. “Long did she, indeed, reign over us.”

He added that the Queen “remained steadfast” throughout her reign, serving with “dignity, decency, grace and dedication.”

The premier reflected on the Queen’s accomplishments and recalled her two visits to the Virgin Islands.

“Her Majesty stepped into her role and owned it with confidence for every moment of the last 70 years since — ruling through international social, political and technological revolutions and many periods of challenge and triumph,” Dr. Wheatley said. “Virgin Islanders and residents who are old enough will remember Her Majesty’s two visits to the Virgin Islands. First in 1966, Her Majesty was accompanied by her husband, His Royal Highness Prince Philip, Duke of Edin- burgh; then again in 1977, when my grandfather, Chief Minister Dr. Willard Wheatley, had the honour of hosting her here in the territory.”

He added that the Queen “leaves a legacy” and that the VI “joins the world in mourning” her.

While representing her father during a 1952 tour, she and her husband received news of her father’s death while in Kenya. The couple flew back to England, and her coronation was held in 1953. Her long reign encompassed many landmark events in global history, including the moon landing, the Cold War, the advent of the internet, Brexit, and the independence of more than 20 countries that were once part of Britain’s overseas “empire.”

The Queen also greeted 15 British prime ministers, starting with Sir Winston Churchill and ending with Liz Truss, who she officially invited to assume the role just two days before her death last week. In June, Britain celebrated the Queen’s 70 years on the throne with the “Platinum Jubilee,” a four-day national holiday. An observance held in the VI the same month included a parade through Road Town.

The Queen was preceded in death by her husband Prince Philip, who died in April 2021.

On Saturday at St. James’s Palace in London, the Queen’s eldest son was officially proclaimed King Charles III and head of the Commonwealth, an association of 56 independent countries and 2.4 billion people. His coronation date has not yet been announced.

Here in the VI, another ceremony was held at Government House on Sunday afternoon, where Mr. Rankin proclaimed allegiance to the King before another gun salute.

Dr. Wheatley, who is currently in the Cayman Islands for business meetings hosted by the Caribbean Tourism Organisation, plans to travel to London for the Queen’s funeral on Monday in Westminster Abbey. The same day, the territory will observe a special public holiday in honour of the funeral.

Meanwhile, at the Gover- nor’s Office and Government House, the Union Flag has been raised to half-mast each day and will remain at half-mast until Tuesday.

Other government offices are expected to do the same “as a mark of respect,” the Governor’s Office noted in a press release last Thursday.

The book will remain open until Monday.

A virtual condolence book is also available online at www.royal.uk.

According to the Governor’s Office, Buckingham Palace discouraged the sending of wreaths or flowers in the Queen’s honour, instead urging people to donate to a charity.