After Irma, Culture Week carries on

Coal pots, bedpans, washboards, kerosene lamps and paper flycatchers may seem like relics of the past, but as the 23rd annual Culture Week runs in the wake of Hurricane Irma, …

END_OF_DOCUMENT_TOKEN_TO_BE_REPLACED 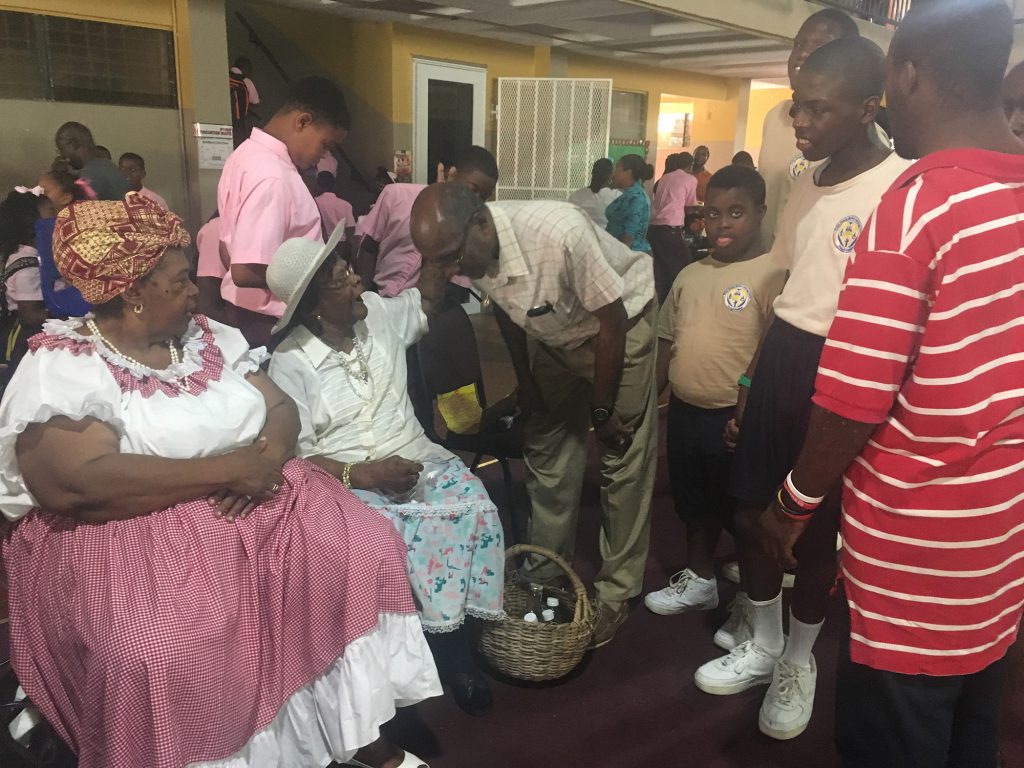 Coal pots, bedpans, washboards, kerosene lamps and paper flycatchers may seem like relics of the past, but as the 23rd annual Culture Week runs in the wake of Hurricane Irma, these traditional items may be looking a lot more familiar to schoolchildren throughout the territory.

At Elmore Stoutt High School, Pastoral Principal Donna Clyne, along with Administrative Officer Tracy Christopher and historian Ellen Blyden-Beverhoudt, worked to put together a museum-style display full of historical artefacts, including everything from wooden fishhooks to “coal goose” clothes irons to butterfly pins made of whitefish bones.

“The kids have been loving it,” said Ms. Clyne, demonstrating plucking the strings of a banjo handmade from a sardine can. “They saw the games: the jacks and catapults and stone marbles. They were taking pictures of them with their phones, asking me, ‘They really played with these?’ They’re used to video games.”

Director of Culture Luce Hodge-Smith explained that for children living in a post-Irma world, the old-fashioned ways of living and working are no longer strictly confined to history books.

“We have been going to schools and asking students, ‘What have you been seeing your parents doing? Have you been helping wash clothes?’” she said in an interview on ZBVI’s Umoja programme. “Just recently at Baughers Bay, I saw a mother at the ghut washing with two children with her.”

According to Ms. Hodge-Smith, Culture Week is a chance to reflect and raise awareness of the cultural heritage of the Virgin Islands. This year, organisers were particularly keen to draw a connection between the hardships of post-Irma life and the similar hardships early residents faced in order to build the territory into what it is today.

Ms. Clyne explained that Culture Week at ESHS typically includes a Friday fungi music festival, a traditional food fair and live demonstrations of crafts, but due to Irma organisers had to scale back considerably.

The 2017 theme, “Reflections of Our Virgin Islands Culture: Then and Now,” with the sub-theme, “Living the Culture,” was chosen before Irma, but organisers said it ended up fitting perfectly.

“Our present situation affords us the opportunity to highlight and emphasise the examples of how our culture has evolved over the years,” Education and Culture Minister Myron Walwyn said in a statement. “Finally, it gives us, the older folks, the chance to explain our traditions and the way of life of long ago, and it gives the younger generation the opportunity to see and live firsthand how our foreparents lived in years past, as we have had to revert to many of those things.”

This week, cultural demonstrations and displays continued in primary schools and the VI School of Technical Studies. A Territorial Dress-up Day will cap off the week tomorrow, and a storytelling series by retired educator and legislator Elmore Stoutt, which has been airing this week on ZBVI Almanac, will wrap up today.

“I’m from the Sea Cows Bay community, and what I realised is that a lot of our senior citizens are passing and we are not retaining that information,” said Althea Scatliffe Primary School Assistant Principal Kayron Todman, who coordinated the school events, in explaining the importance of the oral tradition.

“They have it all in their heads; when they’re gone, that information is gone,” added Ms. Hodge-Smith.

Mr. Walwyn urged students to contribute to the tradition by writing and sharing their own Irma experiences for posterity.

Mr. Todman said that it’s not only the ways of the past, but the values of the past that need to be preserved. “The VI has become too Americanised, and some of the values have been lost,” he said. “As an educator it is my responsibility to enforce some of those values.”

In describing bowls carved of calabash and baskets woven of so-called “whooping tree” branches, he praised the ingenuity of those who had little.

“They used what was in their environment to survive and to thrive,” Mr. Todman said. “We could learn a lot from them.”