After surgery, a turtle swims home

At the end of a quiet fuel dock in Nanny Cay on Sept. 9, a green turtle was swimming lazy laps around a circular blue tank, making a loud blowing …

END_OF_DOCUMENT_TOKEN_TO_BE_REPLACED 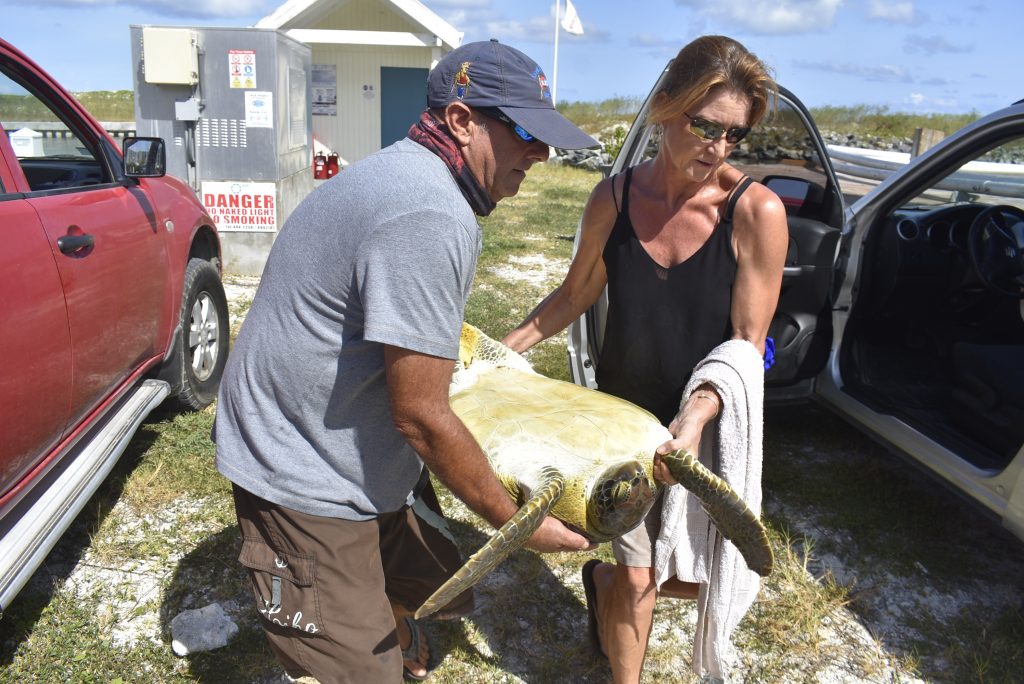 After having its tumours surgically removed, a green turtle is rushed from a tank at Nanny Cay to a car on Sept. 9 before being released back to sea. (Photo: JOEY WALDINGER)

At the end of a quiet fuel dock in Nanny Cay on Sept. 9, a green turtle was swimming lazy laps around a circular blue tank, making a loud blowing sound whenever he came up for air.

The turtle had been captured on Aug. 25 with splotchy, cauliflower-shaped tumours sprouting from the corner of his eyelids, encircling one of his fins, and dotting other parts of his body — the result of a mysterious disease called fibropapillomatosis.

There is only a nascent field of research around the disease, but scientists know that it can prove fatal, as tumours near a turtle’s eyes can blind it, while a tumour in its throat can preclude swallowing, said biologist Dr. Shannon Gore.

But after having his tumours surgically removed two weeks before, the turtle’s future looked rosy, said Dr. Gore, the managing director of the Association of Reef Keepers.

“The tumours that were in the eyes … weren’t super big, but they would have eventually grown over and [the turtle] wouldn’t have been able to see to feed,” she said.

After only two weeks in captivity, the turtle had healed well but his morale appeared to be low, as he was eating so little that his shell had become somewhat concave, Dr. Gore explained.

She consulted with a veterinarian in Grenada and decided it was time for him to go home.

The turtle’s road home began at Canines, Cats & Critters BVI, where he underwent a type of surgery practised nowhere else in the Caribbean, according to veterinarian Dr. Adam Burch.

To carry out the operation, Dr. Burch used a laser purchased with funds raised by ARK, which he said will significantly enhance the efficacy of his practice.

“It will allow us to do more complicated surgeries and to do surgeries with a lot more care and precision,” he said.

When using the laser, Dr. Burch and his colleagues can adjust the intensity of the beam depending on the toughness of an animal’s tissue, thereby minimising bleeding during the operation, he said.

This is especially helpful when working on turtles, which tend to bleed profusely when surgeons use traditional tools, Dr. Burch explained.

During the operation, he turned the laser to a high frequency in order to cleanly slice through and cauterise the tough tissue without charring the skin, he said.

Back to the sea

After the turtle spent almost two weeks rehabilitating in the saltwater tank on Nanny Cay, Dr. Gore and a friend on Sept. 9 hoisted it from the tank and rushed it to the trunk of her car, where it was laid on a makeshift bed.

She drove the turtle to a dock near Beef Island and loaded it onto a speedboat captained by a friend, who set off for the area south of Virgin Gorda where it was initially found.

Once the boat came to a stop, Dr. Gore and videographer Alton Bertie lowered the turtle into the water, lightly splashed its beak, and slowly let go.

With a splash, the turtle kicked off into the sea, quickly disappearing beneath the blue surface.

The turtle was found during a tagging mission that is part of a larger effort to build a national sea turtle database in the Virgin Islands and ultimately update the current fisheries legislation, Dr. Gore said.

While she had long been compiling data about the territory’s underwater life, this effort was galvanised in October 2020 when ARK partnered with the United Kingdom Marine Conservation Society and the University of Exeter as part of a $300,000 grant from the Darwin Initiative, a United Kingdom programme that funds biodiversity protection in developing countries.

As part of the three-year effort — dubbed the Sustaining Turtles, Environment, Economies, and Livelihood Project — Dr. Gore is aiming to visit six to eight turtle hotspots at least twice a year in order to study the animals that live there, and take aerial surveys of turtle tracks in some of the VI’s more remote areas, according to the ARK website.

Scientists in the Department of Agriculture and Fisheries, meanwhile, will conduct tests on turtles harvested during the hunting season, which runs from Dec. 1 through March 31.

But doing the science is only half of the equation.

In November, UK researchers will travel to the VI to try and ease this tension, Dr. Gore said last Thursday.

Using the “community voice method,” the researchers will videotape interviews with a wide cross section of stakeholders about how they think the turtle fishery should best be managed.

The questions will be tailored to each interviewee, and the videos will be stitched together to make a documentary that organisers hope will provide a consensus on how to move forward, Dr. Gore said last Thursday.

“You cannot put two opposing groups together in a room and think that things are going to be all cheery,” she said.

Once the film is finished and presented to the public, Dr. Gore hopes it will create a “non-threatening environment to listen to each other,” she said.

When it comes to fibropapillomatosis, much is unknown, said Dr. Gore.

Although the disease is triggered by a herpes virus, scientists do not know how that virus originated or how it spreads, Dr. Gore said.

Two of the most widely accepted theories, according to Dr. Burch, are that it is spread by leeches that suck blood from turtles, or that it clings to turtle tissue or debris that floats in the water.

Just as scientists have struggled to explain the disease’s proliferation, they have yet to find a treatment that is more effective than surgical removal of the tumours, said Dr. Gore.

In a February report, the United States National Oceanic and Atmospheric Administration noted that it does not have “a strategy to reduce or eliminate [fibropapillomatosis] from sea turtle populations.”

The disease is not concentrated in one part of the world, as outbreaks have been recorded sporadically in areas as far apart as Hawaii, Puerto Rico and Florida since the 1980s, Dr. Gore told the Beacon last year.

Though there is not enough research to be entirely sure, Dr. Gore now suspects that it is a growing problem in the Virgin Islands.

The first three VI cases were all reported in 1996, but the next suspected case was not recorded until 2018, and since then there have been at least three sightings of infected turtles, she said.

While Dr. Gore does not know for certain that storms have any impact on the disease’s spread, she said “it’s interesting” that all the recent cases in the VI occurred after the devastating hurricanes of 2017.

In Australia, she added, cases have increased after cyclones.

And does she think the disease might be the result of human activity?

“Chances are most likely, like with everything else,” Dr. Gore said.