During a Sept. 28 hearing, the Commission of Inquiry read from a document recounting a 2019 Cabinet meeting in which members considered granting belongership to a rapist imprisoned in the …

END_OF_DOCUMENT_TOKEN_TO_BE_REPLACED 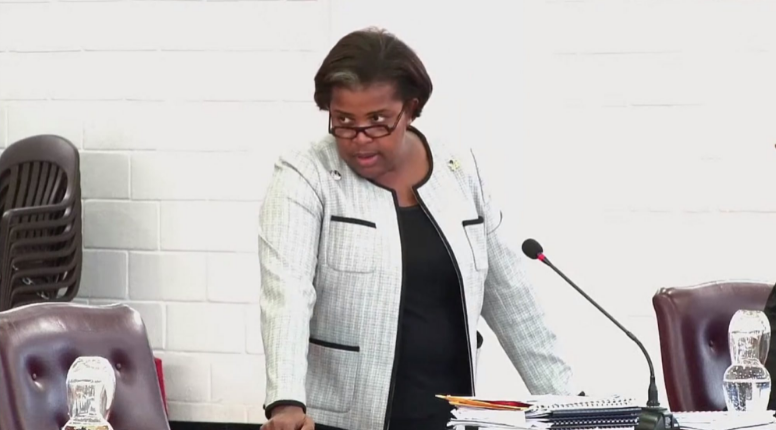 During a hearing on Sept. 28, the Commission of Inquiry asked Natural Resources, Labour, and Immigration Minister Vincent Wheatley why Cabinet had considered granting belongership to two prison inmates, including a rapist convicted in the United States. After this question generated controversy in the media, Attorney General Dawn Smith, shown above in an unrelated House of Assembly meeting, blasted the COI’s line of questioning. (File Screenshot: HOA)

During a Sept. 28 hearing, the Commission of Inquiry read from a document recounting a 2019 Cabinet meeting in which members considered granting belongership to a rapist imprisoned in the United States.

Within hours, residents were airing their outrage on social media forums.

But in a public letter to Commissioner of Inquiry Sir Gary Hickinbottom last Thursday, Attorney General Dawn Smith blasted the COI for its handling of the hearing, claiming that it disclosed the contents of a confidential minute without receiving Cabinet’s consent; did not sufficiently warn the witness or other VI officials that they would ask about the minute; and posed the question in a misleading manner that could unfairly embitter the public’s perception of the government.

The COI’s disclosure “could hardly have done more damage to public perception of government as a whole if it had been calculated to do so,” Ms. Smith wrote.

“Furthermore, these revelations have prejudiced the rights to privacy and administrative fairness of the individuals and victims concerned, which should have been the predictable conclusion of any responsible reflection on this matter.”

On Tuesday, COI Secretary Steven Chandler issued a press release stating that Sir Gary sent the AG a response to her letter the day he received it, but offered few other details.

Although Sir Gary had written to Ms. Smith to ask for more information “about relevant matters” before she published the letter last Thursday, she has asked for more time to respond, Mr. Chandler wrote

Given that these matters may be the subject of further evidence in due course, the commissioner does not consider it would be appropriate to publish his correspondence with the attorney general, at least at this stage in the COI’s proceedings,” Mr. Chandler wrote.

He added, “As always, [Sir Gary] is anxious to maintain the integrity of evidence, and procedural fairness for all.”

Ms. Smith did not respond to questions from the Beacon about her letter.

The controversial question arose during the final stretch of a full day of hearings, and was posed to Natural Resources, Labour and Immigration Minister Vincent Wheatley.

Although it was not explicitly framed as a criticism, as Ms. Smith seemingly contends, the COI asked Mr. Wheatley whether the convicted rapist and another convicted criminal were granted belonger status, and why those individuals were considered for belonger status at all.

According to the minute read by COI Counsel Bilal Rawat — which he called a “memo” — Cabinet, after being cautioned by acting Governor Rosalie Adams to protect the territory from becoming a “dumping ground for persons who did not behave in a good manner while overseas,” decided to defer the convicted rapist’s application for three weeks.

In response to questions from Mr. Rawat, Mr. Wheatley told the COI that he did not remember if either individual was eventually granted belongership, and he added that they were considered out of a “humanitarian” impulse to provide relief to their families.

A press release accompanying Ms. Smith’s letter calls into question the accuracy of the COI’s query, alleging that one of the individuals under discussion was granted status “long ago,” and was convicted of a serious offence subsequent to becoming a belonger, a detail not presented during the hearing.

But Ms. Smith’s letter appears to contradict the assertion that one of the referenced individuals was granted belonger status.

Although Cabinet members have made some of their confidential documents public at various times during the hearings, Cabinet did not give such consent for the minute referenced on Sept. 28, Ms. Smith alleged.

Neither Sir Gary nor Solicitor General Jo-Ann Williams-Roberts, who also attended the hearing, was made sufficiently aware that Cabinet had not withdrawn its privilege over the document, Ms. Smith alleged.

Additionally, Ms. Williams-Roberts was never given the opportunity to make submissions on whether the disclosure’s potential public interest outweighed Cabinet confidentiality — or even provided with a copy of the minute, Ms. Smith alleged.

“I would be most grateful if you would confirm whether a decision was made to use the confidential minute at a public hearing without first discussing it with the [Inquiry Response Unit], or whether the unauthorised use was accidental,” Ms. Smith wrote, adding, “I would also be grateful for your assurance that the COI team will not use Cabinet papers at public hearings or otherwise make them public without prior notice to me.”

Ms. Smith also complained that Mr. Wheatley had not been warned that he would be questioned about the minute, nor had it been included in his bundle prepared ahead of the hearing or handed to him before the meeting began.

While the COI had requested a full copy of the minute on Sept. 17, it had not indicated its intention to use the minute during a public hearing, Ms. Smith claimed.

Given that Mr. Wheatley’s hearing started an hour late, he could, at the very least, have been provided with a copy while waiting for his testimony to begin, or he could have been recalled on a different day, as the COI has done with other witnesses, Ms. Smith wrote.

Beyond not supplying the minister with a copy of the minute before his hearing, Ms. Smith also alleged that the “criticisms were put to the minister in relation to the minute without having been included in his warning letter.”

However, the COI did not frame the line of questioning pertaining to the minute as a criticism. The “potential criticism” that the COI did put to the minister was that by adhering to the policy of only considering belongership applications of individuals who have resided in the territory for at least 20 years, the Immigration Department “has acted unlawfully” or “outside” the Immigration and Passport Act 2013.

Though Mr. Wheatley did not directly refute this claim, he said the department is working to create an overarching immigration policy that will establish parameters for the belongership process, such as how many people could be granted status over a certain period of time.

In her letter, Ms. Smith also took issue with the tone of the COI staff during the line of questioning, writing that it was “prosecutorial and accusatory.”

She also claimed that questions were sometimes phrased in an inappropriate manner, such as when the COI asked, “How is it that you cannot remember if you granted a rapist belonger status or not?”

Ms. Smith added, “Even allowing for a degree of forensic enthusiasm, this was unfair in the circumstances since the minister had not been given the opportunity to remind himself of the facts and would obviously not want to provide evidence to the inquiry that he had not verified, particularly on such a sensitive matter.”

‘Harms to the public interest’

Because Mr. Wheatley was not forewarned that this confidential minute would be referenced at the hearing, he was not given the opportunity to remind himself that the individuals were either not granted belonger status or had not been under consideration for belongership at the time, Ms. Smith stated.

“This means that a false impression has been created (as can be seen in social media posts on this subject) that these persons have indeed been granted belonger status by the current government,” Ms. Smith wrote.

Ms. Smith added that this “misleading impression” is “damaging to the public interest.”

To be sure, the Sept. 28 hearing sparked a swift and impassioned reaction online.

One post, which expressed outrage at claims that a convicted rapist in the US could be considered for belonger status when decades-long residents of the territory are routinely passed over, was shared at least 36 times and received 113 reactions and dozens of angry comments.