The BVI Airports Authority development fund has been tapped for various uses in recent years, including multiple consultancies costing hundreds of thousands of dollars as well as investments in equipment …

END_OF_DOCUMENT_TOKEN_TO_BE_REPLACED 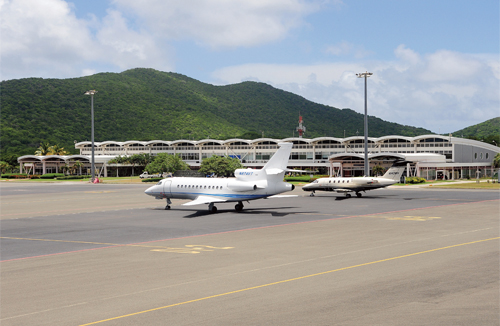 The BVI Airports Authority development fund has been tapped for various uses in recent years, including multiple consultancies costing hundreds of thousands of dollars as well as investments in equipment and construction, Premier Andrew Fahie said on Aug. 16 in the House of Assembly. (File photo: TODD VANSICKLE)

The BVI Airports Authority development fund has been tapped for various uses in recent years, including multiple consultancies costing hundreds of thousands of dollars as well as investments in equipment and construction, Premier Andrew Fahie said Aug. 16 in the House of Assembly.

He was responding to questions from opposition member Julian Fraser, who asked how much money the BVIAA has raised from the $20 fee it imposes on passengers, and exactly what the money has been supporting.

Mr. Fahie reviewed the development fund annual balance since its establishment in 2012, which fluctuated dramatically year by year. 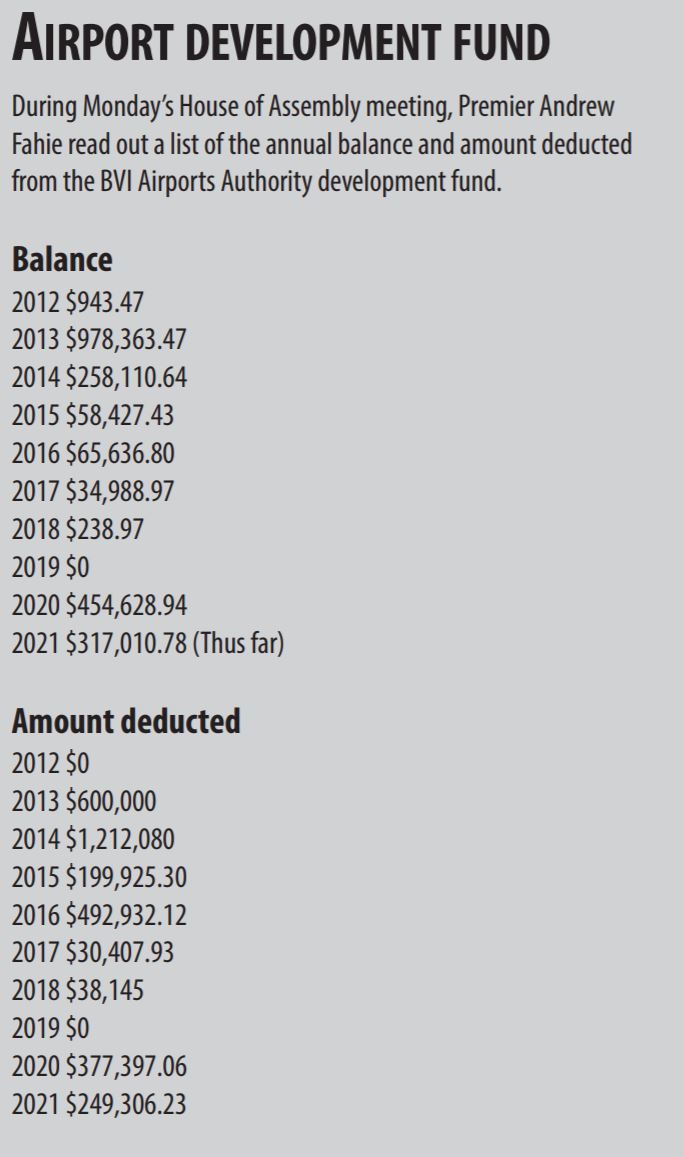 Mr. Fahie provided Mr. Fraser with a list of how the money from the fund was used each year. Expenditures, he said, funded projects including fire trucks, consultancy contracts, salary payments, a walk-through metal detector deposit, a deposit for welcome centre construction and an enclosed arrival area, a survey of Taddy Bay International Airport on Virgin Gorda, a business plan for capital investment, and a consultancy for building a new runway at the Beef Island airport.

This year, he noted, the major expenditures went toward a second payment on the business plan; work on the arrival area; security measures provided by the Jamaica-based Amber Group to address Covid-19; renovating the arrival area; new tiling, windows and doors at the BVIAA administration building; forensic audit services; installing new lighting; and more.

After reviewing the list, Mr. Fraser responded, “The operative word here is ‘development.’ I was there at the time this fund was established. There was some reluctance to do it because it was a tax being added to the traveling public. But it was for a good cause, which was development.”

He questioned how some of the purchases furthered that goal, and he asked the premier if government would consider directly funding certain operational expenditures necessary for the BVIAA to function rather than withdrawing money from the development fund.

“At a glance, that would seem like the most feasible thing to do,” Mr. Fahie said. “But what I was trying to explain was that the deficit received did not just start in 2019.”

He noted that the fund deficit has fluctuated over the years, and given the financial challenges of responding to the 2017 hurricanes and the pandemic, he said more money went toward just “keeping the lights on” at the airport.

That situation, he added, makes it even harder to pursue larger development projects like the proposed runway expansion at Beef Island.

“I would say to you, member from the Third, that you are correct that it would be the best thing to do, but central government does have some challenges financially in terms of high demands and limited resources,” Mr. Fahie said. “We continue to survive, but we have to recognise that it’s not business as usual. The airport can eventually, as the numbers show, pay for itself with some expansion.”

But until the runway expansion is realised, costs will have to be covered by both central government and the development fund, he added.

“The truth of the matter is that all reports show that if you do not expand the airport and leave it as is, there’s a chance that you will not have an airport anymore,” the premier said, though he didn’t offer more detail about the timeline depicted in such reports. “Doing nothing right now is not an option.”

Details of a feasible plan for the expansion will be announced soon, the premier promised, saying he hopes Mr. Fraser’s concerns will be addressed then.

Mr. Fraser pressed for an answer as to whether money used for purposes other than development would be returned to the fund. The premier said most of the non-development expenditures happened out of necessity after the hurricanes, and government subsidies for the airports likely already exceeded those expenditures.

Now that air travel is picking up again — he said July set a new record of arrivals since the border reopening, with 7,208 visitors — new income should ease the financial burden on central government and stabilise the BVIAA’s finances, he added.

Opposition Leader Marlon Penn also asked on Aug. 12 for the total revenue and expenditure for the BVIAA for 2018 to 2021.

Mr. Penn asked if these losses were covered by reserve funds or supplementary funds from the Ministry of Finance, and the premier said he would have to come back with an answer.

“It must be noted that the new board of directors took up their assignments in May 2019,” the premier added. “Therefore, they would have met a number of unpaid bills to contractors and individuals.”

Mr. Fahie also noted that the pandemic forced the airport to close from March 2020 to June 2020, only fully reopening to all passengers in December 2020.

“The BVI Airports Authority is faced with the challenges of maintaining a suitable revenue stream to keep them afloat,” he said. “We are not out of the woods yet, but efforts are being made to keep our airports operational.”

In response to another question, Mr. Fahie declined to provide a list containing individual vendors’ names, arguing that doing so would violate HOA Standing Order 17.1b, which states, “A question shall not include the names of persons, or any statement of fact, unless they be necessary to render the question intelligible.”

Mr. Penn asked for clarity from Speaker of the House Julian Willock about why it could be a violation of the Standing Orders to provide the information, and Mr. Willock said he stood by the premier’s decision based on the collective decision made by the House on similar issues regarding people’s names.

He did, however, say he would consult the attorney general about disclosing company names in the House.