Local News > All Hands on deck

All Hands on deck

At what’s left of the gymnasium next to Joyce Samuel Primary School in Belle Vue, All Hands and Hearts volunteers in purple shirts and hard hats diligently tore up planks …

END_OF_DOCUMENT_TOKEN_TO_BE_REPLACED 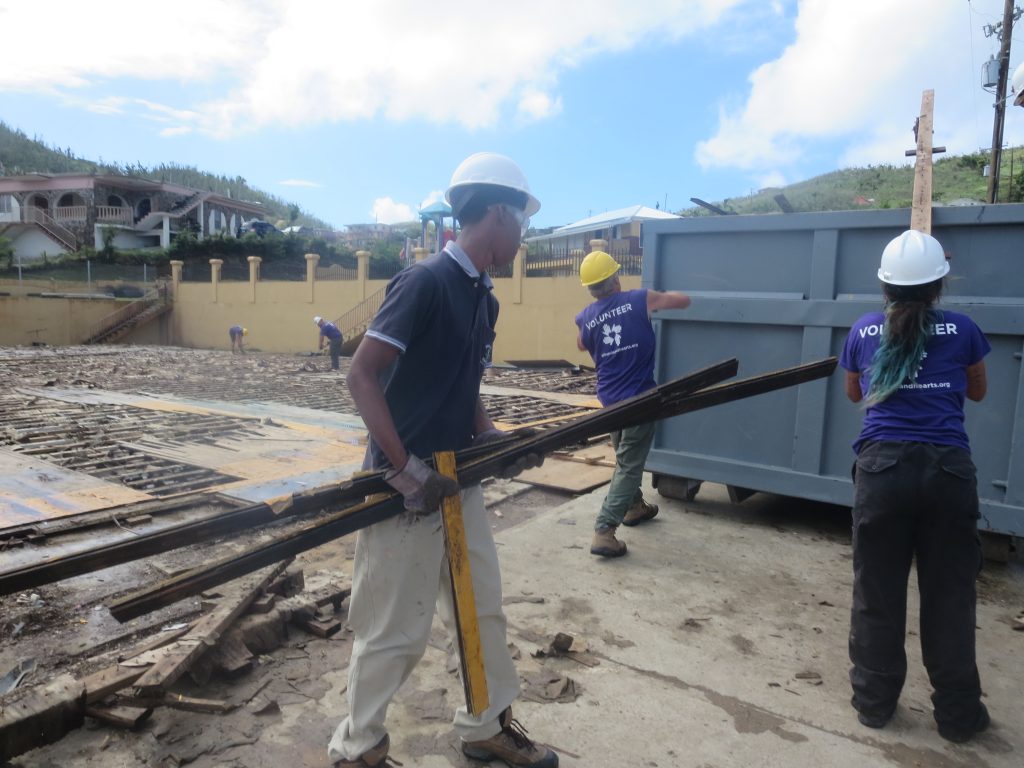 Volunteers from All Hands and Hearts clean rubble from the site of the destroyed Belle Vue gym.

At what’s left of the gymnasium next to Joyce Samuel Primary School in Belle Vue, All Hands and Hearts volunteers in purple shirts and hard hats diligently tore up planks of rotting wood, tossing them into an already overflowing rubbish container.

“This is the 11th Dumpster we’ve filled so far. Oh, that reminds me: We need another one,” said Australian project manager Mitch Lederman, whipping out his phone to call for a replacement.

Mr. Lederman then led the way down the hill to a different part of the gym, where sheets of galvanised roofing lay in a mangled heap with other garbage left there since Hurricane Irma.

It was hard to believe, but they planned to be finished by Tuesday, with the crushed bleachers next to the gym also still needing to be either hauled out or somehow salvaged. The gym won’t have a roof anymore, but either way, by the time they’re finished, the shards of wood and jagged metal will be gone.

“There’s actually a nice concrete floor underneath,” Mr. Lederman said. “We might just leave it until someone can come to paint it.”

“We call this the ninja crew,” she said, pointing to their team of seven volunteers, freshly split off a group of about 70 working in St. Thomas. “We’re trying to get it to the phase where everyone can play safely and people aren’t using it as a community trash pit.”

Founded by former United States tech executive David Campbell after the 2004 Asian tsunami, All Hands and Hearts merged this year with another organisation founded by supermodel Petra Nemcova.

Together the groups have dispatched 40,000 volunteers in 10 countries, including Nepal, Haiti and the Philippines, rebuilding 171 schools in all.

Ms. Wood said they’ve been able to succeed as one of the few organisations not charging money of volunteers.

“They have to get themselves here, but then we provide food and accommodation,” she explained.

The “ninja crew” alone includes volunteers from the UK, Australia, the Netherlands and Colombia. In St. Thomas, they slept on the floor of a church when they weren’t busy ripping out mouldy drywall so homeowners can make repairs.

Here, schools will be their focus, thanks to a $2.5 million grant from Norwegian Cruise Lines, focused on rebuilding educational institutions.

“Once the programme scales up, we’ll be looking more into projects to help in the schools and things,” Ms. Wood said. “If we find the right projects here we can be here as long as possible.”

Since their arrival, they’ve already racked up a list of accomplishments, starting out by helping out at Willard Wheatley, Ebenezer Thomas and Alexandrina Maduro primary schools, as well as multiple child care centres, focusing on drainage, fence repairs and security.

Once they finish in Belle Vue, it’s on to the higher grade levels: They’ll be pulling out windows and clearing out the Elmore Stoutt High School building.

Ms. Wood said they will focus on “just making it a place where the government can just go in and say, ‘We just need windows and electricity.’ It saves them cost and time while they’re waiting on their funds.”

The group has brought in skilled metal workers to fix the perimetre fences at many of the schools, using a database of over 900 people provided by OneLove BVI.

Meanwhile, plans are in the works to engage the local community by working with H. Lavity Stoutt Community College and the people in the training programmes there, “so we can integrate them and train them on the job,” Ms. Wood said.

The “ninja crew” is camping out, literally, at Nanny Cay, thanks to ShelterBoxes donated by Rotary International.

Still, compared to other countries and territories they’ve visited, including the United States Virgin Islands, the volunteers say this is paradise.

“Living in Nanny Cay is the lushest base we’ve ever had,” Ms. Wood said. “It’s really sweet, because everyone says, ‘Look at these volunteers: They’re going through hell, living in tents and on grass,’ and we’re like, ‘This is great!’”

They’re enjoying the luxury of having a refrigerator and groceries nearby, and using a damaged hotel room to store their extra gear.

Next month, though, they’ll be moving on to the Gertrude and Christiana Warner Community Centre in Purcell Estate.

Ms. Wood acknowledged that there have been challenges unique to the VI. A photo of a group of All Hands volunteers sitting idly outside the Immigration Department raised eyebrows when a resident posted it on Facebook.

“That’s the first time we’ve had that problem,” admitted Ms. Wood. “Granted, in places like Nepal and Haiti, they are more used to having NGOs coming in.”

Fortunately, Ms. Wood referred to “some friends in high places” who are helping them sort out the situation.

“He just rocked up and said thanks after seeing the purple shirts,” Ms. Wood said.

His wife Millie Jaspert arrived to help on Friday, and a group of charter boat guests will be joining later this week.

All told, the volunteers have been very well received, according to the organiser.

“People have stopped and thanked us for helping [at their child’s] school,” she said. “Taxi drivers will not take money off you. We’ve tried to buy supplies and they’ve said, ‘No, this is our contribution.’”

Within minutes of his arrival, he was strapping on a hard hat.

“I have kids that work for me who have community service requirements for schools,” said Mr. Mittelholzer, who saw the group advertising for local volunteers on Facebook. “So when we have a day off, I try to get them up here to help.”