As the election campaigns moved in to the final stretch in the past week, the Virgin Islands Party hosted a series of events that had less to do with politics …

END_OF_DOCUMENT_TOKEN_TO_BE_REPLACED 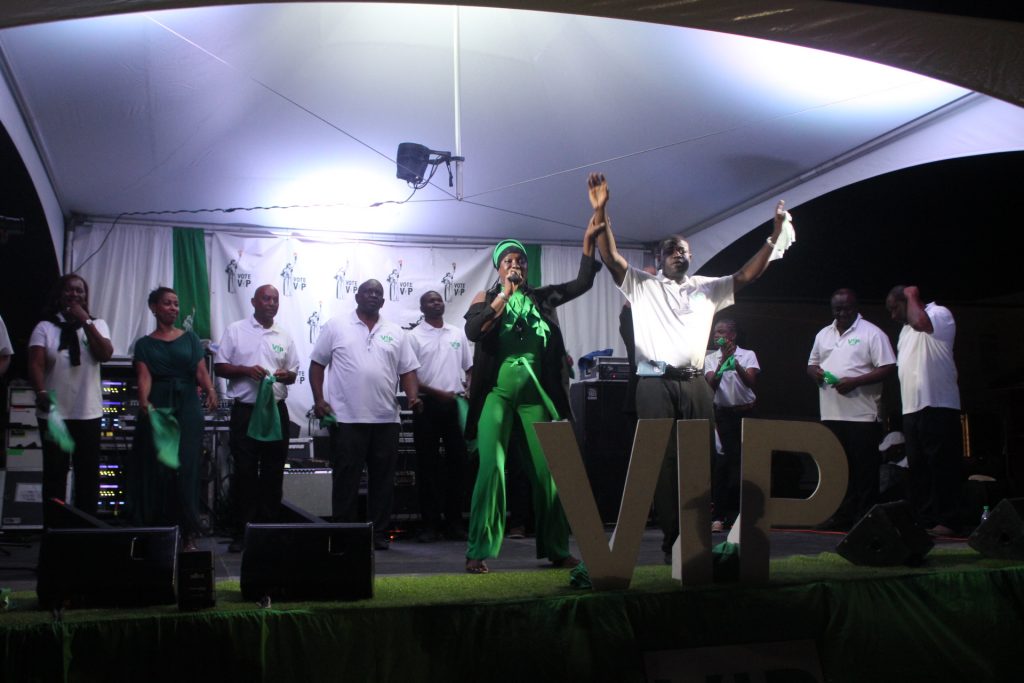 The Virgin Islands Party district candidates took to the stage during a youth rally on Friday night in Road Town, each dancing and waving.

As the election campaigns moved in to the final stretch in the past week, the Virgin Islands Party hosted a series of events that had less to do with politics than with having fun: a “Nomination Day walk around” last Thursday, a youth rally and concert on Friday, and a gospel fest on Sunday.

On Tuesday, however, the party got back down to business, launching its manifesto during a press conference at Village Cay Marina.

A “15-Point Glance” summarising the manifesto lists “short-term priorities,” including the creation of two new government agencies: a Ministry of Tourism, Transportation and the Environment; and a Public Debt Management Unit within the Ministry of Finance.

At the launch, the “15-Point Glance” was divided into three categories.

The first discussion, which was dedicated to youth issues, was headed by at-large candidate Sharie de Castro, who at 28 is the youngest person running for office this year.

“We are proposing that as a territory we need to be re-active and take proactive measures in education, information technology, and sports,” Ms. de Castro said.

She added that the party decided to focus on these three areas after listening to residents’ feedback.

In the area of education, Ms. de Castro said the party’s first order of business is improving the quality of education by auditing the teaching force and current educational requirements in order to make changes that reflect global standards, as well as modernising courses for educators at the H. Lavity Stoutt Community College. The VIP also plans to refurbish all pre-primary, primary and secondary schools, she said.

To improve information technology, the party promised to upgrade high-speed networks within six to 12 months by meeting with stakeholders involved, according to the candidate.

The party also hopes to produce more local athletes and create a thriving sports tourism industry by rebuilding facilities, providing resources for training, and working alongside FIFA to establish year-round activities for the youth, she added.

The next segment of the launch, “Economy and Build- ing Prosperity,” was led by at- large candidates Carvin Malone and Shereen Flax-Charles, who began with a focus on five areas: small business and job creation, the financial services sector, agriculture and fishing, renewable energy, and infrastructure.

The party plans to establish various committees to support small businesses and to revise labour legislation. To attract foreign and local investors, the VIP promises to consider cryptocurrency and blockchain technology.

A nine-step programme for agriculture and fishing includes plans to re-establish the Paraquita Bay agricultural station and create a modern market in Road Town.

Renewable energy ideas included no specific plans, but Mr. Malone said the party will “form the right relationships with the right people” to bring the needed technology to the territory.

Under infrastructure, a modern megayacht facility was promised, as were repairs to major roadways using modern designs.

Ms. Flax-Charles led the discussion on “Tourism and Land and Homeownership.”

Ms. Flax-Charles also touched on creating an affordable-living community programme and making it easier for first-time homeowners to purchase property.

“Social Responsibility, Caring for our People, and Building Resilience” was the third segment of the 15 Point Glance, led by Sixth District candidate John Samuel.

In those areas, the party is promising to tighten border security; to boost internal security by making law enforcement jobs more attractive to the youth; and to increase insurance accountability.

The manifesto is available online.

The manifesto launch followed several other VIP events in the past week. After official Nomination Day proceedings last Thursday, the party’s candidates took to the streets to encourage voters’ support. Their motto of the day was “A New Colour for Valentine’s Day: Green.”

On Friday night, the VIP hosted a youth rally in Road Town.

Ms. de Castro addressed the youth and said that she refused to “entertain the notion that we are not ready.”

Performers at the event included DJ Benny Demus, TIMO of R. City, and Verse Simmonds, well-known artists from St. Thomas. Though the rally began at 7, the music went late into the night, with dozens of teenagers dancing in front of the stage.