With a new tourism season set to start on Dec. 1, hotels are outfitting rooms, boats are getting back on the water, restaurants are stocking up, and many other businesses …

END_OF_DOCUMENT_TOKEN_TO_BE_REPLACED 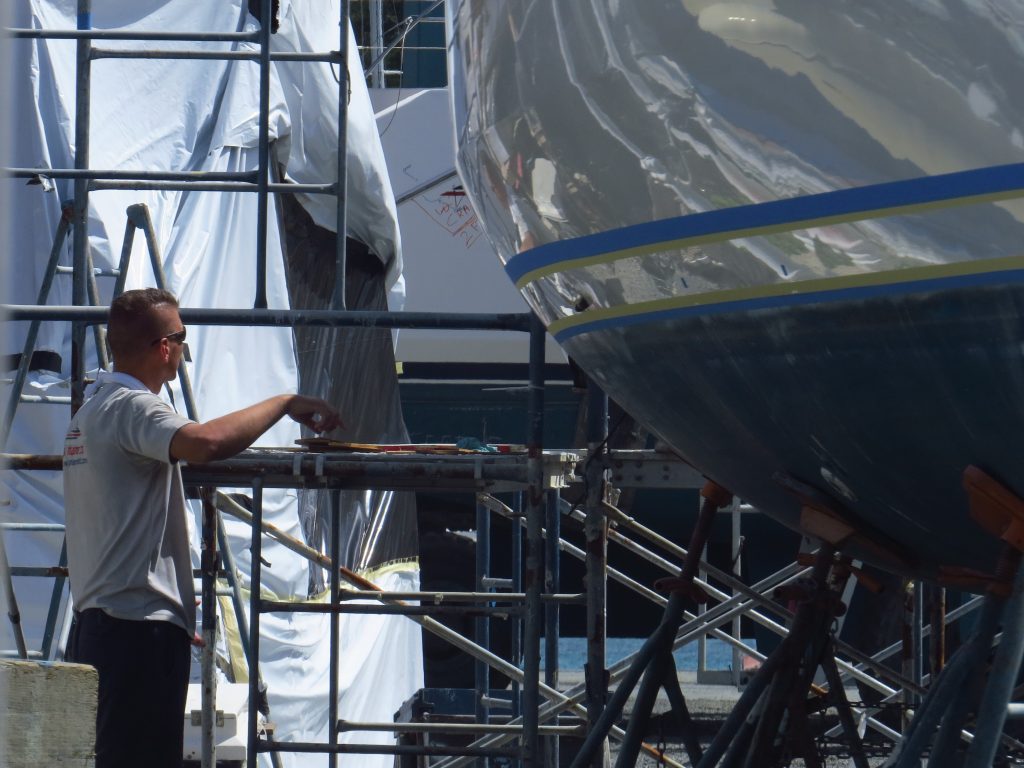 The slated reopening date for allowing tourists to enter the territory is just over five weeks away, and businesses across the territory are preparing. Work on yachts continues near The Moorings, above. (Photo: DANA KAMPA)

With a new tourism season set to start on Dec. 1, hotels are outfitting rooms, boats are getting back on the water, restaurants are stocking up, and many other businesses are making similar preparations.

But planning ahead has not been easy. With government yet to announce reopening protocols as of yesterday afternoon, community members have increasingly been calling for more clarity.

Business owners, particularly in the hospitality and marine sectors, still have many questions about the reopening, and wonder how the lack of information provided up to this point will affect the confidence of tourists looking to book a vacation.

Doug Riegels, an owner of the Anegada Beach Club and Loose Mongoose on Beef Island, worries that the reopening protocols he heard proposed in recent stakeholder sessions with government leaders could “kill the 2021 season.”

Premier Andrew Fahie announced this month that entry initially will only be allowed through the airports, not by sea. Officials announced Oct. 22 that seaports would open on Dec. 8 but provided no further details.

Citing recent conversations between business owners and leaders, Mr. Riegels said the planned restrictions likely will mean that flights will be spaced out with a minimum 90 minutes between landings to allow staff to coordinate quarantine procedures.

Even if the airport can keep a tight schedule and fill every plane while following social distancing guidelines, he calculates that the influx of visitors would pale in comparison to typical arrival numbers.

Mr. Riegels also said a proposed $250 fee for Covid-19 testing upon arrival could be cost prohibitive to families looking to visit the VI. Some countries in the Caribbean also require that visitors take another test after arriving, although the VI has not yet announced if that will be a requirement.

Cost is not the only factor vacationers will need to consider. Mr. Riegels said some stakeholders expressed concern about the security of visitors’ personal data if they are required to download an app to their phones designed to facilitate contact tracing, especially if it involves uploading private health information.

As of Aug. 21, the Bahamas has been mandating that visitors install the Hubbcat App on their phones for contact tracing. The Bahamas-based Eyewitness News reported in May, when the country began its phased reopening, that more than a dozen quarantined individuals left their facility before being officially released, and it was the government’s hope that introducing the electronic monitoring would prevent such issues.

Josie Tucci, vice president of sales and marketing with The Moorings and Sunsail, said other big questions in need of answers are where visitors will be allowed to quarantine, and for how long. If permitted by government, she added, some visitors may be able to quarantine on yachts.

“A lot of customers only have one week,” she said, noting they often spend a day or two of that vacation time traveling to their destination. “If you’re going to spend four days at the dock — … I think if that’s confirmed, a lot of people will probably postpone.”

She continued, “We just need more clarity, really, so we can tell customers what to expect.”

Company staff have been operating at other locations around the world since the territory shut down in March, and Ms. Tucci said learning how to work with the requirements of other countries in the Mediterranean has been helpful in preparing for the VI’s reopening, whatever it might entail.

As part of a relatively large traveling group, staff members have placed a priority on learning and complying with health and safety protocols to prevent the spread of illness, she said.

The company’s internal protocols include “everything, from the way we pack our linens, wash our cutlery onboard, do temperature checks — all of those things you would expect to see,” she said, adding, “The BVI is almost the last step in rolling those out. We’ve been testing the fogging machines for turnarounds in between charters.”

One other system The Moorings is rolling out will allow people booking a trip to meet via video with staff for online briefings, reducing face-to-face time while preparing for an upcoming visit.

During the next month and a half, many new and returning staff members will be doing all their typical post-hurricane-season work in addition to accommodating the new pandemic protocols, joining the skeleton crew that has been keeping up maintenance over the summer.

Ms. Tucci didn’t yet have an exact figure for how hiring numbers would compare to last year — an issue many employers face with the reopening. Bringing in the 100 or so needed staff members before the season is proving challenging with the current restrictions, she said.

Ms. Tucci also expressed concern for how tourism will be affected by limiting the point of entry to the airport given that many VI visitors typically travel to the territory via ferry after flying to St. Thomas. She said the increased travel costs could be a deterrent for visitors seeking a Caribbean getaway.

“It’s not going to be an easy situation if they don’t open the ferries,” she said.

As Dec. 1 approaches, businesses have to figure out how to adapt and persevere.

“We’re just taking our normal, sensible, return-to-business approach,” she said. “So there’s health and safety training — all of the protocols that we’ve been practising through the summer are being rolled out locally. We’re also having a look at what kind of testing facilities we could have ourselves, in addition to whatever is local. I think I can safely say that we [at The Moorings] are leaders when it comes to setting protocols and health-and-safety standards in this area when it comes to the charter industry.”

Ms. Tucci said she appreciates the guests who have been patiently waiting for the VI to reopen and are eager to be among the first to once again support business in the territory.

“Many of our customers are multi-time charterers to the BVI, and they just love the destination, love the people, and they have many, many memories there,” she said.

Chaunci Cline, head of hospitality at the BVI Chamber of Commerce and Hotel Association, said she advises business owners right now to be conservative in their preparations for the new season, being mindful of current and potential future economic constraints while staying positive about what the reopening could mean for the VI.

She also urged residents to remain vigilant in following social distancing guidelines not only to protect the health of the community, but also as a way to build confidence in the VI’s ability to curb the spread of any future outbreaks.

Though businesses like restaurants have been able to maintain some operations during the pandemic, preparing the hospitality industry for the new flow of incoming customers is new territory, she explained.

“It’s hard to prepare when we’re not sure what to expect,” Ms. Cline said.

Calculating what is needed for the reopening — for example, how much food a restaurant should stock — can be a major challenge when so little is known about what will happen with the reopening.

“I think right now, everyone is monitoring costs because of a lot of losses,” she said. “I’m sure many of the tourism sector [businesses] have experienced significant losses, so to preserve whatever cash they do have, I would encourage them to be conservative, but also prepare to market themselves.”

Ms. Cline also encouraged hospitality stakeholders to stay flexible and use social media to communicate with visitors before they arrive about the evolving information coming from government.

Ms. Tucci said it’s important for business leaders to keep a goal in mind for getting through this difficult time.

“There’s a tricky balance between health and safety, and economic viability of the country and the people,” she said. “It’s tough, it’s really tough. It’s the same everywhere. … But what I can say is that while we were in the Med, we only had one instance where a customer tested positive while on holiday. I think that’s a very positive thing. It shows that all of the protocols that are in place are pretty successful at preventing increased transmission.”