For Kelly Bradley of the Fort Worth Zoo, the Iguana Fest on Anegeda is the happiest day of the year. “This is my favourite day,” she said Monday. “I love …

END_OF_DOCUMENT_TOKEN_TO_BE_REPLACED 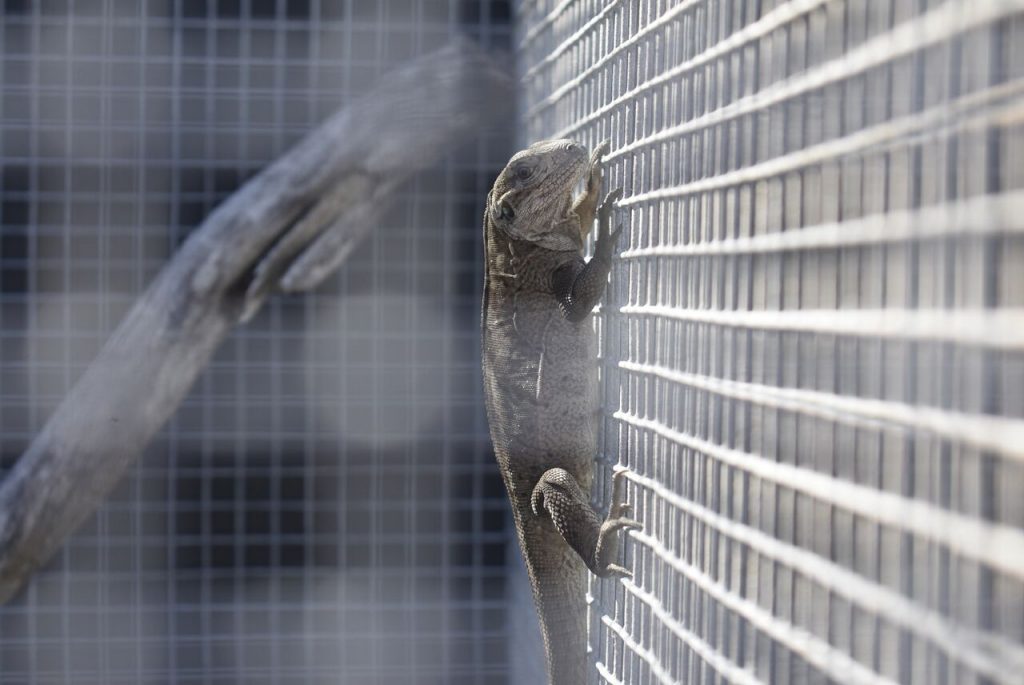 For Kelly Bradley of the Fort Worth Zoo, the Iguana Fest on Anegeda is the happiest day of the year.

“This is my favourite day,” she said Monday. “I love this day more than Christmas because it’s such a happy day and I get to talk about my favourite subject.”

The energy and excitement felt during the seventh Iguana Fest was contagious and seemed to infect children and adults alike. Community members gathered to celebrate the Anegada rock iguana, a critically endangered species endemic to the territory.

At the Anegada Iguana Headstart Facility in The Settlement, students from all the major islands of the territory participated in a day filled with games and activities centred around the lizards.

“It is the happiest day on Anegada,” said Ms. Bradley, who is affiliated with the Headstart programme and visits the island each year working to conserve the critically endangered Anegada rock iguana. “We start with the run in the morning and we have breakfast and we have games. Each of these games teach something about iguanas.”

With music by DJ Richie Rich and food set up by Bolo’s Backyard BBQ, adults were also entertained throughout the day as the iguana celebration continued.

This year, the facility has released more than 250 iguanas into the wild to encourage the growth of the population.

The facility was created in 1997 by the National Parks Trust and the Iguana Specialist Group, one of more than 100 specialist groups organised through the International Union for Conservation of Nature’s Species Survival Commission. It raises young iguanas until they are old enough to survive in the wild, thereby helping protect them from their main predators: cats.

“We know that 80 percent of what we put back makes it,” Ms. Bradley said. “When they’re 400 grams, we put them back in. A big female would be around 4,000 grams and a big male about 7,000 grams. Some people don’t like to see animals in cages, but we’re just getting them over that vulnerable period.”

In the past 30 years, the International Iguana Foundation — a Fort Worth, Texas-based non-profit organisation that works closely with the Iguana Specialist Group — has routinely estimated that around 200 to 300 individuals of the species remain living in the wild, mostly on Anegada.

If that number is accurate, the facility’s recent releases could have doubled that population. Still, the rock iguana is currently on the IUCN’s Red List and is considered a “critically endangered species.”

This designation, Ms. Bradley said, is one step above “functionally extinct.” To earn that label, a species would have no chance of survival because it would be unable to carry on its genes. With an additional 250 rock iguanas released by the Headstart facility, chances for the species to survive appear to be increasing.

The Headstart facility aims to guarantee the iguanas food, shelter and a safe place to lay eggs.

A grant from the Disney Conservation Fund helped pay for new cages, which were upgraded shortly before hurricanes Irma and Maria hit. The facility replaced all the rotted wood with new wood and made the cages heavier.

According to Ms. Bradley, it takes 20 people to lift just one of the several eight-cage units.

“They didn’t go up anywhere during the hurricane,” she said.

The facilities were barely affected by the storms. Some doors flew off and one of the larger cages was punctured, but a majority of the iguanas remained confined.

Having been around for seven million years, the wild iguanas already know a thing or two about survival. Not only would they have sensed a change in pressure and known to seek shelter, they also benefitted from the storms, according to the biologist.

“Hurricanes are really bad for people, but they’re really good for iguanas,” she said. “Because what happens is the hurricane comes and it gives all these plants a huge haircut and then it dumps all this water. All these plants poofed out with all new leaves. The iguanas gorged on all the soft, tender vegetation.

“And then you have the seed bank, which are all the seeds in the ground that haven’t germinated. When you dump all that water, all those seeds germinate. Out in the wild [the rock iguanas] were probably the fattest I’ve ever seen them.”

The species has adapted to the unpredictable weather here, and once had numbers up to 20,000 strong, according to Ms. Bradley. Anegada, she said, can easily support that kind of number.

The island may also be dependent on the iguanas for its own health: Ms. Bradley calls the lizards “farmers of the forest” because of the role they play in spreading seeds.

Seeds from the berries that the reptiles eat are deposited throughout the island and they create what Ms. Bradley described as a “mosaic of a forest — not just one kind of tree.”

“Then we’ve shown that seeds that travel through an iguana gut germinate faster: The little seedlings have a higher survivorship, and they have a faster growth. So there might be a coevolution where some of these plants are actually dependent,” she said, citing an example of a plant called “black sage” on the island.

The critically endangered plant, which is native to Anegada, is abundant in several areas heavily populated by the iguanas, Ms. Bradley said.

Of the 50 species of iguanas in the world, Ms. Bradley added, 16 are found in the Caribbean.

“We know that out of the 16 that are in the Caribbean this is the oldest of all of them,” she said. “Not only is it the most primitive, but it has the most unique volume of genes that you don’t see in any of the other 16.”

For example, three species of iguanas are found in the Bahamas, but they are all closely related and linked together genetically, she said. The Anegada rock iguana, by contrast, stands apart.

The community on Anegada has been very responsive in helping protect the species, Ms. Bradley said: Whenever a nest of young is spotted, residents often either call her or the National Parks Trust.

Ms. Bradley returns from Fort Worth to Anegada every July looking for nests, and she checks those nests two or three times a day, waiting for the eggs to hatch.