Cledius Sam, the head chef at Potter’s by the Sea, woke up early Saturday morning to trap lobsters off the shore of Anegada. By 9 a.m. Mr. Sam began cooking …

END_OF_DOCUMENT_TOKEN_TO_BE_REPLACED 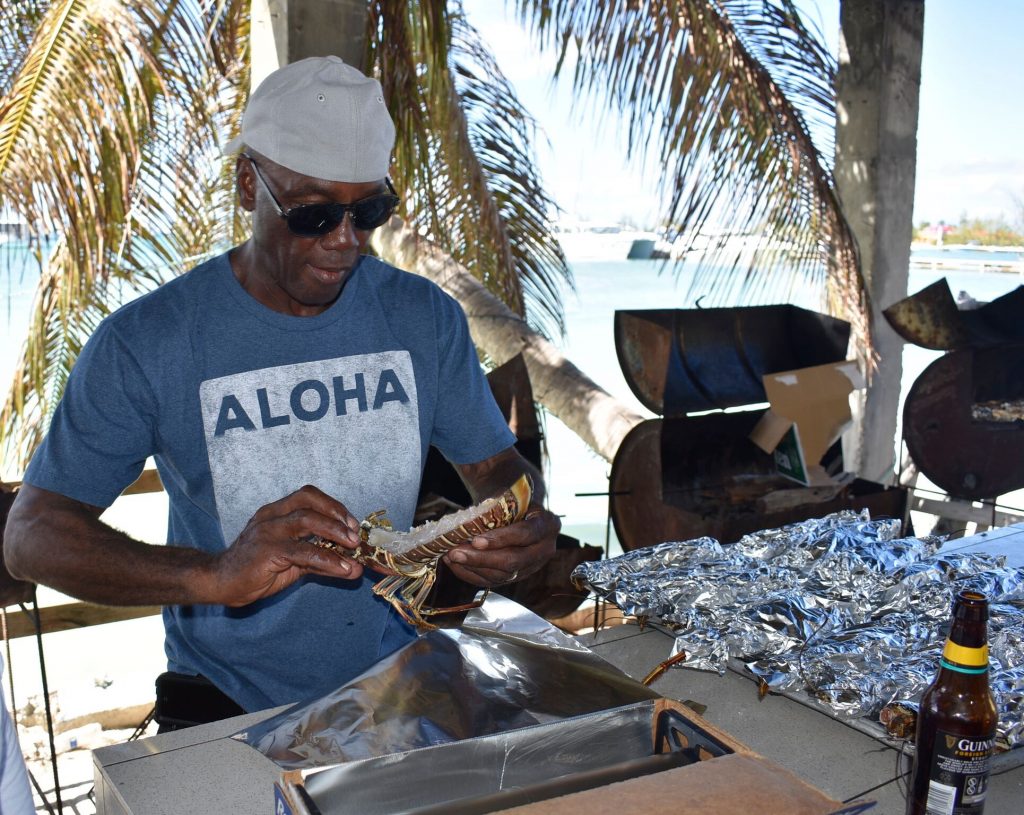 A chef at Potter’s by the Sea prepares to wrap a lobster in tinfoil and then smoke it on a grill. (Photo: JOEY WALDINGER)

Cledius Sam, the head chef at Potter’s by the Sea, woke up early Saturday morning to trap lobsters off the shore of Anegada.

By 9 a.m. Mr. Sam began cooking and cleaning the crustaceans in preparation for the island’s eponymous festival, which was in full swing by noon.

As visitors to the Anegada Lobster Festival arrived by the boatload, Potter’s open-air kitchen was busy with cooks lathering meat with marinade, smoking the crustaceans whole, and preparing the restaurant’s sample plate: a small mound of lobster fettuccine accompanied by a side of lobster curry with onion and tomato.

“People love them,” Mr. Sam said, explaining why he chose to feature these dishes, which have long been his festival mainstays.

Scores of people attended the weekend-long event, which capped off the ongoing BVI Food Fete by inviting visitors to hop from restaurant to restaurant sampling the different establishments’ lobster dishes, specialty drinks, and, in some cases, live entertainment.

Those who had travelled to Anegada via ferry were greeted at the Setting Point by a lively entry point replete with Food Fete tents doling out free rum punch and festival guides, and local vendors trying to entice customers early with their lobster meals and Jell-O shots.

Towards the end of the day, as more and more boats and dinghies arrived at Anegada’s docks and festival-goers spread around the island, Lennert Van De Meent rode a safari truck from Cow Wreck Beach back to Setting Point.

Mr. Van De Meent, a Danish national visiting a friend on Tortola, considered the shuttle service a highlight of the event, as it made travelling to various points on the island a cinch, he said.

For her festival sampler, Lobster Trap head chef Irva Vanterpool paired a deep-fried “lobster cake” with her own rendition of curried lobster, which she prepared by stewing the lobster meat with garlic, onion, red peppers and oil.

Having travelled a much shorter distance than Mr. Van De Meent to enjoy the festivities, Mike Kostecke was nonetheless excited for his first Lobster Festival experience.

According to Mr. Kostecke, who is originally from Belford, Michigan, but has lived in St. Thomas for about a year, the event has a reputation throughout the region as something that must be experienced.

“All I hear is ‘You gotta see the Lobster Fest,’” Mr. Kostecke said.

While waiting at Potter’s for his food to arrive, he said the festivities had largely lived up to the hype.

“The food is excellent,” he said, adding, “I like this island…. It’s very pleasant. I feel safe. The transportation is easy.”

Mr. Kostecke did note, however, that there were fewer revelers than he had expected.

Desne Remman, crew chief at The Wonky Dog, explained that Saturday is usually a bit quieter as the visitors that day mostly hail from other parts of the territory.

The pace did indeed pick up on Sunday, with hundreds of people enjoying the festival, in part because the barges that travelled to Anegada carried more people than the ferries available on Saturday, said Sharon Flax-Brutus, director of the BVI Tourist Board.

Morning rain temporarily slowed the action, but by day’s end the island’s car and scooter rentals were completely booked and everyone was having fun, Ms. Flax-Brutus said.

“It just made for a more adventurous crossing,” she said of the morning rain, adding, “Once on land everyone seemed to have a good time.”

Ms. Flax-Brutus added that this year’s event was the most successful Lobster Festival yet, though the BVI Tourist Board was still counting exactly how many people had attended.